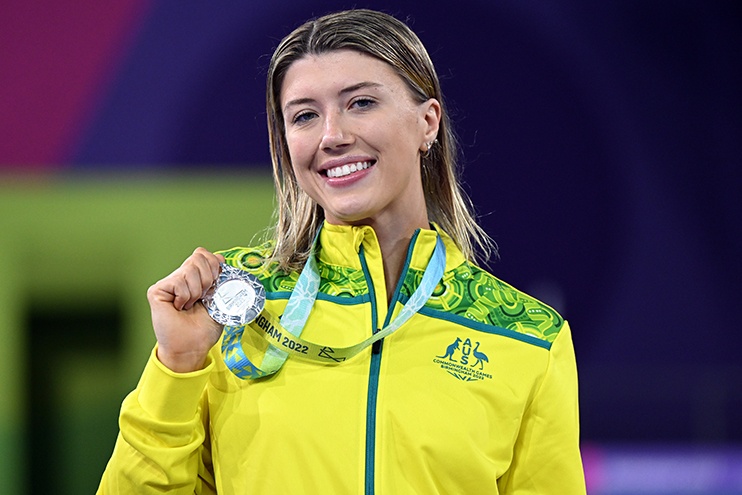 A thrilling penalty shoot-out for the Hockeyroos, double the medals in the decathlon and diving, and a drought-breaker in the wrestling highlight Day Eight action in Birmingham.

A thrilling penalty shoot-out for the Hockeyroos, double the medals in the decathlon and diving, and a drought-breaker in the wrestling highlight Day Eight action in Birmingham.

Australia may not have won gold on Day Eight in Birmingham, but it added two silver and six bronze, as well as setting up medal chances in athletics, hockey and table tennis.

A double in decathlon

In its final day of competition, the men’s decathlon went down to the wire, decided by the 1500m. Dan Golubovic took home silver for Australia, while Cedric Dubler joined him on the podium in bronze.

Coming into Day Two of competition, Dubler was in second place, Golubovic third and Alec Diamond in fourth. There were positional shuffles over the final two events, and in the end Golubovic’s 1500m win pushed him up on the podium for silver.

Dubler settled for bronze after a consistent two days, while Diamond finished in fifth.

Grenadian Lindon Victor took the lead heading into the 1500m and his fourth place finish in the 1500m was good enough to stay there for Grenada’s first medal of the Games.

In a leading group of three, Carter was unable to find his way in front of England’s Nathan Maguire and Daniel Jonathon Sidbury. Fellow Aussie, Jake Lappin came fourth.

Michelle Jenneke and Celeste Mucci have qualified for the 100m hurdles final on Sunday at 7:25pm AEST, while Ella Connolly, who is new to the 200m, has made the final by finishing second in her semi-final with a time of 23.41. Her final will be run on Sunday morning at 6:44am AEST.

Three Australians - Jess Hull, Linden Hall and Abbey Caldwell - are through to the final of the women’s 1500m final to be raced on Monday morning at 4:20am AEST.

Steve Solomon had a nervous wait, but has qualified for the 400m final with his time of 46.30. The final will be run on Monday evening at 7:30pm AEST.

Sadly, Nicola Olyslagers has had to withdraw from the women’s high jump final due to a significant tear in her calf in her jumping leg.

It was a tense finish to the women’s hockey semi-final late on Day Eight, as Australia proved too poised for India in a 3-0 penalty shoot-out.

In the opening quarter, Australia scored through Rebecca Greiner who made a stunning deflection into the goal from a cross into the circle by Mariah Williams.

India equalised in the fourth. With 11 minutes to go, Vandana Katariya’s stick got on the end of a shot into the circle and the game was level. There were no further scores, despite penalty corners and referrals right to the last 60 seconds.

Controversy came in the shoot-out, when Rosie Malone was given a retake after the shot clock didn’t start. After missing her first attempt, Malone made the second and gave Australia the lead.

India was blocked by Jocelyn Bartram, who came on for the shoot-out with brilliant effect. Kaitlin Nobbs nailed her goal, India missed once again and Amy Lawton flicked one over the stick of India’s keeper for a 3-0 lead.

With it all on the line, India’s Kaur Navneet couldn’t make the shot and Australia celebrated moving through to the gold medal match, 1-1 (3-0).

They will now play England, who won through via a penalty shoot-out over New Zealand, at midnight Sunday (12:00 AEST).

Springing into the diving medals

Australia won three medals on Day Eight at the diving pool. Four years on from her sixth place finish in the 10m platform, Brittany O’Brien’s return to diving - nine metres lower and on a springboard - resulted in a silver medal.

In the women’s 1m springboard final, O’Brien recovered from a lower scoring third dive to make little splash and score big on her final two dives for a medal.

Australia’s impressive day at the pool continued with Domonic Bedgood and Cassiel Rousseau’s bronze in the men’s 10m synchronised platform.

It’s been 12 years since Australia last won a wrestling medal, but Jayden Lawrence has performed impressively for bronze in the 86kg division.

A long time coming, Lawrence fought through a leg injury, a torn ligament in his knee, sustained in the previous match against Pakistan to come away with bronze.

Irene Symeonidis also made a bronze medal match, but was not able to come away with the win against Nethmi Poruthitage from Sri Lanka.

It’s an all-Australian gold medal match in the para-women’s singles table tennis, with Qian Yang and Lina Lei both winning their semi-finals. They will now face each other, with another two medals guaranteed for Australia on Sunday morning 2:30am AEST.

Another chance for gold will come when Lin Ma, in the para men’s singles, also plays for gold on Sunday evening at 7:10pm AEST.

In the mixed doubles table tennis, Nicholas Lum and Min Hyung Jee dominated their way through the competition on Friday and will face India in the semi-final, at 10:30pm.

The women’s doubles team of Tracy Feng and Yangzi Liu move through to the round of 16 after a win over a pair from St Vincent and the Grenadines. Min Hyung Jee and Jian Fang Lay also enter the round of 16 with a win over Malaysia. Both teams play at 6:30pm AEST on Saturday.

Lum and Finn Luu took their men’s quarter-final to a deciding game, defeating Nigeria 3-2. They’ll go on to face India in the semi-final at 9:25pm AEST on Saturday.

Yangzi Liu is also through to a semi-final in the women’s singles after a win over Wales. She will play at 8:40pm AEST for a place in the gold medal match, gunning for Australia's first women's singles title.

The vibes were good on the sand of Birmingham, as both Australian pairs progressed through their beach volleyball quarter-final match ups in strong form.

Taliqua Clancy and Mariafe Artacho del Solar were too good for Scotland on the women’s side, securing a dominant straight sets win 21-11, 21-11.

The Australians now play England in the semi-final.

Australia’s two men’s doubles teams have also progressed through the round of 16 and will contest quarter-final matches on Day Nine. Pilley and Rhys Dowling will take on England, while Zac Alexander and Ryan Cuskelly face the Scots, including Greg with partner Rory Stewart.

In the individual all-around final, rhythmic gymnast Alexandra Kiroi-Bogatyreva has picked up a bronze medal, one point behind silver medallist Anna Sokolova of Cyprus and 1.1 points behind gold medallist Marfa Ekimova who won in front of a home crowd. Lidiia Iakovleva finished in seventh place.

Iakovleva will now compete in the hoop final, while Kiroi-Bogatyreva will feature in the ball, clubs and ribbons finals.