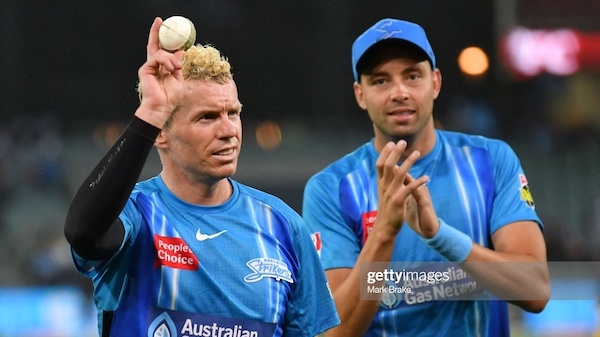 The Adelaide Strikers' captain Peter Siddle took five wickets in a comprehensive seven wicket defeat of the Hobart Hurricanes, to elevate themselves off the bottom of the Big Bash standings.

The Hurricanes were forced to make a couple of changes to their side ahead of this clash, with international players Harry Brook and Jordan Thompson ruled out as a COVID precaution.

Caleb Jewell and Mitch Owen took their places in the starting XI, while Mac Wright was named as the solo available X Factor and was injected into the game for Wil Parker.

After electing to bowl, the Strikers struck early. In his first match for the season, Strikers' pace bowler Harry Conway bowled Matthew Wade with his third delivery.

Adelaide skipper Siddle took his first shortly after, removing the dangerous Ben McDermott for just 11 runs. Thomas Kelly sat comfortably under the catch in the outfield.

Peter Handscomb came to the crease and started to put some runs on with D'Arcy Short, before miscommunication of a second run had Hobart sacrificing Handscomb, run out for 13.

A Rashid Khan delivery that stuck slightly on the damp surface, was popped up by Caleb Jewell for an easy catch for the spinner.

Tim David headed out to the middle to join Short, and tried to bring a partnership together for the Hurricanes. David immediately hit the ground running, including a six slogged into the SACA Member's stand.

The X-Factor was activated at the 10 over mark, with Mac Wright coming in for Wil Parker and adding some leg spin to help defend the side's total.

At the loss of D Short, bowled by Matt Short for 32, the Hurricanes were starting to sweat. With only 88 runs on the board and few batting options remaining, they were under some pressure to make a defendable total.

Hobart took the Power Surge and Siddle put himself in with the ball. He bowled a couple of nice deliveries before getting his man David by ripping through the stumps.

The wickets continued to tumble, with Siddle taking three in the last over of the match to bowl Hobart out.

He sent Owen, Wright and Sandeep Lamichhane back to the dugout, and Hobart finished all out for 126.

Henry Hunt opened the batting with Short, in a change from the Strikers' batting order from their loss to the Thunder.

The pair started strong, and Hunt looked more comfortable starting at the top for the Powerplay, as he does in Shield cricket, rather than coming in later in the innings.

He fell for 18, caught by D Short off the bowling of Lamicchane, but luckily for the Strikers, Short took over from there.

Matt Renshaw played the support act out in the middle, while Short whacked sixes into the SACA Members and guided the ball to the boundary for four.

After picking up the Bash Boost point once again this season, Adelaide continued to charge towards the 127 run target.

Lamicchane picked up a second wicket, Renshaw mistimed the flick off his foot and was caught at mid-on by David.

Jonathan Wells joined Short at the crease and the pair were cruising to victory. Short hit his half-century and went on with it tonight, seeing out the chase for the first time this season.

With just two runs required Wells picked out the fielder in Owen at midwicket, and departed for 11.

Regular opener Jake Weatherald arrived at the crease much later than usual and survived an lbw appeal on his first ball.

He was able to watch on as Short nailed the final runs, a boundary pulled past backward square completing the job for the Strikers.

Short was named Player of the Match for his 72 not-out, taking the honours ahead of his captain who finished with five wickets.

Hurricanes bowler Riley Meredith came from the ground with a "little rib thing going on", as expertly explained by Hurricanes' coach Adam Griffith on the Channel 7 broadcast.

They'll be hoping it's just a sore side and not a strain, with the tournament only picking up in pace from here.

The Strikers host the Stars on Friday night at Adelaide Oval, while the Hurricanes will travel to Brisbane in the hope of playing the Heat on Saturday night.