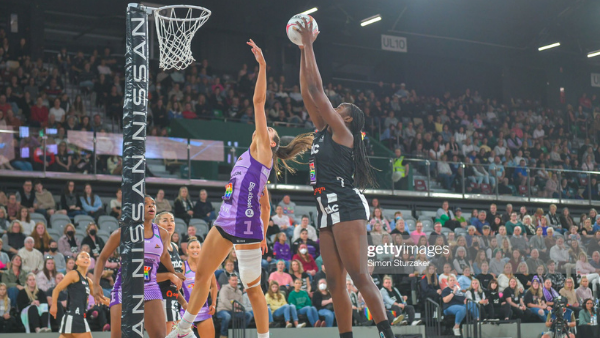 Collingwood Magpies keep themselves right in contention for finals with a strong four point win over the Queensland Firebirds in Tasmania.

Collingwood Magpies keep themselves right in contention for finals with a strong four point win over the Queensland Firebirds in Tasmania.

Led by Shimona Nelson scoring 65, the Collingwood Magpies have kept themselves right in finals contention with a strong four point win over the Queensland Firebirds in Tasmania, 71-67.

Collingwood were strong from the very first whistle, getting out of the blocks early with four unanswered goals before the Firebirds got on the board.

Magpies' shooter Shimona Nelson played a huge role in the match; the Firebirds' defenders had no answer for Nelson, who finished the match 65 goals, shooting at 98 percent accuracy.

“Shimona, each week she steps out on court, I think she just gets better and better for us,” Nicole Richardson said post-match.

“What I'm really happy with is just her strength in the air at the moment. You know, there's been years gone by where Shimmy was dropping balls and a few things like that, but I think she's been very clean.

“Her aerial skills are as good as ever, she's ripping the ball in and really demanding the ball underneath the post. I mean, she shot 65 goals today and only missed the one, so you know that's outstanding.

“I thought Sophie [Garbin] and Gabby [Sinclair] both played a good role in terms of sweeping to pocket or sweeping to top to draw a defender to try and isolate Shimmy at the post. So, you know, it was a collective attack focus, which has been pleasing.

“I think Shimmy was surprised by her performance when I told her the number of goals that she had.

“I'm super proud of what she's done and how she's grown as an athlete on court across this season, and I was saying to someone earlier that I think shimmy is so aeriel, but what we've seen now is she's been able to combine those aerial skills with strong hands.

“I think particularly our last four or five matches have been very solid in the air, and she's demanding the ball.

“When Shimmy is fully engaged in the game, and, you know, that she's in and for a good game, I was very pleased with what she did today."

The Magpies midcourt also was strong, with Molly Jovic in the centre shutting down Firebirds' captain Kim Ravaillion, and Kelsey Browne having a huge impact with 27 goal assists.

Richardson said that she was happy with the fact that the pair stood up in late moments of the match.

"I think she’s (Molly Jovic) finding some good form at the moment. So, I particularly, you know, her connection as well with Kelsey.

"I think the two of them were using their speed and also a bit of change of pace when needed, and both have been very good with the ball as well.

"There hasn't been a lot of turnovers between the two of them. So, both of those are very important players within our attack and, as well, I guess the most pleasing thing for me was when the timeout was called right towards the end there, and I had a chat to them, was about a collective defensive effort in those last two and a half, three minutes and both those were the two players that came up with turnovers a critical moment in the game.

“So, you know, not only are they working hard to rescind attack but also getting back hard and doing their defensive role as well.”

The Magpies were able to get out to a 12 goal lead early in the second quarter before the Queensland Firebirds started to wrestle back the momentum.

Richardson said that the positive was that it's the first time in a while that the Magpies have been in a position to have that strong of a lead.

"So, for me, that was a positive to be able to do that and particularly at the start of our third quarter, we came out of the blocks well and really were able to get that.

"I think from there, credit to Queensland they're a classy outfit as well. So we knew that they would come back at us. I think the message was there, we've got a really good short game now, and we've proven over the past four weeks that we're able to play possession, whereas in the past in previous years, we probably haven't had that capacity to do that.

"So, basically, the instruction once they came back at us quite hard, the instruction was to make sure that we still want to be smart with our game plan. So I was really wanting them to chip away and play a bit shorter because the balls that we lost we were throwing long into Shimmy or throwing cross court, which allowed them to come out and have a fly at. So once we're able to shorten the game up. I thought that helped us get flowing a little bit."

Despite the Firebirds not being able to get the win, the Firebirds still had reason to celebrate with Gretel Bueta playing in her 100th game.

"There's not too many people in that club and knowing that she started netball quite late coming from basketball, I think it's a really special achievement," Firebirds' coach Megan Anderson said post match.

"It's a shame that we couldn't get the win for her, but hopefully next week we can get one back and get a win on a 101st game."

"I was proud of the fight back of the girls," Anderson said.

"We definitely made it hard for ourselves in the first and second halves. I just felt like we were chasing the whole game. So it was a disappointing start from us tonight."

The Magpies were able to shut down the Firebirds early, with Firebirds not able to get their hands on the ball. Anderson said that her side struggled all over the court.

"All over the court [we struggled], to be honest, in the early parts of the game. I thought Magpies were really accurate and safe with the ball in attacking, and they really shut down our space in with their defensive structures as well.

"I thought Jemma (Mi Mi) came on and opened it up for us in attack and I think when we made the change with Kim Jenner on there and goalkeeper that we were able to turn over a bit more opportunities."