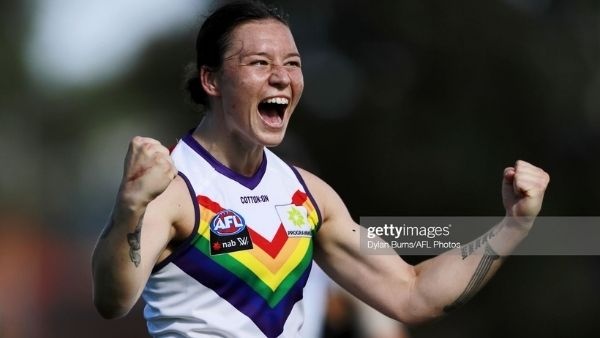 It was a second half masterclass by the Fremantle Dockers that saw them come away with a 31 point win over Collingwood at Victoria Park.

It was a second half masterclass by the Fremantle Dockers that saw them come away with a 31 point win over Collingwood at Victoria Park.

After keeping the Magpies scoreless in the second half, Fremantle ran away with a 31 point win at Victoria Park to kick off Round Four of the AFLW.

Fremantle started off where they left off with a quick inside fifty entry withRoxanne Rouxtaking the mark and then going back and kicking the goal.

Fremantle's tackle pressure was relentless in the first term with the Dockers leading the tackle count 11-6 with three minutes remaining in the first quarter.

As well as the Dockers being on the receiving end of six holding the ball free kicks with Collingwood having zero.

It showed out on the field with that sense of hesitancy from the Magpies every time the Dockers approached.

It was a low scoring first quarter with the Dockers leading by six points (7-1).

Collingwood drew the first blow in the second term with a goal from Brittany Bonnici.

Fremantle quickly responded with a nice goal from captain Hayley Miller kicking the goal from 45 meters out.

Desperation came from the Magpies towards the end with the first quarter with a desperate smother fromJaimee Lambertrelieving the pressure temporally for the Magpies.

A free kick with seconds left of the second term a free kick went the Dockers' way inside their attacking fifty but instead opted for the advantage and the siren beating them to goal.

Although dominating the second quarter the Dockers went into the half time break with an 8 point lead (15-7.)

Fremantle continued to bring the heat in the second half with a nice run down tackle fromAnn McMahon.

Just as the Magpies looked like were going to create an opportunity in the forward 50, a tackle fromJessica LowonChloe Molloyprevented Collingwood from getting the run.

Collingwood defensive pressure was put under the microscope but the backline did well to keep the Dockers goalless in the third quarter.

Fremantle scored three behinds in the third term extending the lead to twelve points keeping the door open for the Magpies going into the final term.

Fremantle was finally rewarded for its effort in the final term with captain Miller kicking her second goal, putting it just out of reach for the Magpies.

Gemma Houghtonfinally got a goal after three behinds in the first three quarters, kicking a nice goal from the pocket.

Ebony Antonioput the icing on the cake with a goal taking the Dockers lead out to 31 points.

Kiara Bowers was able to shake off the Ebony O'Dea tag having 26 disposals and seven tackles. Miller played an important role with 19 disposals and two goals.

For the Magpies Bonnici was among the best having 25 disposals as well as the Magpies only goal and her second in her AFLW career.

The statistics told the story with 17 holding the ball calls going the way of the Dockers which was a credit to the pressure around the ball and not giving the Magpies an inch.

Collingwood will look to come out firing when they face the Eagles at Victoria Park on Tuesday. While the Dockers will travel to Hobart to face North Melbourne next Sunday.