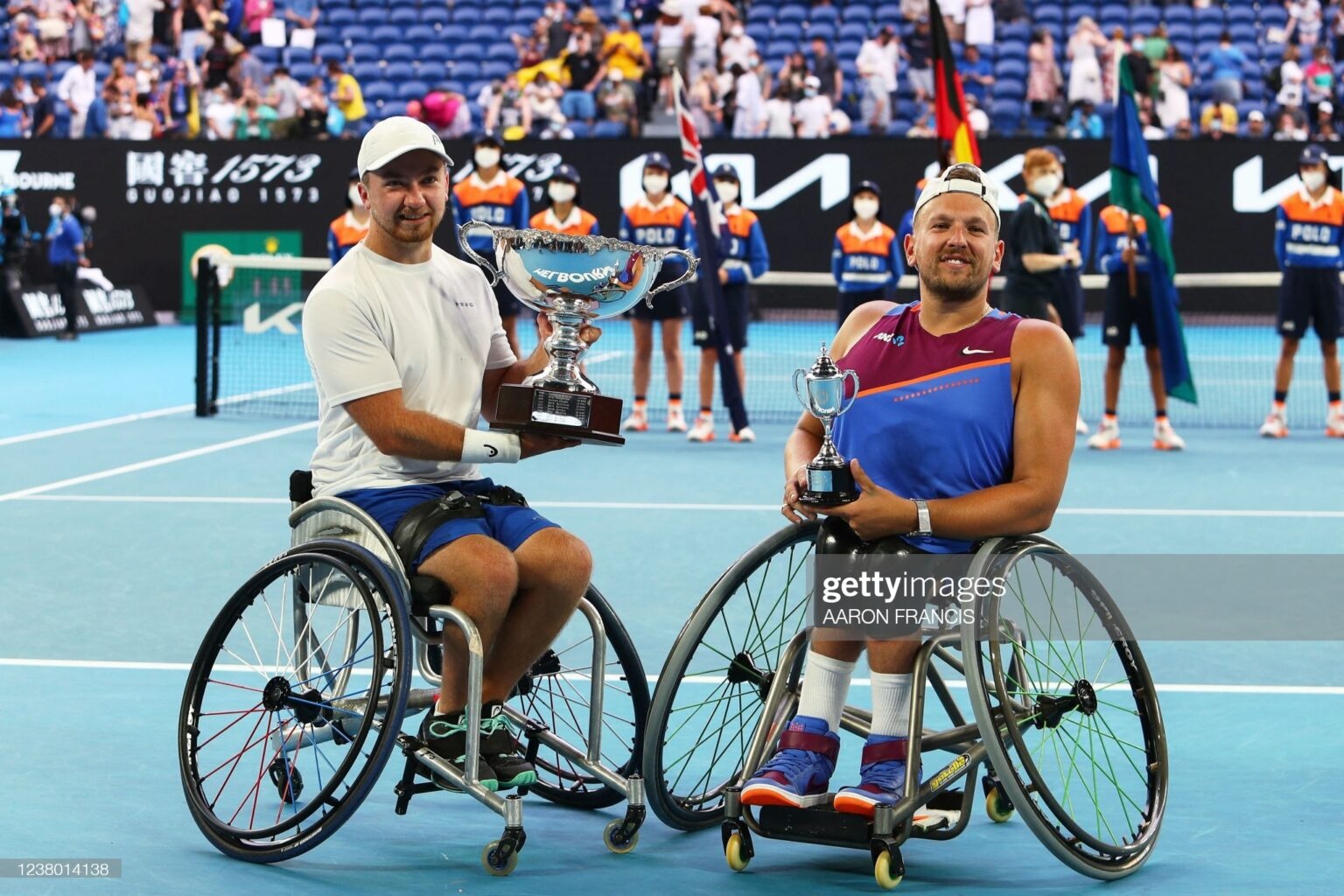 As Dylan Alcott's tennis career came to an end it was Dutch youngster Sam Schroder who took home the Quad Wheelchair Singles title for the first time.

As Dylan Alcott's tennis career came to an end it was Dutch youngster Sam Schroder who took home the Quad Wheelchair Singles title for the first time.

The rivalry that has defined Men's Quad chair singles tennis over the past 18 months came to a close today with Sam Schroder claiming his maiden Australian Open title in straight sets.

After nine incredible years competing in Grand Slams Dylan Alcott's tennis career came to a close with just as much fire and personality as his first appearance at Melbourne Park in 2014.

But the fairytale ending of winning a record eighth Australian Open title wasn't to be after Sam Schroder played one of the best matches of his career.

In a historic change, the Quad Wheelchair Singles Final was on centre court for the first time this year, with fans streaming in to enjoy the final match of the newly minted Australian of the Year.

Schroder's serving didn't get off to the best start, faulting on all of his first serves in the opening game including one double fault to help Alcott to go up a break 40-0.

However, the same couldn't be said about the Dutchman's backhand return of serve which was near impossible for Alcott to return, resulting in three winners in the second game, which helped him break back to level the scores.

Despite the packed Australian crowd cheering him on, the loudest voice in Rod Laver Arena was always Alcott, revving himself up after a particularly good serve or shot. But it didn't put Schroder off who won his next two service games and took the Australian to deuce in his next service game.

It wasn't until the ninth game that Alcott really got a chance to attack Schroder's serve again, lasting over 10 minutes and going to deuce nine times, with Schroder seeing off four break point opportunities but Alcott was too good on the fifth, taking a 5-4 lead to try and serve out the set.

But it wasn't to be with Schroder breaking to bring it back on serve due to two unforced errors from Alcott keeping the second seed in the set.

Schroder's serve was tested once again in the eleventh game of the first set with Alcott fighting his way back into the game from 40-15 down, but the Dutchman managed to hold out in the eight-minute game.

Despite serving two aces in the final game of the set Alcott was unable to convert after going 40-15 up, and Schroder forcing longer rallies caused more errors from the Australian to take out the set. Marking the first time since his US Open title that Schroder was able to take a set from Alcott.

Longer rallies definitely favoured the Dutchman in the first set, with Schroder winning the vast majority of rallies that went for five shots or more, meanwhile, Alcott's serving was elite, serving six aces in the first set, although it was at the expense of four double faults.

The Australian struggled at the beginning of the second set, dropping the first three games as the unforced error count continued to climb with Schroder able to draw out longer rallies.

It didn't get much better for Alcott who was soon in the unfamiliar position of being down four games in the set. Struggling on serve after losing four consecutive service games across the set while Schroder seemed to get more comfortable.

Alcott needed to find a way to not only break but to win off of his own serve to stay in the match but Schroder wasn't going to let up and after coming back from 40-15 down in the final game of the match, all it took was one Championship Point for Schroder to claim his second Grand Slam title.

"Firstly, congratulations to Sam, mate, you deserved to win today. You were definitely the better player," Alcott started

"To the Australian Open, I love you so much, thanks so much to Jane and Craig and everybody for changing my life but also backing someone who is disabled to be the front of your brand.

"You changed my life but that award I got a couple of days ago maybe helped to change some more lives as well.

"It's not all around the world where every single locker room that we go into there's wheelchair tennis on and every single professional player, the top 10, men, women, they're all watching and they all know.

"They all know now and it's because it started on this court, right here, together, so I'm very thankful."

Schroder gracious in victory thanked Alcott for what he'd done throughout his career for disabled kids and how he's inspired people.

"First of all I want to say congrats to Dylan on an amazing career, you've inspired so many people to

get out there and play sports, you know disabled kids watching back home.

"I know you've done a great job, inspiring the world and I hope to one day to do even just one small part in that as well.

"So thank you for all that you've done."

The Australian Open Champion also thanked the Aussie crowds for coming to watch the final.

"It's always great being back here, I love the weather, I love you guys, coming to watch is really special.

It was a very special moment for me watching so many people come and watch us and cheer us, it doesn't happen all that often actually for wheelchair tennis so I hope you guys will be back here next year as well."