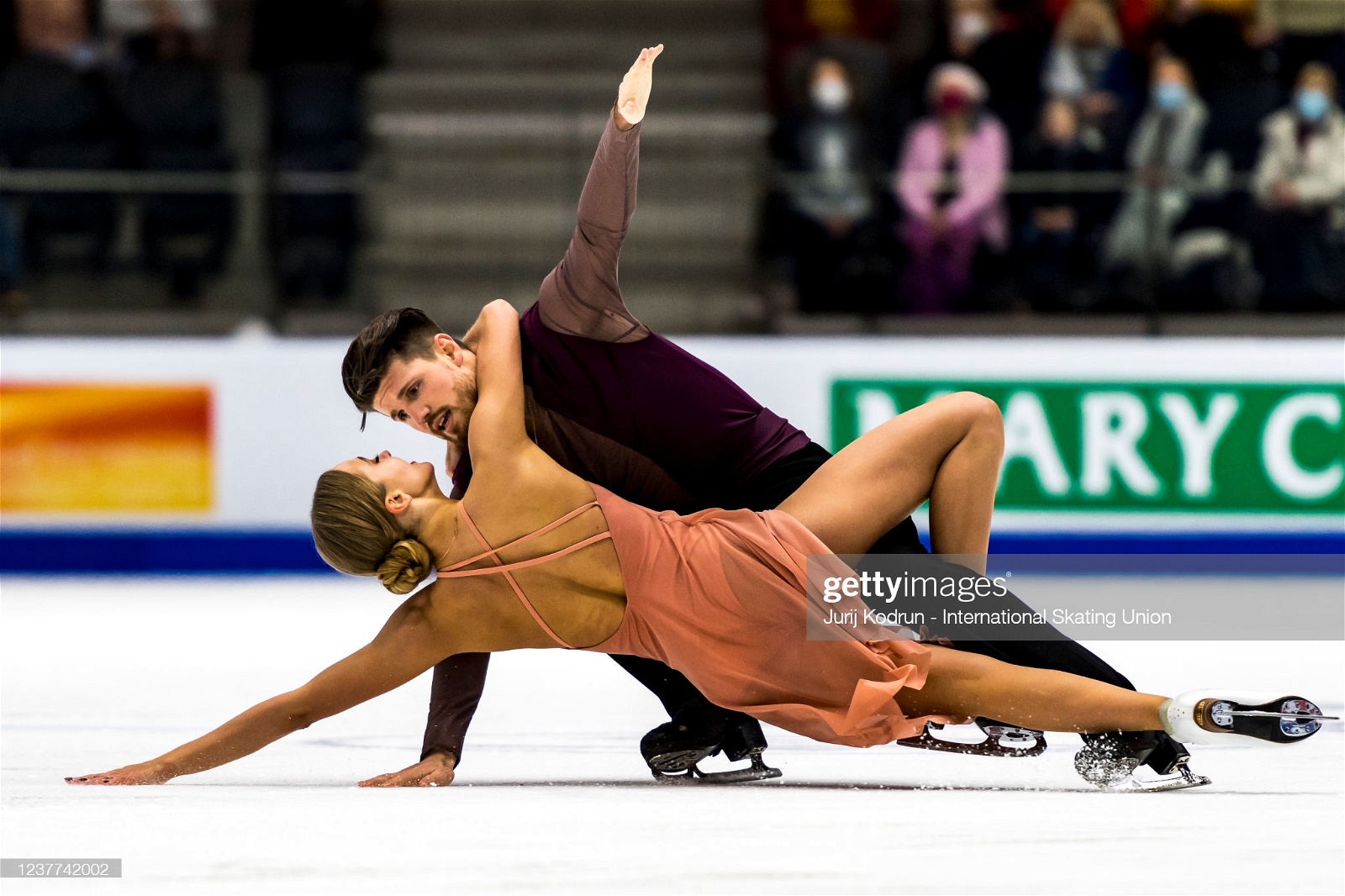 Of the newly crowned champions, three of the four made their Euros debut this year.

Many skaters scored new personal and season’s bests, proving to their federations that they are set to peak in Beijing on the Olympic stage.

It is likely that we will be seeing a similar slew of COVID-related withdrawals, whether it be as a precautionary measure or due to a positive test, at Four Continents Championship that will also be held in Tallinn next week.

Skaters who have had their Olympic spots confirmed will be endeavouring to stay cautious in the weeks leading up to Beijing.

Consistency and cleanliness won out in the end for the men.

Mark Kondratiuk won gold, coming in second in the short program and winning the free skate. Like at Russian Nationals last month, his ability to deliver solid performances across two programs where his competitors falter is what earned him the title.

Italian Daniel Grassl was the only skater in this competition to successfully land a quadruple flip, lutz and loop, which earned him the silver medal. After Euros, Grassl now finds himself number one in world standings going into the Olympics.

Latvian Deniss Vasiljevs was the surprise bronze medalist after delivering the free skate of his career. Whilst he had slightly easier tech content than his competitors, with only one quadruple jump across two programs, the quality of his components, spins, and step sequence made up for the points he missed in difficulty.

After the short program, it had looked much like the men’s event was going to be a Russian sweep, with Andrei Mozalev in first and Evgeni Semenenko in third. However, both Russians had numerous major errors in the free skate.

Russia is yet to announce their selection for their Olympic team, however, at this stage Kondratiuk seems a sure bet, alongside Mikhail Kolyada who withdrew from Euros citing an ankle injury. Mozalev’s better result here may have just given him the slight edge for that third spot.

Despite some major errors, the Russian women still swept the podium at Euros, relying on difficult quadruple jumps to place them ahead of the rest.

Kamila Valieva handily won gold, breaking her ninth world record this season with her short program score of 90.45, a 3.03-point improvement on her previous record-breaking score.

She had a rougher free skate, with a fall on the triple axel and a shaky euler during her combination being called as a step out, subsequently invalidating the second jump.

The quality of the rest of her elements, as well as her cushy lead after the short program, kept her ahead of the pack to cinch her first European gold.

Anna Shcherbakova climbed up to second place after a costly error in the short program, in which she missed the second jump in her combo. Despite only attempting one quadruple jump in the free skate, her cleanliness proved enough for her to end up with her second European silver medal.

A slew of falls and shaky landings plagued bronze medalist Alexandra Trusova across both her programs. She continues to have little success with her triple axel, falling once again on it in the short program.

Belgian Loena Hendrickx delivered a standout performance in the short program, which had put her second behind Valieva, however, she was unable to keep up the momentum, with an error-filled free dropping her into fourth.

The pairs event was a lot less eventful, with the Russians sweeping the podium.

2020 European Champions Aleksandra Boikova/Dmitrii Kozlovskii wound up in third place overall with a season’s best score of 227.23. A pop by Boikova on the side-by-side triple salchow proved costly for them.

Their compatriots Evgenia Tarasova/Vladimir Morozov finished second overall, getting a record-breaking score of 154.85 in the free skate, despite a hand down from Tarasova on the opening side-by-side triple salchow.

A couple of lost levels in the short means that there is still room for them to improve on those scores, come the Olympics. Such scores would make them hard to beat, even by the Chinese teams who are the firm gold medal favourites.

Mishina/Galliamov and Tarasova/Morozov’s performances here make them the firm favourites for the team event at the Olympics, where Russia will be aiming for the gold medal.

Their performance here demonstrated to the judges and their federation that they are ready for the Olympics, where they could challenge gold medal favourites Gabriella Papadakis/Guillaume Cizeron for the top podium position.

Finishing behind them with the silver medal are their compatriots Alexandra Stepanova/Ivan Bukin with personal best scores in the rhythm dance and combined total.

Their score of 213.20 certainly makes them in contention for a podium position in Beijing, against the American teams Madison Hubbell/Zachary Donohue and Madison Chock/Evan Bates and Canadian team Piper Gilles/Paul Poirier.

Based on their Euros performance, it is likely that the Russian Federation will assign both Sinitsina/Katsalapov and Stepanova/Bukin to compete in the team event.

Bronze medalists Charlene Guignard/Marco Fabbri earned a very solid 207.97 total with very high levels on their elements across both programs.

Smart/Diaz won their previous head-to-heads at Finlandia Trophy and Spanish Nationals, and their fourth-place finish at Euros above Hurtado/Khaliavin’s sixth-place finish simply sealed the deal.