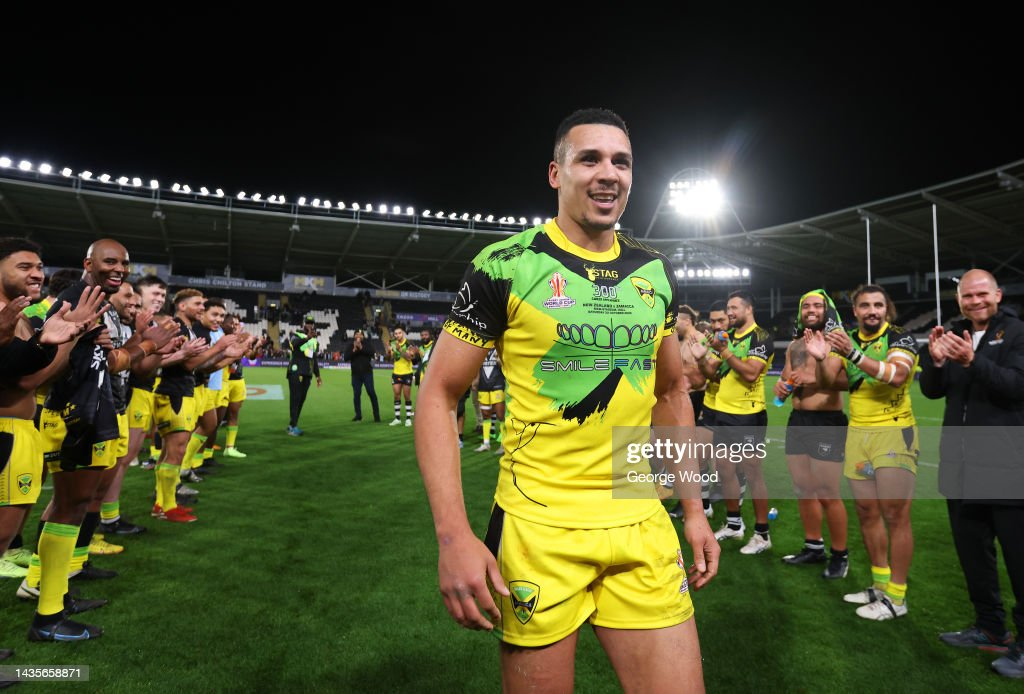 In the lead-up to the final between Australia and Samoa this weekend, we looked back on the top six history-breaking and history-making highlights from the World Cup so far.

In the lead-up to the final between Australia and Samoa this weekend, we looked back on the top six history-breaking and history-making highlights from the World Cup so far.

The 2021 Rugby League World Cup was well worth the one-year delay. In the lead-up to the final between Australia and Samoa this weekend, here are the top six history-breaking and history-making highlights from the World Cup so far.

England’s 94-4 defeat of Greece in Round 3 is its biggest victory in World Cup history. This 90-point win margin surpassed England’s previous 72-point win margin record, which it set in 2000 when it defeated Russia 76-4.

Three of the top four biggest wins in a Rugby League World Cup tournament were set this year, with Tonga’s 92-10 defeat of the Cook Islands in Round 3 sitting in fourth place. Australia’s 84-0 win over Scotland in Round 2 of the 2022 World Cup tournament was, fleetingly, the second-highest win margin ever, but England’s win over Greece now claims this title. All three of these thrashings fall short of Australia’s 110-4 triumph over Russia in 2000.

England’s most tries in a World Cup match

Jamaica made its World Cup debut in this year’s tournament, having beaten the United States to qualify. Arguably one of the most heart-warming moments of the 2022 Rugby League World Cup was when Ben Jones-Bishop scored Jamacia’s first-ever Rugby League World Cup try. It came in Jamacia’s 68-6 loss against New Zealand in Round 2. Jones-Bishop plays for the Sheffield Eagles in the RFL Championship and is a two-time Super League winner. The 34-year-old fullback scored the try in the 75th minute of his 300th career game, making the milestone all the more special.

In addition to Jamacia, Greece made its Rugby League World Cup debut in 2022. While Greece lost all three of its games, the fact that the nation qualified was an achievement in itself. Greece has been attempting to enter the World Cup competition for almost 20 years. Players were often arrested for playing the sport and matches were held in the middle of the night to avoid such sanctions. In August this year, the Greek Rugby League Federation (GRLF) was recognised as Greece’s legal governing body for rugby league.

The Rugby League World Cup 2022 is the most-watched World Cup in history. According to the Rugby League World Cup website, the domestic cumulative match average until November 6, 2022, was more than 18.7 million viewers. Match attendance has also been strong, with the Semi Final between England and Samoa drawing a crowd of 40,489 people. This is the second-highest World Cup Semi-Final crowd number ever, surpassed only by a doubleheader in 2013 that attracted 67,545 fans.

This tournament is Samoa’s best series yet, especially given that it didn’t win a single game in its 2017 World Cup campaign. Samoa overcame Tonja in a 20-18 thriller to make its first Semi-Final. It also pipped England in a nail-biting 27-26 Golden Point Semi-Final to make its first Rugby League World Cup Final. Samoa is the fifth team to qualify for a Final and the first country to do in 36 years.

There is a notable record that Josh Addo-Carr could break in the Rugby League World Cup Final, which will kick off in the early hours of Sunday morning for those in Australia. Valentine Holmes holds the record for the most tries in a World Cup tournament, having scored 12 tries in his debut 2017 World Cup campaign.

Josh Addo-Carr currently sits on 12 tries in this year’s tournament, meaning he only has to score one try to break Holmes’ record. Given that Addo-Carr has scored in all four of his World Cup appearances, there’s every chance he can make it happen. If he does, we’ll be left wondering – who let the Foxx out?