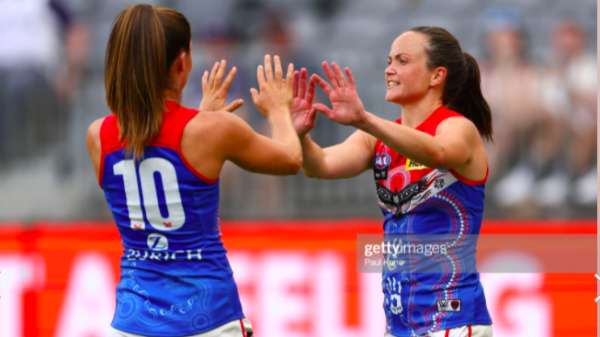 Fightbacks and thrillers kicked off Round 9 of the AFLW, before two massive blowouts reminded the world of how tough some sides are doing it in 2022.

Fightbacks and thrillers kicked off Round 9 of the AFLW, before two massive blowouts reminded the world of how tough some sides are doing it in 2022.

Round Nine of the 2022 AFLW Season kicked off in dramatic fashion, as the home and away season enters the final stretch. With four games on Saturday, and the top six closed to be sealed, it was time to lay it all on the line.

The starts of the competition did, with some teams showing plenty of fight to stop results slipping away, while others accelerated away from the competition, there was a little bit of everything on Saturday.

Saints outlast Cats for back to back wins

St Kilda's young and inexperienced midfield is starting to hit its straps, as it let the way for the win over Geelong in windy conditions.

The Cats were unable to kick straight, a problem which cost them a chance at a win, despite having more scoring shots than the Saints. The first quarter was played largely in the Cat's forward half, but they were unable to capitalise.

Kate Shierlaw put a turning point down, with a mark and goal in the dying seconds of the first quarter, to give the Saints the lead against the run of play.

Caitlin Grieser doubled the feat in the second quarter, while the Cats were held scoreless to put the Saints up by a significant gap in the context of the game.

The Cats came back hard in the third term, but Chloe Scheer and Claudia Gunjaca were unable to convert set shot opportunities. It left the Cats with it all to do in the final term, but it wasn't to be, as the Cats lost 18-9.

Geelong finished with nine behinds, while St Kilda managed eight scoring shots, but the accuracy was the difference.

Tilly Lucas-Rodd was the star of the day for the Saints, with 22 disposals, 12 clearances, 10 tackles and seven inside 50s in an all-round performance that set up the Saints. Cat Phillips was also a calming influence in defence, keeping the besieged Saints in a position to win the match.

Tigers hold on to trump Giants

The GWS Giants were slow out of the blocks at Giants Stadium, as Richmond Tigers piled on their biggest first-quarter score, and kicked five unanswered goals.

Courtney Wakefield and Maddie Shevlin showed their skills from the pocket to kick the first two, while Megan Kiely and Tessa Lavey each managed to hit the scoreboard in the first quarter as well. With Katie Brennan's goal, she extended her streak to 15 consecutive matches with a goal.

The game felt almost over at quarter time, with a 31 point margin at the first break, before the Giants started to fight back.

Emily Pease kicked the Giants' first to get them on the board, before Brid Stack made a rare forward appearance and tallied up a goal as well.

The Giants' fightback was stymied in the third term, as Christina Bernardi and Brennan each kicked a goal, while the Giants were again held scoreless. Monique Conti (26 disposals) led the way for the Tigers as they asserted their strength.

Cora Staunton had three final-quarter goals, and Rebecca Privitelli added another as the Giants made a fist of a comeback, bringing the game back to within eight points, but it wasn't enough.

The Giants will be frustrated by another slow start that cost them a win, because after quarter time, they kicked six goals to two for the rest of the match. But the first-quarter gap was too much to overcome.

Melbourne made a statement in its trip to Perth, as the Demons piled on an AFLW-record score, to win by an AFLW-record margin, against a depleted Dockers team.

Melbourne was at full strength, and ready to take advantage of the pristine conditions inside Optus Stadium. It showed, as the masterclass started with a Tayla Harris goal, and ended in a huge performance.

Star forward Daisy Pearce finished with five goals becoming the fourth player to do so, while the Demons finished with seven individual goalkickers.

The third term was the worst for the Dockers, as the Demons kicked seven goals, making it the highest-scoring quarter in AFLW history, as they sailed past their previous AFLW-record score, and then eventually the AFLW-record score. In the fourth quarter, the Demons became the first team to register 100 points in an AFLW match.

The 107-19 win is the largest winning margin in AFLW history as the Demons will feel good about their form heading into the final week of the home and away season, and with finals in the back of their minds.

The Western Bulldogs needed a win over the West Coast Eagles to keep pressure on the top six, and keep alive any hope of a finals finish. It was a slow start, with a scoreless opening ten minutes, before Richelle Cranston opened the scoring.

The floodgates appeared to be opening in the second quarter, as Bonnie Toogood and Brooke Lochland each found a goal as well, while the Bulldogs continued to keep the Eagles scoreless. Dana Hooker left the field in the second quarter with a shoulder injury, and played no further part in the match.

After it looked like the dam was breaking in the second term, the confirmation was in the third term, as the Bulldogs added three more goals. The only consolation for the Eagles was Hayley Bullas roving a contest and grabbing their only goal of the match.

The Bulldogs didn't relax in the fourth term, kicking four goals, including a bending effort from the pocket for Deanna Berry in her second match of her return from an ACL injury.

Lochland finished with three goals, and Toogood and Nell Morris-Dalton finished with two each to pile on the hurt. The Eagles gave up a then-AFLW record score last week, as the defence fell under siege again, leaving the Perth side to lick their wounds, and contemplate a likely wooden-spoon.