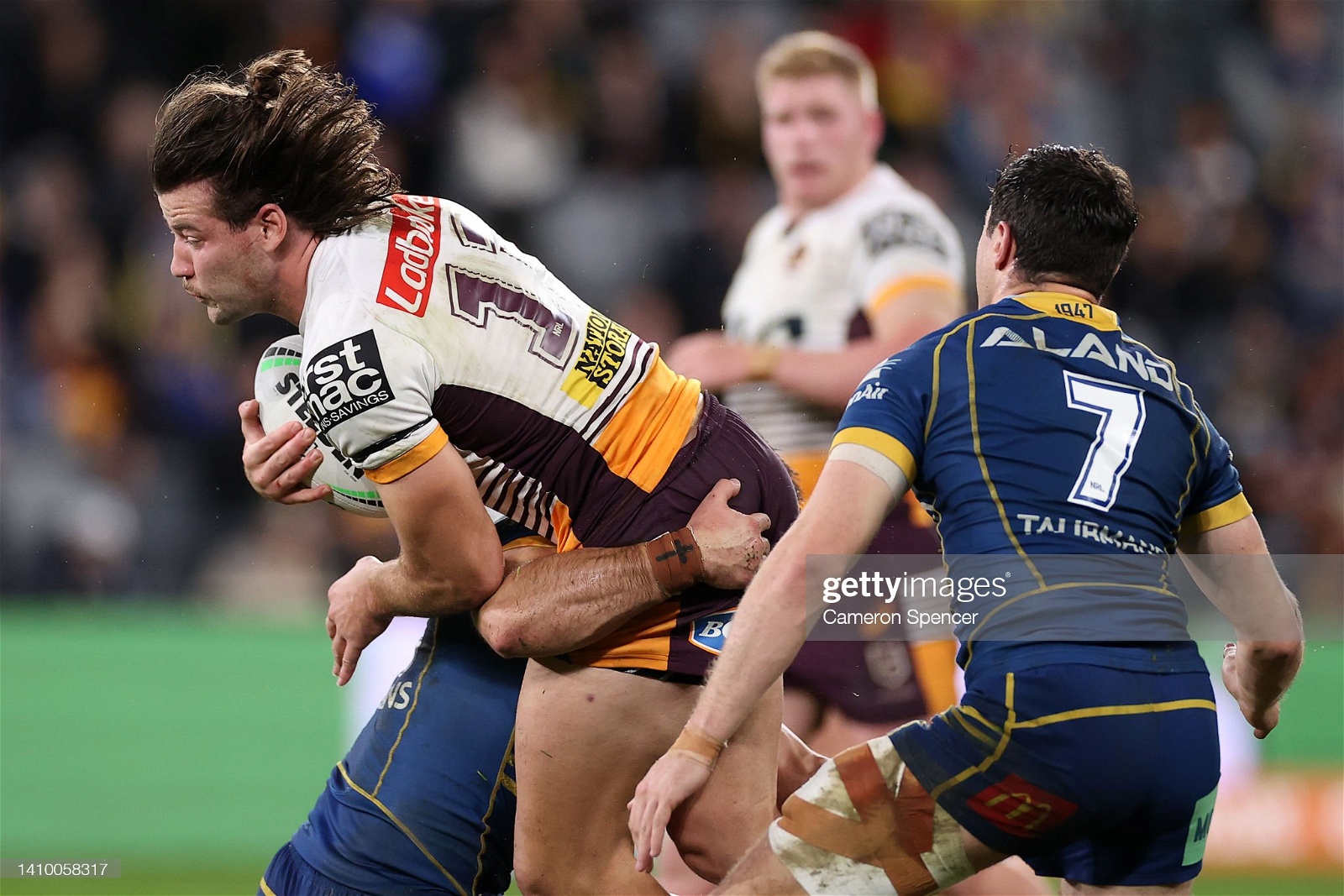 With round 19 in the books, Edge of the Crowd takes a look at the big stars from this week's games.

With round 19 in the books, Edge of the Crowd takes a look at the big stars from this week's games.

By  Jess Laven and Jessika Ross

A reliable entry into any debate of the best NRL fullback, Tedesco was at his best this round against the Knights. As captain and fullback, he led his team to another win in the fight for a finals place.

Setting up teammates and scoring on his own, the Knights were outmatched by the origin star. With 317 run metres and three line breaks to his name, there is no doubt that Tedesco was the best fullback this round.

The Broncos proved they are top four contenders in their 36-14 win over the Eels on Thursday. Corey Oates continued his stunning return to form, scoring yet another double.

Brenko Lee put in a kick and then kicked the rebounding ball again. Oates then came through on the wing and kicked the ball a third time before falling on it perfectly to score in the 10th minute.

Halfback Adam Reynold put in a pinpoint kick in the 41st minute, with Oates flying high over Bailey Simonsson to score his second try right in the left corner.

Oates finished the game with 135 running metres from 15 runs, 45 post-contact metres and three tackle breaks. He also impressed with his defensive efforts, with his tackles proving crucial in quashing the Eels’ try-scoring opportunities.

Weekly performances from Valentine Holmes is one of the reasons the Cowboys have been surprising contenders for the 2022 premiership. This round was no different.

While the game's dying minutes may have been tainted by refereeing controversy, Holmes was a big reason the Cowboys were in a place to make their final penalty goal.

With a try and 193 run metres, Holmes was one of the architects behind several of his team's tries. Additionally, his consistency with the boot provided plenty of points on its own, including the game-winning penalty goal.

While not finding the try line often himself, Timoko has put on a solid display of his talent in his first season as a regular feature in the NRL side.

Breaking tackles and setting up line breaks and tries, Timoko was an important piece in the Raider's win over the Warriors this round. He also ran for a total of 112 metres and made 11 tackles.

Despite a second-half surge from the Titans in the form of three tries, the Bulldogs secured a 36-26 win in front of almost 12,000 fans. Having found his feet with the Bulldogs after a slow start to his first season with the club, Josh Addo-Carr got the 7th hat trick of his career.

Matt Burton tricked the Titans’ defence with a dummy pass, resulting in a line break down the left side of the field. Josh Addo-Carr ran alongside him in support and scored his first try in just the 4th minute.

In the 23rd minute, Addo-Carr intercepted a dummy half Titans pass and ran the length of the field to score his second in the left corner. Racking up another 60-odd running metres, Addo-Carr secured his third try in the 45th minute after intercepting Titans halfback Toby Sexton’s pass.

What’s more, he got a try assist in the 64th minute, catching a pass from Matt Burton and then passing it straight back to send Burton in to score. Addo-Carr finished the game with an impressive 317 running metres and four tackle breaks.

In this round, Matt Burton showed off why he moved away from Penrith to a side where he could play the five-eighth role. He teamed up with Josh Addo-Carr to show signs of the team many expected the Bulldogs to be this year.

He scored two tries of his own, set up a third, and was a vital part of the buildup for many others. Additionally, his kicking provided many points on its own, going 5/6 in conversions and making an additional penalty goal.

One of the best signings of this season, Adam Reynolds, has proven to be exactly what the Broncos needed. Reynolds, an experienced playmaker, provided the veteran presence that the young Broncos stars needed.

This week, however, Reynolds' defensive abilities were what earnt him his place here. Making 28 tackles, with a 90.32% efficiency, Reynolds showed that he could play well on either side of the ball.

The Raiders came back from behind to claim a 26-14 victory over the Warriors. Joseph Tapine once again performed strongly during his time on the field. He finished with the most running metres in the match, with 189 metres from 18 runs. Naturally, this resulted in an impressive 77 post-contact metres.

His ability to surprise the opposition’s defence continues to be an asset for the Raiders. Tapine racked up three offloads, six tackle breaks this week and had 17 hits ups.

In the Bulldogs’ 36-26 win over the Titans, Jeremy Mashall-King proved that he’ll be missed when he leaves for the Dolphins at the end of the season.

He scored between the posts in the 18th minute after his cheeky dummy half run tricked the Titans’ defence. In the 30th minute, Mashall-King offloaded while in the middle of falling during a tackle, sending Matt Burton in to score.

Mashall-King made the most tackles of the match with a total of 42 and tricked the defence with five dummy half runs, and four dummy passes.

Payne Hass delivered a strong performance in the Broncos’ 36-14 win over the Eels.

Hass caught a surprise offload from Patrick Carrigan and took on the defence, breaking through flimsy tackle attempts to score in the 19th minute.

He finished the game with 96 post contact metres, two offloads and nine tackle breaks in an impressive attacking effort. His defence was equalling as strong, having made 29 tackles with an efficiency rate above 90%.

The Rabbitohs triumphed over the Storm 24-12 on Saturday night. Multiple Rabbitohs forwards put in strong performances, including Keaon Koloamatangi.

Koloamatangi slid over the line untouched less than two minutes after kick-off, thanks to a pass from halfback Lachlan Ilias. Koloamatangi returned the favour and helped the Rabbitohs score another 4-pointer in the second half. He caught the Storm off guard with a line break and passed mid-fall to Ilias to send him in for a try of his own.

In the Cowboys’ controversial 27-26 win over the Wests Tigers on Sunday, 19-year-old Jeremiah Nanai proved why he deserved his Origin call-up this year.

He levelled the scores with a crucial try in the 53rd minute after a Tom Dearden pass sent him into space, with the Tigers’ defence running in too soon. Nanai scored an equally if not even more important try less than 15 minutes later, breaking the 18-18 scoreline deadlock. Midway through the Tigers’ attacking set, Nanai picked up a loose ball and sprinted to score untouched between the posts.

Nanai finished the game with 205 running metres, the most of anyone in the match, two tackle breaks and 31 post-contact metres.

After a spectacular showing in Origin, winning the Wally Lewis medal on his debut series, Carrigan has also been sensational for the Broncos this year.

Setting up two tackles himself, Carrigan also provided the typical run metres and tackles you expect to see from a star at the lock position.

He finished with 139 run metres and made 31 tackles.