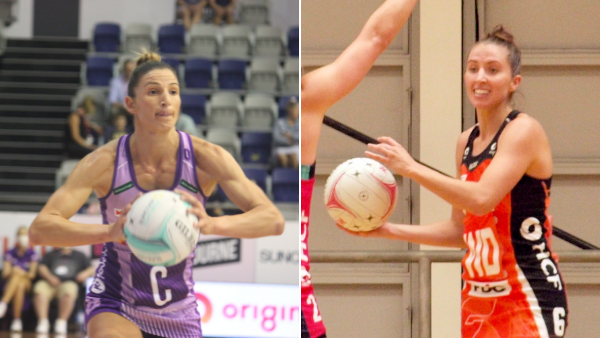 The Australian Diamonds squad has been named for the Commonwealth Games, but have the selectors made a mistake in only picking 18 players?

The Australian Diamonds squad has been named for the Commonwealth Games, but have the selectors made a mistake in only picking 18 players?

The Australian Diamonds squad has been named for the Commonwealth Games, but the selectors may have missed a trick in selecting an 18-player squad.

As Diamonds head coach Stacey Marinkovich revealed as she announced the squad, the selectors could have chosen up to 22 players for their initial squad. The selectors will have to cut down the squad from 18 players down to 12 for Commonwealth Games, with the possibility of a couple of other players travelling as injury replacements.

The Diamonds are well placed going into the Commonwealth Games, as defending silver medalists, and the most recent champions of international netball after winning January's Netball Quad Series.

The Diamonds were undefeated in January against their expected medal rivals, the English Roses and the New Zealand Silver Ferns, as well as the South African Proteas.

That squad of 15 players has been retained in full for the Commonwealth Games squad, with three additions.

Kiera Austin has been named to return to the Diamonds, for the first time since the Constellation Cup against New Zealand in March 2021. Austin missed the Quad Series as she recovered from an ACL injury suffered during the 2021 Super Netball season.

Austin's return to play has been quick, and over the last fortnight of Super Netball, she has found her form again. She has been starring for the Melbourne Vixens, including a standout performance against her old club, the Giants.

Amy Parmenter, of the Giants, has been named to the Diamonds squad for the first time. Parmenter was a standout performer in last year's Super Netball season, and has been rewarded for starting this year with similar form before being struck down with COVID-19.

The bolter of the squad, and the shock addition is that of Donnell Wallam. Wallam, who a month ago was not a contracted player with any Super Netball side has been a revelation for the Queensland Firebirds.

Her selection to the Diamonds is the next step in a meteoric rise from trial training partner to superstardom. After showing her credentials in state netball in Western Australia, and for the Leeds Rhinos in the Super Netball League in the United Kingdom, Wallam's talent has been confirmed with the way she has handled the defences at Super Netball level.

Her combination with incumbent Diamonds shooter, Gretel Bueta, with the Queensland Firebirds no doubt helps too.

The preliminary Australian Diamonds Squad for the 2022 Commonwealth Games:

There were plenty of players who would have fancied themselves as a chance to make the Diamonds squad this season, but a few in particular have a right to feel hard done by selectors.

Maddy Proud, and Kim Ravaillion are at the top of that list. The two midcourters are in hot form at Super Netball level, and have been for an extended period.

The Firebirds have dominated sides, and it has been on the back of Ravaillion's speed, calm and precision through the midcourt, and her presence in every minute of every match so far.

Ravaillion has played 60 matches for the Diamonds, most recently in 2018, and is one of just two active players who has won a Commonwealth Games gold medal for the Diamonds.

The other active Diamond with a Commonwealth Games gold medal is Paige Hadley, who has been selected. Her Super Netball midcourt partner, Maddy Proud, is right there with Ravaillion.

Proud was one of the form midcourters of last year's Super Netball season, playing a key role for the eventual premiers, the NSW Swifts.

Proud has started in the same form this season, and despite the Swifts struggling without Sam Wallace, Proud and Hadley have kept the Swifts afloat.

For the 28 year old Ravaillion and Proud, the omission from the large squad suggests that their hopes of a return to the Diamonds' squad is a long shot. Ravaillion is unlikely to add to her 60 caps, while Proud is unlikely to get a Diamonds debut at all.

Other Super Netball stars like Kelsey Browne, Verity Simmons and April Brandley appear also to be on the outer, as the talent crush for the Diamonds squad bites.

FEVER FINISH OFF SWIFTS AFTER FIRST HALF GRIND

The Diamonds selectors have named a squad of 18 players, less than the possible 22. The first benefit of the smaller list is that there are less names to cut when it gets to the 12-player squad for the Commonwealth Games.

The second benefit is... well, there might not be a second.

There are a number of drawbacks from naming just 18 players, and leaving out some of those big names.

The first is that the selectors have left the door hanging open if there are injuries to the squad, rather than indicating to players who are next in line.

If, unfortunately, a Diamonds squad player becomes injured and is out for the Commonwealth Games, speculation is certain to be rampant as to who will replace that player, rather than it being clear who is next in line.

The second, and more significant, is about the example set within Super Netball. Diamonds selection should be a reward for elite form, and playing netball at the standard required for the international game.

By selecting only 18 players, the Diamonds selectors have deprived up to four players of that recognition for their form. Currently in Super Netball, there would be legitimate cases for three or four midcourters, one or two shooters, and two or three defenders to all be showing the form needed to play at international level.

Instead, all of those players are left in the cold.

In the specific case of Ravaillion and Proud, combinations at Super Netball are not maximised, and the squad doesn't get the benefits of calm heads under pressure, in the most difficult of situations.

A lot of the time, when selection debates come up, the question is about the player who should be excluded from the squad for the popular inclusion.

This debate is different, because there is no question about that. With four more spots in the squad, no player has to be cut down and removed. No inclusion is illegitimate and has to be at the expense of another.

That is why the Diamonds selectors have missed a trick. They haven't given themselves, and every player, the maximum opportunity possible.

Given that Stacey Marinkovich has indicated that the squad may be tinkered with, it begs the question why the tinkering hasn't been done already, and players rewarded for form.

What was the point of picking a preliminary squad after five rounds of Super Netball if it is subject to tinkering, and it isn't the largest possible pool, given how much netball is to play?

There is no staging camp or training camp for the Diamonds between now and the cut down of the squad to 12. There is no offseason gap for the players to know to maintain their fitness, or to prepare together.

There is no reason why the squad needed to be named with four empty slots this early in the season, and it shows that the Diamonds selectors have missed a trick.

But what they haven't given the players, and themselves, is a much bigger cost.