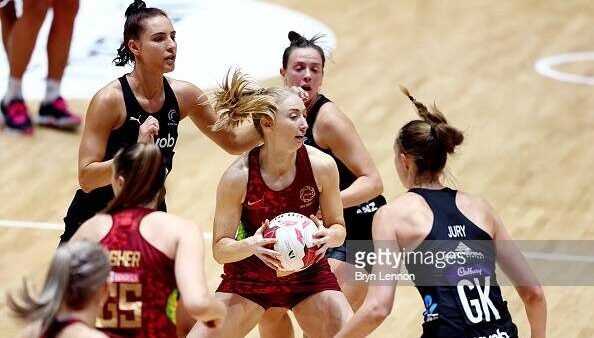 Roses continue to be the thorn in the Silver Ferns’ side

The Silver Ferns lost to the Roses, 49 - 46, cementing the Roses spot in the Quad Series Final. Can England go all the way?

Roses continue to be the thorn in the Silver Ferns’ side

The Silver Ferns lost to the Roses, 49 - 46, cementing the Roses spot in the Quad Series Final. Can England go all the way?

Pride was on the line for the Silver Ferns in their second game of the Quad Series. After their 39 - 53 loss to the Australian Diamonds, the Ferns needed this win to have a chance to be in the final.

Unlike other Quad Series teams, England and New Zealand have met in the past six months. In September 2021 the pair battled it out in Christchurch for the Taini Jamison trophy. The Roses walked away victorious, winning two of the three games.

Both teams fought hard, with the biggest difference between final scores being ten points. It was experience that gave the Roses a leg up, especially given the inexperience in the Silver Ferns goal circle. Although there are some experienced players in the likes of Shannon Saunders (84 caps) and Gina Crampton (50 caps), the current squad has not played many international games as a group.

The Roses, on the other hand, already have established connections within the team. Even with the absence of Jo Harten, they seemed to have no problems against the Proteas yesterday. George Fisher, Eleanor Cardwell, and Helen Housby had a combined 95% shooting success rate. The Silver Ferns, however, only sunk 39 of 49 attempts, giving them an average of 80% against the Diamonds.

As Dame Noeline Taurua said after the Diamonds clash, her team “definitely did improve” from yesterday’s “hiding,” but it simply wasn’t enough. On Wednesday, they’ll go on to play the South Africa Proteas, who are also winless in the series. The Silver Ferns are the favourites, and will have a chance to prove themselves ahead of the Commonwealth Games.

After her performance yesterday, George Fisher was given the start at goal-shooter, swapping in for Cardwell. The game started out in England’s favour with a quick turnover, although the Silver Ferns made the Roses work for that first point.

Having a good first quarter is key for New Zealand, and with a six-point lead after the first 15 minutes, things were looking promising. The Silver Ferns had clearly taken yesterday’s loss in their stride, starting out strong and meshing well as a team.

Only one change from both teams in the second quarter, with Usoro-Brown moving into the goal keeper position. At one point, New Zealand had a 10 point lead, but the Roses were able to capitalise off some turnovers, closing the gap.

After gaining some momentum, the team managed to get within three goals of New Zealand. With four minutes left, Jade Clarke came in as centre, making an early impact by forcing a turnover.

We saw Housby sink some long shots, a skill likely honed by the Suncorp Super Netball’s super shot. In the 2021 season, her Super Shot success rate was 63 per cent, higher than Steph Wood and Jo Harten. Her overall success rate from the game was 96 per cent, missing only one shot.

By halftime, the score was 25 apiece, with the Roses winning the quarter 15 to nine. No changes once again for the third quarter. After some blood, Winders joined the game as centre, replacing Kersten.

Another close quarter, with 14 for the Roses and 11 for the Ferns, making the score 39 - 36. The Ferns were still looking good, but the damage had already been done.

Winders stayed on for the fourth quarter, with the lineup unchanged. With 11 minutes to go, New Zealand made some substitutions, swapping Phoenix Karaka into goal defence and Grace Nweke into goal shooter. The score was 42 - 36 and the crowd was getting right behind the home team.

The Roses defence was giving the Silver Ferns a hard time getting into the circle during a critical ten minutes. Nweke was making moves, her height giving them a holding circle, a change from the earlier quarters.

Both teams scored ten points in the final quarter, but even with the six extra attempts, the Silver Ferns couldn't come back. Seven minutes left and the commentators were calling it, with a five-point lead to the Roses. Without turnovers, New Zealand would be out of the final, leaving only third place for the taking.

Sulu Fitzpatrick came in at goal keeper into the final five minutes, with a three-point difference. Her presence was noticed immediately, holding up the Roses in the goal circle. It wasn’t meant to be though, with the Roses maintaining their lead and walking away with another win.

Captain Serena Guthrie was awarded Player of the Match, recording the most intercepts of the match.

Despite the loss, Taurua seemed positive. After yesterday’s game, she said, “The only way that you’re ever gonna learn is getting out there.” That seemed true for newer players such as Metuarau, who seemed more confident on the court today. The Quad Series is only one step in the journey to Commonwealth Games victory, something both teams are aiming for this year.

The Silver Ferns will be looking for their first win of the series against the Proteas on Wednesday, at 4.30 AM AEDT.

England will also play the Australian Diamonds for the first time since 2019 in Wednesday’s match at 6.30 AM AEDT.