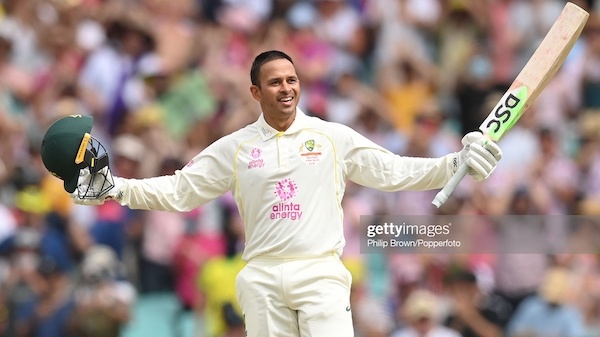 Rising from the Ashes: Khawaja comeback highlights Day 2 in Sydney

It was Khawaja's day at the SCG, on his Ashes comeback he scored a sensational century, the highlight on Day 2 of the Sydney test.

Rising from the Ashes: Khawaja comeback highlights Day 2 in Sydney

It was Khawaja's day at the SCG, on his Ashes comeback he scored a sensational century, the highlight on Day 2 of the Sydney test.

In his test comeback, Usman Khawaja scored a century and was the highlight of the afternoon on another rain-affected Ashes day at the SCG.

Dropped by Joe Root on 28, Khawaja said post-match that he really is "living the Australian dream," as he scored another Ashes century for Australia.

A flick off the pads through the leg side allowed Khawaja and his captain Pat Cummins to run. While it didn't reach the boundary, an easy third gave Khawaja all the time he needed to celebrate the milestone.

The LeBron celebration was a spur of the moment reaction, but one that he uses all the time when playing pool or table tennis with his teammates back at the hotel.

"I was just excited, I was so pumped. I didn't think I was going to get a 100, they don't come around very often, a lot of hard work goes into them.

"I got taken away by the moment, really."

Khawaja admitted to being nervous on return, more so because of the lack of cricket he has played while being on the Ashes tour with the Australian squad.

"So I was out of the rhythm of it all. When you don't go into the middle for a while, it does feel a little bit foreign.

"When I went out there yesterday, it was a little bit foreign-feeling, but as I said it was beautiful, it was a lot of fun going out there, having a lot of support. My former home ground here, but people still treat me like a local boy."

The roar of the crowd was as loud as ever, for just over 20,000 people sitting in the stands. It's a rare response for a New South Welshman turned Queenslander returning to his home state, and even rarer for a batter joked Khawaja.

"It was probably the most touching, humbling, amazing feeling out there today, getting that hundred and the roar that went up.

"They were chanting 'Uzzie' as I was coming off the field - the stuff you dream of, never expect it to happen. It usually happens to bowlers, batters usually don't get that kind of treatment."

Just like Day One, Day Two again had showers of rain that pulled the players from the field at various times.

A start-stop section of play through the second hour from 11 am until noon, was navigated with class by Khawaja and Steve Smith.

The vice-captain brought up a half-century, but fell a little while later, caught behind by Jos Buttler off the bowling of Broad.

Cameron Green got to five and then got out, caught by Zak Crawley off the bowling of Broad. Alex Carey didn't last much longer, a positive start only hit 13 before the keeper was sent back to the dugout by Root, caught Jonny Bairstow.

Stokes went down with a side strain in the fourth over of his spell, grimacing in pain as he left the field. He returned to the outer later in the day, but did not take the ball again.

For England, it was Stuart Broad's day. The English bowler returned to the line-up for the Sydney test, just his second match for the series after he missed Brisbane and was dropped in Melbourne.

Post-match, Broad spoke to media and was pleased to help his side out with the ball.

"I actually felt like I bowled really well in the nets two days out and although I've not played much cricket in the past year, I actually felt in a pretty good rhythm straight away in this game. So, pleased to have had an impact."

While he has had limited match time this series, Broad was positive when reflecting on his tour so far and the side's approach, given the Ashes have already been won by Australia.

"I think when you miss out in test matches when you don't play a huge amount over a passage, it actually makes you realise how special it is to play," Broad said.

Sure, England could have bowled Australia out for less than the 416 it declared for, but he was pleased with the heart shown by his bowling unit.

"We showed heart and we showed character, which is what you need in test cricket. I think all the seamers charged in when Stokesy went down and we can hold our heads high with the attitude and application we showed because that wasn't easy out there."

With a Nathan Lyon six, hit into the stands, Australia declared on 8/416, sending England in for the final 30 minutes of play on Day Two.

Broad finished with five wickets and will hold this

"It's quite a nice five-for ball I've got because it's the only five-for bowl I've got hit for six with the last ball I bowled with it," he said.

"It then had to get sanitised because it went into the crowd.

"So I've got this soaking wet ball back for a five-for, so that'll be a nice one to keep. The hand sanitiser, SCG, five-for ball, shows the modern times we're living in."

Starc thought he had the first breakthrough, caught at first slip by Warner, but the delivery was ruled a no-ball and Crawley remained at the crease.

Despite an aggressive start with the ball by Cummins and Starc, the English openers survived until stumps.

England will resume on Day Three at 0/13, with Crawley and Hameed in the middle. Play will begin at 10 am AEDT on Jane McGrath Day at the SCG.