After just three wins last season, the Tigers are ready to claw their way to their first finals series 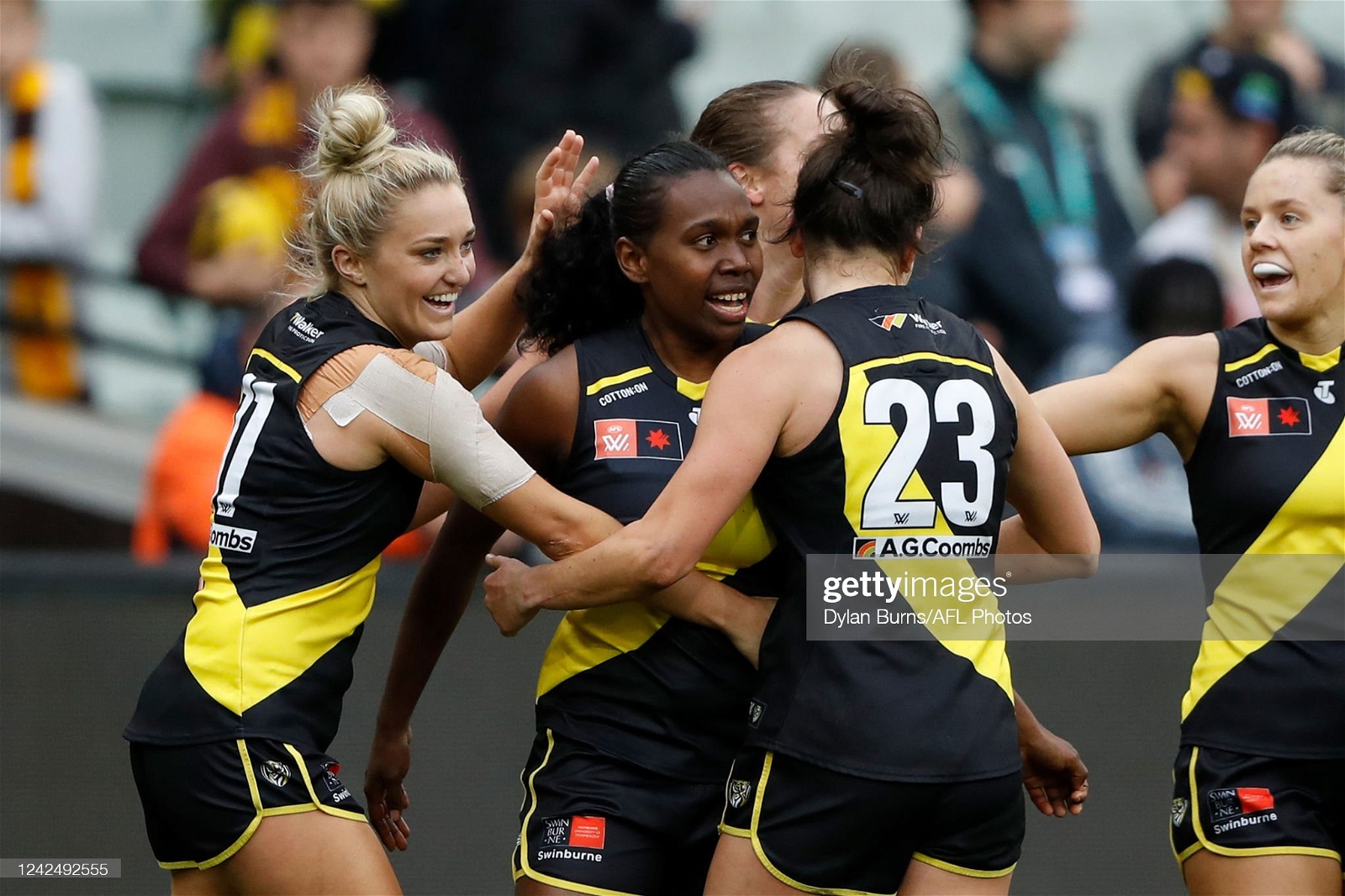 MELBOURNE, AUSTRALIA - AUGUST 14: Stephanie Williams of the Tigers celebrates a goal during the 2022 AFLW practice match between the Richmond Tigers and the Hawthorn Hawks at the Melbourne Cricket Ground on August 14, 2022 in Melbourne, Australia. (Photo by Dylan Burns/AFL Photos via Getty Images)

After finishing 11th on the ladder last season, the Tigers are ready to make a statement to the rest of the competition and to make finals in their fourth season in the AFLW.

The Tigers had a strong offseason, including the pick-ups of Steph Williams (Geelong), Grace Egan (Carlton) and WNBL player Saraid Taylor.

Richmond's 8.4 (52) dominant 44-point pre-season win over Hawthorn 1.2 (8) has given a glimpse of what the Tigers are capable of this season and how much they have improved.

How did they do last season?

Richmond started their season terrifically last year with a dominant 38-point win over the Saints in Round 1, although it would take another six weeks for the Tigers to claim their second win.

Richmond's midfield and their defence were solid, although their goal efficiency would cost the Tigers wins throughout the season.

After a terrific start to the season on the scoreboard last season, the Tigers started to drop off and struggle to covert multiple goals onto the scoreboard.

Since entering the competition in 2020, the Tigers have not played finals and have struggled to convert on the scoreboard. This is a crucial area where the Tigers need to improve if they want to win more games and play finals for the first time.

Richmond were very busy throughout their trade period and arguably had the best results. The Tigers' list is stacked with gun players signing and will see the Tigers as a threat.

Monique Conti will be so engaging for everyone to watch this season. Conti won her third consecutive best and fairest at Richmond, and at only 22, she looks to become even better starting this season.

Richmond has struggled in previous seasons to convert goals onto the scoreboard. However, a dominant pre-season win over Hawthorn has shown why the Tigers should not be taken lightly this season.

Richmond's recruits looked to impress as Graham was strong holding the backline; Williams, too, was impressive, kicking a goal in the final quarter.

Will Richmond be able to perform due to their injury list?

Cordner's ACL injury, which will sit her out for the whole AFLW season, is a big out, especially with how dominant she is and a key player leading the backline.

Alongside her is winger Hannah Burchell who also was confirmed earlier this year to have a ruptured ACL in her left knee.

Recruits Graham and draftee Cox have been brought into the team to add strength to their backline; however, will inexperience be a factor for them?

Jemima Woods has been given a second chance at Richmond after the Western Bulldogs gave her the flick; this will be what will start her outbreak of a season.

She has been given a second chance to play the sport she loves, and with the backing of the Tigers, she could be an amazing player at still only 19.

If Sheerin continues her astonishing pre-season performance against the Hawks, she will be a gun for the Tigers as well as their rising star.

Richmond has not made the finals since joining the competition only four seasons ago. However, this will be their breakout as the Tigers look strong.

The Tigers have a strong list that they have gathered during the off-season and their current players, who are only getting stronger.

The Tigers have many experienced coaches who will help the players perform to their full potential.