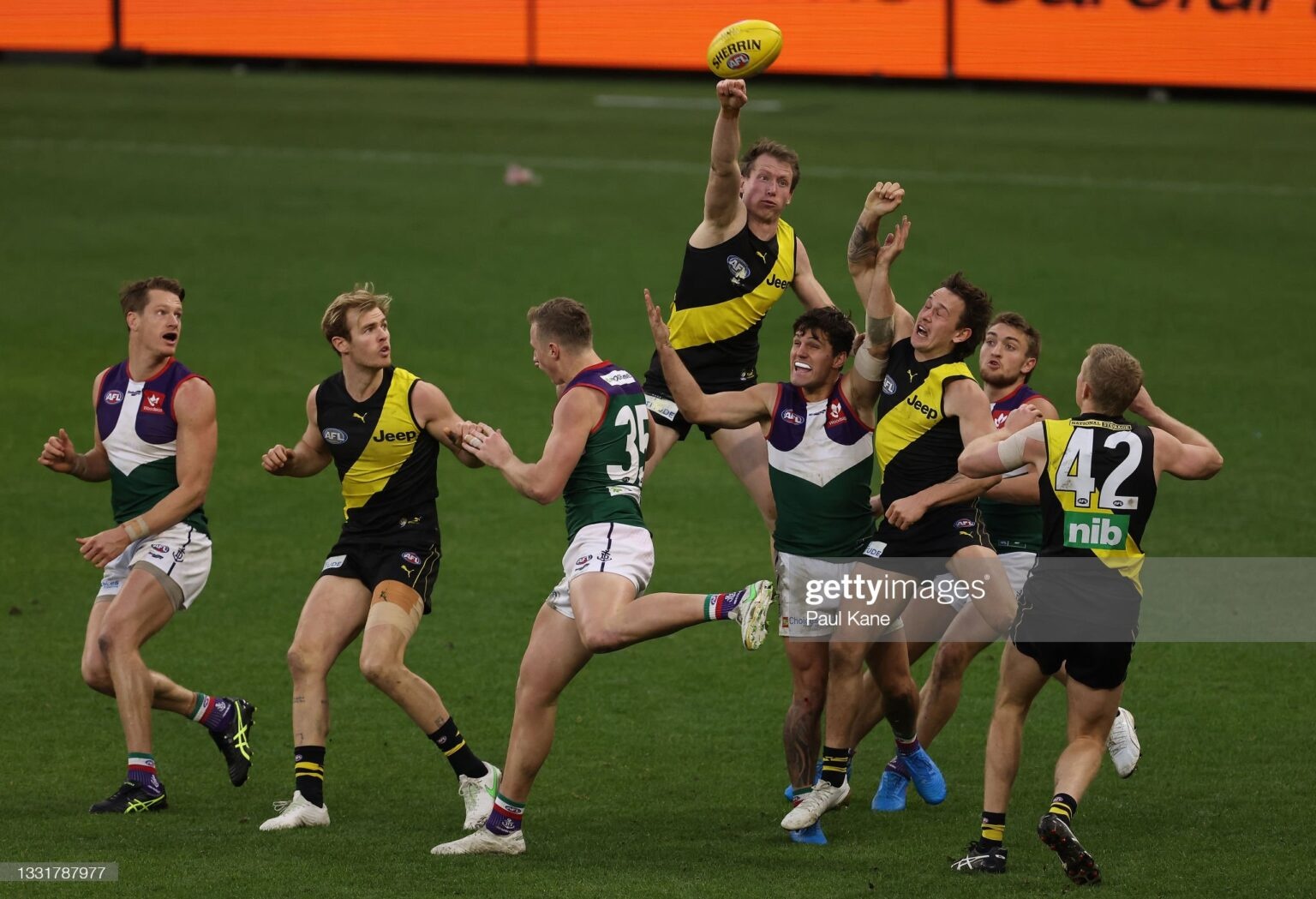 After three premierships in four years the Tigers seem to be on the way down, find out why with our Richmond AFL Season Preview.

After three premierships in four years the Tigers seem to be on the way down, find out why with our Richmond AFL Season Preview.

The Tigers will attempt to recapture their greatness this season after a number of injuries cost them to miss the finals for the first time since 2016 last year, but this time newly appointed co-captains Dylan Grimes and Toby Nankervis will be leading the charge.

Richmond experienced a fall from grace in 2021, missing the top eight completely the season after they secure their third premiership in four years and cemented their legacy in the record books.

They began honestly, with a list fairly similar to the one that had taken them all the way previously, and maintained an even win-loss record after the first ten rounds. But their campaign was soon derailed after inconsistent form from some key players and a number of injuries, including to Dustin Martin, made it hard to find consistent chemistry.

But heading into the upcoming season, the Tigers achieved a solid win over their old rival Geelong in their first preseason match, as Martin and Ivan Soldo played convincingly after long layoffs. Tom Lynch also looked more like his old self, while some young up-and-comers showed what they can do.

The big question on every footy fan’s mind is can the Tigers still play with the explosiveness we have all seen before and compete with the best of the best? Or are they experiencing the drop-off that all great dynasties eventually do?

Age-wise, the Tigers still seem to be in their premiership window, so they will have to find it in themselves to play hard and win the games they should win week in, week out in order to stay in the finals picture.

The defensive end of the ground was a problem last year and has taken a hit after both premiership backmen Bachar Houli and David Astbury retired. Those holes will have to be filled by some of their younger pickups and with leader Dylan Grimes playing the role as the general.

Lack of height was a problem to 2021’s injury-ridden side, but Ivan Soldo’s return will now aid Nankervis in the ruck, allowing each other to swap and further their impact around the ground.

Tom Lynch played like his 2019 form in his preseason game, and if he can maintain that level he can ease the burden of the solo mission that Jack Riewoldt felt up forward last year.

Ultimately, the team needs to remain healthy and on the field, and the stars have to play as they’re expected to, and the Tigers will make an impact.

The Tigers ended with a disappointing result last year, going from the reigning premiers to not even making the finals. Things began slowly, but they were holding onto the eighth position after round 12, and most pundits thought they would still be able to turn it on when they needed to.

But after a nail-biting loss to West Coast in round 13, it was all downhill from there, as the wear and tear of the previous years took its toll, as stars’ form sloped and injuries became more frequent.

HAWTHORN AFL SEASON PREVIEW- THE DAWN OF A NEW ERA

Richmond’s biggest strengths are that they have the star power and the experience to know that they have what it takes to go all the way again, and their fully healthy list easily compares to the best of the best in the league.

Veterans Dustin Martin, Jack Riewoldt and Tom Lynch can all win a game off their own boot when in top form, and one positive to all the injuries they experienced last year was that players such as Jack Graham, Liam Baker and Shai Bolton were all able take their games to the next level in other players’ absence.

The Tiger’s list goes surprisingly deep when healthy, and they have plenty of options, they will just have to find who fits best where.

Obviously, health is a major question for Richmond, with some of their premiership players having a lot of mileage on their boots after the last few years. But the bigger question is can their midfield keep up with the likes of the Demons and the Bulldogs who possess stars all throughout their own? Especially when Dion Prestia seems to always find himself on the sidelines for part of the season.

The Tigers also lack any true star small forwards who can help Lynch and Riewoldt add to the scoreboard when needed.

Hugo Ralphsmith hasn’t had much opportunity at the senior level just yet, playing only six games last year, but after a big preseason, he is looking convincing and may be able to fill Richmond’s role on the back flank after Bachar Houli’s retirement.

The 20-year-old displayed his clean skills and decision-making in the preseason game against the Cats and will be looking to solidify his spot in the team come the regular season.

When healthy and clicking, Richmond are a very dangerous outfit that no team would want to face, especially in the finals. With a lot of players returning and added depth to their list, the Tigers are likely to make the eight if they can recapture their consistency and hunger from years past.

If the mileage on their stars can hold off for a bit longer, the dynasty may not be over just yet.