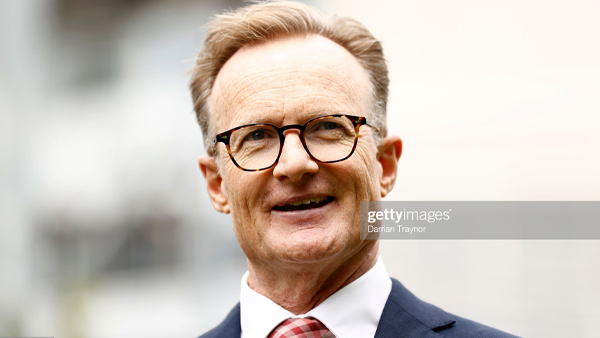 Dr Lachlan Henderson has been named the new Chair of Cricket Australia, looking to implement an engaging communication structure with all state bodies, as well a focus on the game's growth nation-wide.

Dr Lachlan Henderson has been named the new Chair of Cricket Australia, looking to implement an engaging communication structure with all state bodies, as well a focus on the game's growth nation-wide.

There are plenty of items on new Cricket Australia (CA) Chair Dr Lachlan Henderson's agenda he's looking to complete within the first few months of his tenure, most notably re-engaging with stakeholders and revitalising the sport's national competitions, none more pressing than the Big Bash League (BBL).

Dr Henderson is the third CA Chair in five months as he replaces interim Chair Richard Freudenstein, who had taken over the position from Earl Eddings who resigned in October. His experience in professional cricket organisations - while also having a background in healthcare - such as Chair of the WACA saw the appointment made by the national body on Thursday.

A member of the Board of Directors at CA since 2018, Dr Henderson has outlined his plans and priorities while addressing the media on the day of his appointment, stressing that communication will be key in wanting to deliver an improved product to cricket fans.

"I feel reasonably well-placed [for this role], I've been on both sides of cricket governance if you like - I was a state director at the WACA for four years, including a short period as Chair, the cricket board of Australia for the last three years," he told media on Thursday.

"My communication style will be to be open, transparent, hopefully consistent. I work in healthcare, we've negotiated a pandemic the last two years that's required a fair amount of resilience so, within the bounds of the confidentiality of boards, I hope there's a really open and transparent way forward."

An important point Dr Henderson hopes his involvement in this new position allows for is to be able to re-engage with the state and territory cricket organisations around the country, adding that talking to them, plus the players themselves is a good first step in improving the state of affairs.

"My role is to really re-engage with the state and territory Chairs, they're our members, what's important to them is what's important to Cricket Australia. It has been frustrating not to be able to meet in person so I intend to do that in the weeks ahead and we'll have some meetings both as a group and also one-on-one," he maintained.

"I think cricket Boards govern the game, it's important. None of us, myself included, were good enough players to play at the level of the players we talk to but I do think we need to re-engage with our players.

"That's been incredibly difficult, they've been mostly operating out of bio-secure bubbles... but as the new Chair of the Board, I'd like to think we'd re-engage with our cricketers, both males and females and also my role is to also talk to cricketers at all levels, from grassroots right through to the elite players."

The incoming CA Chair confirmed a new cricket strategy would be assessed this year, addressing concerns about the growth and development of the game, including a review of all competitions, but most importantly, the BBL.

"The first step in the Big Bash renewal is the strategy, the actual structure of the Big Bash and any changes like that are not on our agenda at the moment," he said.

"There'll be a consideration around the length of the season, also the duration of the season. I think they'll all be important considerations as we look at the Big Bash and we'll consult widely with those involved in the product; our states, our players, our partners, our broadcast partners, and we'll work out what's the best way forward.

"We'll look at what's the best for cricket at the moment. I think the Big Bash has been a great product... it's a really important product... for our states and their financial capacity as well and obviously, for our players, we'll be engaging with them as well.

"It is worth pointing out that in terms of television audiences, the men's Big Bash is the highest-rating audience per game in sport across the country and the women's Big Bash is number four so it's not about a complete overhaul, we have a great product but we do need to renew and refresh the BBL."

Also asked whether he wants cricket on the calendar and in the spotlight for the entire 12 months of the year, Dr Henderson said there was a need to be mindful of all forms of the game, but that dominating not just the summer months would be a consideration.

"I think we like all forms of cricket so clearly there's a real need [to focus on red ball], and you've seen how much the Ashes summer really re-invigorated cricket across the country this year," he said.

"Red ball cricket is a priority for all those who govern the game but we're very mindful of the other products, of the T20 competition and 50-overs so I'd like to think they can co-exist and all can grow and thrive.

"I think cricket's keen to take over the whole 12 months, not just the shoulder months but it is an incredibly tricky task when we have international programs as well.

"We are somewhat limited by the availability of touring teams - we have a Future Tours program to develop and implement coming up and that'll be a key consideration for us, not just dominating the traditional summer months when people are on holidays and free to watch a lot of cricket but also the months around the shoulder of the season."