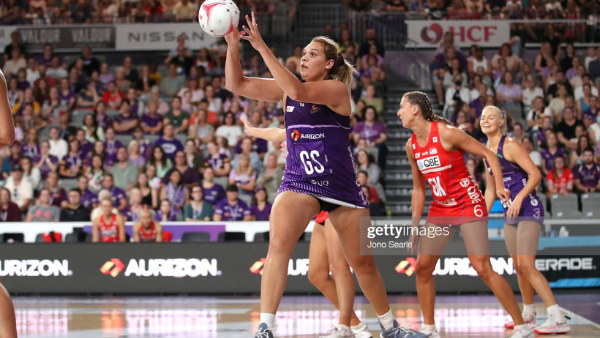 Queensland Firebirds bounce back with win over NSW Swifts

The Queensland Firebirds have bounced back after a disappointing game last week with a stunning 13 point victory over the struggling NSW Swifts (73-60).

Queensland Firebirds bounce back with win over NSW Swifts

The Queensland Firebirds have bounced back after a disappointing game last week with a stunning 13 point victory over the struggling NSW Swifts (73-60).

The Queensland Firebirds have bounced back after a disappointing game last week with a stunning 13 point victory over the struggling New South Wales Swifts, 73-60.

It was a scrappy opening quarter from both sides, neither really settling into the match with lots of turnovers from both sides. It was the Firebirds who took the lead into the first break by one.

Queensland Firebirds coach Megan Anderson was happy with the way her side were able to settle down towards the end of the first quarter.

"I think in that first quarter it was both ways. So while we were turning the ball over they were as well or we were making them turn it over," Anderson said post match.

"I think in the timeout I just said look, it's been scrappy both ways like let's just consolidate now and go away with it and concentrate on us, because it didn't matter what they were doing, you know, as long as we do what we want to do then we're good and from that point. I think we really settled and just finished the game beautifully."

It was a real team game played by the Firebirds, with the side complementing each other, which was something that really impressed Anderson.

"I think pre-match I just said you got to do yourself, you got to do you, everyone's got to be accountable for their own job but then we have to do it for each other and I think that was key for us tonight.

"Everybody just contributing in their own way but making sure that it was enhancing the player beside them.

"Ruby (Bakewell-Doren) got player of the match, but you know, I was standing there going how did Gretel (Bueta) not get it or how did Rav (Kim Ravaillion) not get it, Donnell (Wallam) was unreal as well.

"When we're on song and we're all playing our own game that I think we're pretty hard to stop but it takes a lot of effort. So the players just have to be aware that it's going to take that much effort, every single game and that's the level that we need to play at each game now."

Ruby Bakewell-Doran was outstanding for the Firebirds, finishing the match with six deflections and four intercepts. Anderson was impressed with how the young gun has cemented herself into the Firebirds starting line up.

"Rubes has had all the pathway experience and she's been waiting in the wings for a year or so and she got a bit of a taste last year and I saw how good she was.

"She's just brought such a competitive vibe to our environment, you see how fast and fit she is on the court but in training she's so competitive, she just keeps everybody on their toes. So she's really lifted that environment at our training sessions which benefits everybody."

For Swifts coach Briony Akle she was disappointed with the Swifts performance and the amount of turnovers that her side produced.

"Very disappointed and I think they are too," Akle said post match.

"We don't train like that during the week and I think we had 19 turnovers at half-time, it's the simple things that we're not doing well.

"Yes, the Firebirds were good, but we need to be better. I thought we had a chance when we were down by seven, I thought we were in chance of striking distance of winning that, so just disappointed."

Although the Swifts still have several premiership players in their side, they lack that confidence out of court with the few wins they've had this season.

"I think they're lacking some confidence and obviously you forget how to win sometimes even though you've had the wins last year. I think we just need that one win to get back on track, so it will come."

The Swifts are still yet to work out the best formula for their goal circle without Sam Wallace, but Akle said it's something that will come with a little more time.

"That's the golden question, isn't it! I think combinations take time, and we've had Sam (Wallace) in our team for five years and these two new shooters have been for seven games.

"So it will take time and they do some great stuff out there, but it's a full team effort. You know, we got to create the opportunities, get the ball back."

The Queensland Firebirds will head to Melbourne to take on the Vixens on Saturday evening while the Swifts will take on the Giants in the New South Wales Derby on Sunday.