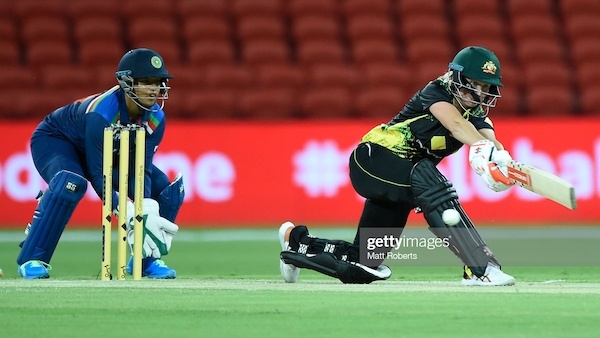 After a nasty hit in the nets, Australian batter Beth Mooney will undergo jaw surgery, ruling her out of the start of the Women's Ashes series.

After a nasty hit in the nets, Australian batter Beth Mooney will undergo jaw surgery, ruling her out of the start of the Women's Ashes series.

After a nasty hit from a "rogue" ball in the nets, Australian batter Beth Mooney will undergo surgery to fix a fractured jaw, ruling her out of the start of the Women's Ashes series.

Mooney might have good pain tolerance, but the WBBL|07 leading run scorer will miss some cricket in the coming days - the Australian camp sweating on a recovery timeline to be discussed post-surgery today.

Speaking to media on Tuesday morning ahead of the two T20 practice matches at Karen Rolton Oval in Adelaide, Australian coach Matthew Mott said he was the culprit in the nets, although Mooney was apologising to him after the incident.

"Unfortunately, I played a pivotal role in that," he said.

"I was throwing balls to Beth, she was batting incredibly well in the nets there and, as can happen, just a rogue ball came up and put her in a pretty tough position and she tried to get away, unfortunately just copped the side of the chin.

"It's very disappointing for her, poor timing. I think she'd had a good break out of the game and she was hitting the ball extremely well. So unfortunately, just one of those rogue incidents that can happen when you're throwing cricket balls."

With the advances in these surgeries, Australia remains confident she could be seen later in the series.

"The good news is that our doctors are pretty positive that the way the jaw surgeries are working these days, the comeback time is a bit shorter.

"She's in good spirits - she's obviously got a bit to get through today, but hopefully she gets through that surgery well and we can find out exactly when she can re-enter the group."

Mott said they will have to be "smart" about the recovery schedule and her return to the team, given the side's extended time on the road with the One-Day World Cup in March.

"We'll have to be smart about that and what it looks like for her, and listen to the surgeons - they're the experts and they'll be able to give us the exact time when she should re-enter.

"But she's an incredibly tough character... the ball hit her quite hard yesterday and her reaction was very stoic and al she just asked for was a bit of water and she was up the back of the nets for a good 15 minutes before she went off to get x-rayed."

Mooney was hitting the ball well after a couple of months off, and despite the incident and the unfortunate timing right before the start of the Ashes series, she was the one apologising to Mott.

"She was apologising to me, which I found quite strange.

"She just said 'I got into a bad decision', but it was a tough ball to face - probably thrown 150 of those to her over the last couple of years that she's pulled for four, but for whatever reason it got through [yesterday].

READ:JESS JONASSEN CAN’T WAIT TO BE BACK ON THE FIELD IN WOMEN’S ASHES

The squad has also been hit with Covid-19 challenges; Ellyse Perry won't play in Tuesday's practice matches as she arrives in Adelaide after a Covid scare, while Australia A members Katie Mack and Molly Strano have tested positive and won't join the group until it travels to Canberra next week.

Mott admits they're not alone in facing these difficulties and have turned a corner, after seeing the BBL handle its situation, and are accepting there will be scares and there will be cases.

"I think what our medical staff have been exceptionally good at is just managing expectations, so I think we've moved past trying to avoid Covid completely and there's a realisation that it may infiltrate our group at different times.

"Where we've tried to be really smart is trying to keep as separated as we can, for as long as we can...

"So if someone does go down, and we're getting tested daily, that we can isolate that really quickly and not take the whole group down.

"I think that's the world we live in at the moment."

These latest injury and Covid dramas only add to a "scattered" preparation - the squad has been stretched across Australia until yesterday.

"I think the English would probably say the same, like it's not ideal," he said.

"But I think every sporting team in the world would say that at the moment and there's certainly no excuse.

"Our team's done as well as they can in preparation, we've had people coming and going throughout the last few days. It seems like protocols dominate most of our conversations, which is probably the way its got to be to get the series up and going.

"But we're really confident today's going to be a fantastic opportunity to play against the Australia A team - great facilities and see what's out there and see how we're playing.

"This is the moment now where we kick into cricket mode. We've done a lot of workshopping what can and can't happen, and I think today signals the start of cricket and I'm really confident the group is resilient and adaptable enough to deal with whatever comes to it."

One of the biggest questions Australia will be looking to answer today is who takes Mooney's spot and whether they elevate an Australia A player for the T20 games or have to look longer-term at who can feature in the Test and ODI matches as well.

"It's something we certainly slept on overnight and this is just the golden opportunity for a few players to put their hand up.

"There's certainly no reason why it can't come from outside the squad, so myself and Shawn Flegler will certainly sit down today with Julie Hayes and work out what is the best for this group...

"If it's best-case scenario and it's only three games, we need to work what that looks like, but we'll probably know a little bit more after today, not just the games, but also the diagnosis.

The Women’s Ashes begins on Thursday, January 20 with a T20 match at Adelaide Oval.