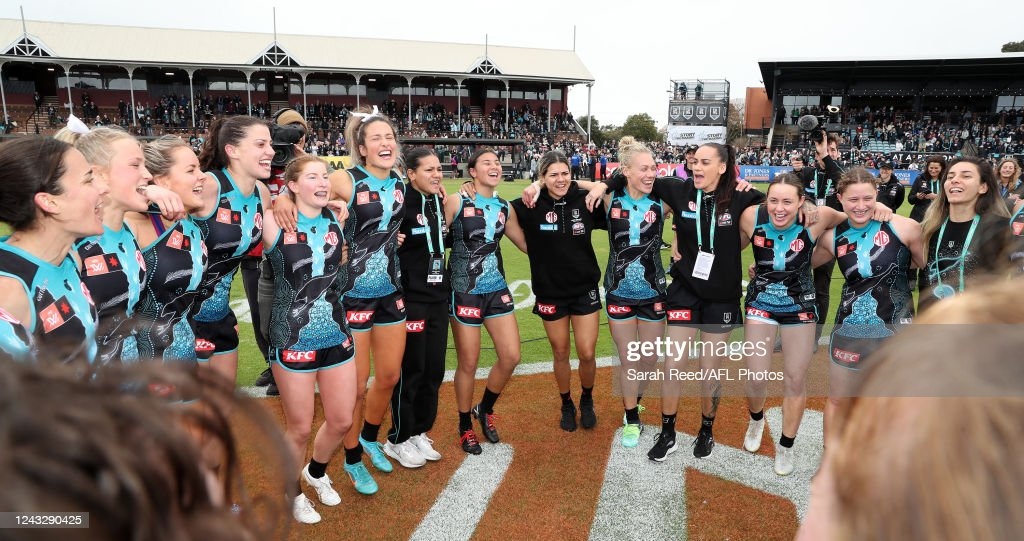 The Port Adelaide Power have recorded an historic first win in the AFLW, a 66 point domination of the Sydney Swans.

The Port Adelaide Power have recorded an historic first win in the AFLW, a 66 point domination of the Sydney Swans.

For the first time, the Port Adelaide song was sung on Alberton Oval after the final siren of an AFLW game, as the Power recorded victory over the Sydney Swans, 68-2.

It was as dominant as performances come from one of the new kids on the block against a fellow season seven expansion side, and an appropriate celebration for Erin Phillips’ 50th game.

Speaking after the game about Phillips’ role at Port Adelaide, Lauren Arnell was “distracted severely” by a captain who just wanted to sing the song with her coach, but found some words to describe Phillips.

“It’s just smarts, and it starts just with team footy, and that’s our captain. I think an undervalued part of Erin’s game, even in previous years, you know you can talk about how good she is offensively, but how she’s helping that young group down there.”

The Power ruled the opening quarter, making the most of 14 inside 50s to one, to open up a 21 point lead that increased as the match went on.

The scoring started with Jade De Melo, who could have scored three last week, nailing her first opportunity today. Port’s other Jade, Halfpenny, scored her first goal after debuting in last week’s draw.

Then, Sarah Goodwin, on debut, laid a strong tackle as the ball was existing 50, to send the ball back inside for Britt Perry to score her first just before the quarter-time siren. It was Perry’s first game in Port colours, returning from an ankle injury sustained in preseason.

The Swans’ first scoring opportunity came into the second term, with goal sneak Aliesha Newman taking a shot on the run. It bounced short and was rushed over for a behind.

Even with the numbers on their side, the Swans found it difficult moving the footy forward, their handball, running game coming unstuck regularly.

Just two behinds were scored for the quarter, one to each side, the margin still 21 points.

Leading the way for the Swans through the first half with 10 disposals, Montana Ham continued to find the footy, taking a strong mark inside 50 in the opening minutes of the second half. Back from the knee injury she suffered in Round One, Ham had the distance, but pushed her kick across the face for a behind.

The Number One pick continued from where she left off in Round One and is “going to be a really good player," Swans’ coach Scott Gowans admitted post-match.

“I thought Mon’s post-clearance stuff and ability to break contests was excellent, and I think, again though, it’s probably just the moment, but if you think about that, that’s a young girl showing the way to the others girls, and it should really be the other way around.

“It’s probably a good thing for the competition, there’s a player like Montana in the competition and playing so well early on, it gives the fans something to come and watch, and it also allows us to say, ‘what can we do next season?’ with players and the talent that’s around the country.”

A passage of kicks to get a better look at goal saw Ange Foley find Phillips, who unselfishly found Julia Teakle. Teakle nailed the set shot and extended Port’s lead to 26.

Port’s forward line was switched on once again and playing team-first footy to result in another goal. A set shot from Maria Moloney didn’t have the distance, but Phillips flicked it out to Kate Surman, who snagged the goal for the home side anyway.

In what had to be one of the plays of the day, weaving through a couple of defenders, Ewings went for the square from 55 metres out and a nice bounce went through for a goal.

Abbey Dowrick must have been inspired, and from a similar spot went for the square and, over the head of Halfpenny, it rolled through for another major.

Ewings kicked her second after the siren for three-quarter time. Last week’s Rising Star was taken high and just had the distance to increase the Power’s lead 52 at the final break.

After having more of the footy to start the third, the Swans were unable to make the most of their inside 50 entries. Every time they looked in, Port had covered the corridor and when they tried to run to penetrate 50, it was Port who came up with it.

A third goal in about a quarter of footy continued Ewings’ impressive game.

Perry’s strong performance on return got even better, as she found herself on the end of yet another score assist from Phillips. It was Phillips’ eighth score involvement from 16 disposals to that point in the game, showing just how influential she can be, despite not kicking a fairy tale goal in her 50th game.

As the final siren went, the Port faithful, who had braved very wet and windy conditions on Kaurna Land, were up and about making plenty of noise for their side’s first win.

Arnell said after the game, that “it feels so nice, just get reward for effort.

“What we’ve been talking about for four weeks now, around applying ourselves for four quarters, sticking to the plan and actually playing four quarters of footy, watching our group put that together is something I’m really proud of.”

But, they most importantly, they see today’s effort and intensity as a strong foundation.

“It’s a starting point, I wouldn’t say it’s the best, we’ll get better.

“We’ve been together I think 14, 15 weeks now, we know we’re very capable of that and the challenge now is that this is a starting point, not an end point.”

On the other side of the game, Gowans was reflective and while it’s an emotional, disappointing loss, wants to find the learnings from it.

“Very disappointing to be honest, it’s not the way we want to perform, and I think it’s one of those ones where you do need to go away and collect your emotions, but I said to the girls after the game, ‘I want to take the opportunity to take the learnings as well’.

“It’s a big step backwards for us and that’s going to happen, I suppose, as part of the process.”

Most disappointing for Gowans was his side’s inability to make the right decisions and stick to their plan.

“I actually felt that we put the ball to spots that we don’t want to do, and we looked at the ground, we came yesterday, and we spoke about what side to play, for instance, and then we get a point kick in, and we kick it to the wrong side.

“So, when you’ve got a controlled ball and you’re not making the right decision, that’s inherently a decision made unpressured, and that’s the difference I felt.”

Next up, the Power travel to the Gold Coast to face the Suns on Sunday, while the Swans host the Hawks in Melbourne on Friday night, after spending the week there connecting to their South Melbourne history.