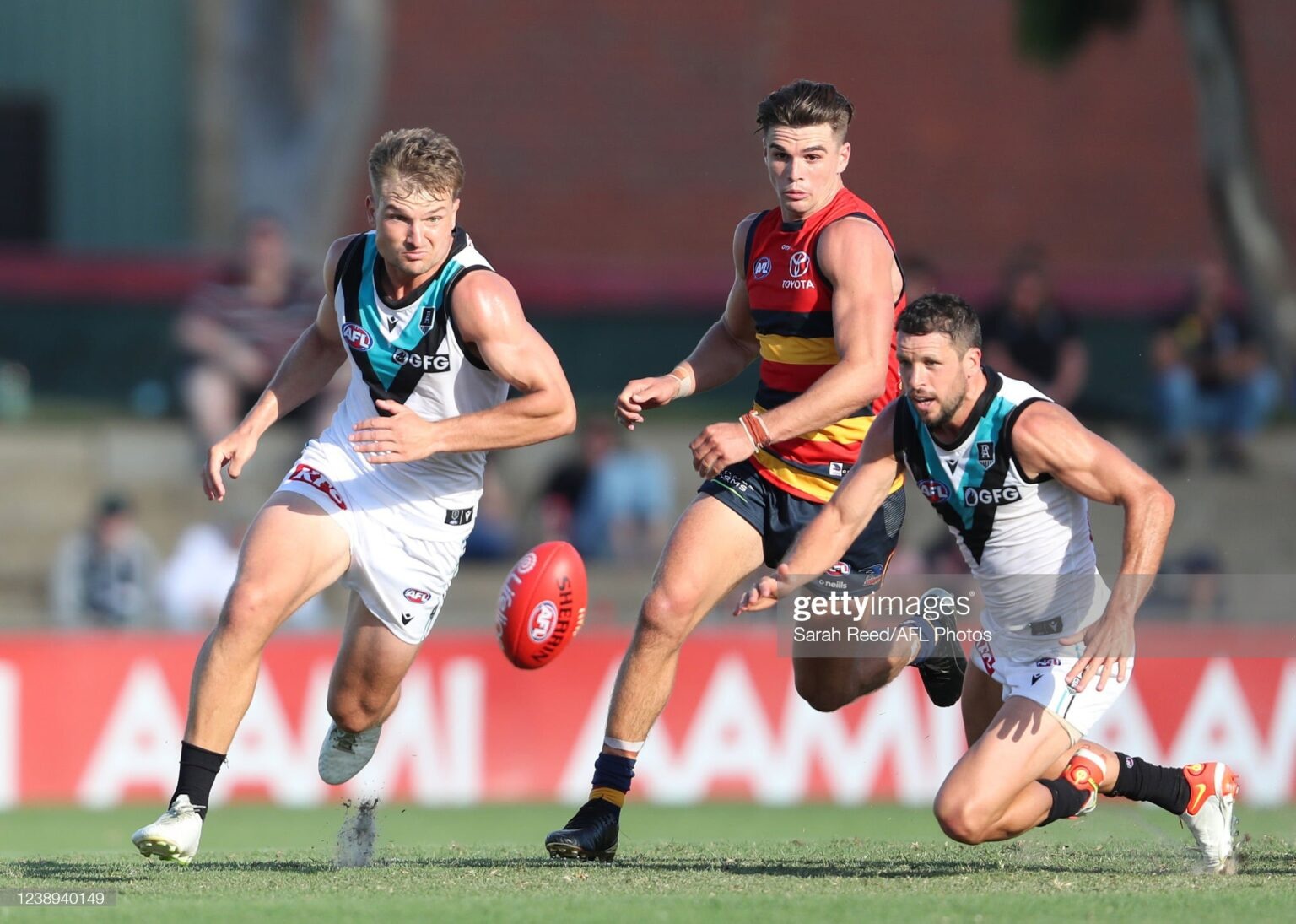 Port Adelaide AFL Season Preview: Can the Power get to the top top top?

Can the Power get to the top top top in 2022 after almost getting there in 2021? Find out with our Port Adelaide AFL Season Preview.

Port Adelaide AFL Season Preview: Can the Power get to the top top top?

Can the Power get to the top top top in 2022 after almost getting there in 2021? Find out with our Port Adelaide AFL Season Preview.

Port Adelaide continued to stick in the top four last season once again being knocked out in the preliminary finals. With their young guns having another pre-season under their belts can the side push themselves into the last Saturday in September.

Port Adelaide was only half a win away from the top of the ladder in 2021 unfortunate falling just short. The season got off to a great start for Port with big wins over the Kangaroos and Essendon by 52 and 54 points to start the season.

Port Adelaide went into the finals with a six-game winning streak including g a crucial two-point win over the Bulldogs to make sure they would secure the all-important qualifying final at the Adelaide Oval.

While Geelong has traditionally got over the top of the Power it wasn’t to be in the first week of the finals with Port coming home by 43 points thanks to four goals by Orazio Fantasia.

It wasn’t to be for Port though with the Bulldogs, the team they had beaten by two points only a few weeks before, running over them by 71 points on the Adelaide Oval. Bailey Smith was the star for the Dogs kicking four along with three from Mitch Hannan to make sure the Power wasn’t to make the Grand Final.

For the second season in a row, Port Adelaide was able to compete against the biggest and best teams but they couldn’t quite get over the line. This was shown plenty of times throughout the season, wins came over Richmond, Carlton and St Kilda before a big loss came against Brisbane the week after.

Going forward Port Adelaide need to find that consistency against the biggest teams, now whether the issue is a physical one or a mental one is still yet unknown.

One of the biggest issues was the consistent injuries amongst some of the best players on the Port Adelaide list. The youngsters Xavier Duursma, Zak Butters, and Connor Rozee all spent time on the sidelines, while some of the more experienced players in Robbie Gray, Orazio Fantasia and Tom Clurey also missed significant periods.

Something for the Power fans to celebrate though was the winning of Port Adelaide’s first Brownlow Medal, the win coming for Ollie Wines. It was an incredible season for the huge midfielder, he almost singlehandedly won matches for the Power at different times during the season.

Fitness was a clear issue last year, their ability to run out matches and keep players on the park made the Port Adelaide season inconsistent. Traditionally Port Adelaide has been one of the fitter teams and possibly it was just bad luck, after all, we know that injuries can happen, hopefully, in 2022 their key players can stay on the field.

The bigger issue though was when Port Adelaide was down they seemed to not be able to pick themselves back up and fight. Their five regular-season losses through the season came against West Coast, Brisbane, Western Bulldogs, Geelong, and Melbourne. Apart from West Coast, these are all top tier teams, Port Adelaide struggled against the best teams.

The coach Ken Hinkley is clearly under some pressure going into 2022, while he has pushed Port Adelaide up to the top of the ladder he has been unable to take them to that next stage.

The Port Adelaide midfield is incredible as shown by Ollie Wines winning the Brownlow Medal in 2021. Wines himself was rated elite in disposals and handballs as well as above average in every other category.

Travis Boak is also a gun, especially with his tackling in the midfield, unfortunately, he is moving on in age so it will be yet to be seen if he can continue at the elite level.

Scott Lycett also had an incredible 2021 being ranked above average in everything except goal kicking. His 520 hit outs were almost 300 more than his next teammate, in reality, a lot of Port’s success in 2022 will come down to whether he can stay on the park.

Charlie Dixon will not play in week one of the season with Todd Marshall likely to take the half-forward position with Mitch Georgiades sitting at full forward. Dixon being out is, in some ways, a strength and a weakness. Obviously, he is a great player but him being out allows the development of a younger forward line.

Perhaps their only on-field weakness is in the backline, Aliir Aliir and Tom Jonas are the two big pillars of that backline but outside of that intercept marking capability, there isn’t a huge amount of talent in the backline.

Byrne-Jones is a great run off the half-back line and Riley Bonner is up and coming but the rest of the backline looks awfully short. And that isn’t short on talent it is short on height, against some big-bodied forward the defence may struggle.

The ruck will also need to be looked at, while Scott Lycett is an excellent ruck his backup in Peter Ladhams has now gone to Sydney. Perhaps Charlie Dixon will have to spend some more time in the middle.

Josh Sinn comes into the Port Adelaide set up in 2022 after being picked up in the rookie draft from the Sandringham Dragons. Incredibly he was born in 2003 just showing how young these players are in today’s game.

As a defender that can also push into the midfield, he will play a similar role to Byrne-Jones for Port Adelaide. His speed is said to be one of his biggest assists being able to burst through packs and hit up the forward line with pinpoint accuracy.

He also has leadership capabilities, he led Vic Metro to an undefeated carnival run, offering some great run off half-back while playing important minutes in the middle.

The question will be though whether he is what Port Adelaide needs in the backline. Port’s backline needs height and at only 186cm he isn’t quite of that elite level that would be able to stop a Buddy Franklin. Perhaps running off the wing may be where Sinn finishes up at AFL level.

The Power will continue to build upon a great season last year that ended in a lot of disappointment. However, with a relatively fit list and a young list with a lot of talent coming through, the only way to go seems to be up.

With Port having the benefit of playing a lot of the difficult teams at home they should be pushing to the top of the ladder once again. The only question is whether they can take that final step in September.