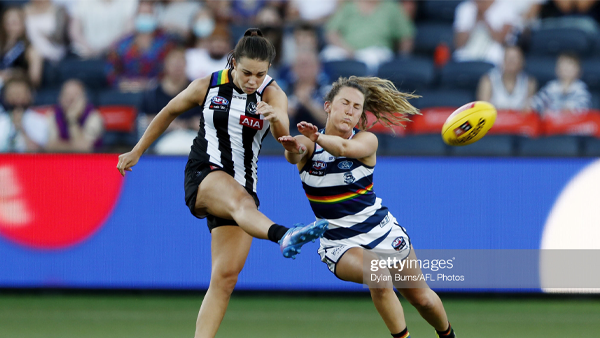 Pies come out unscathed and undefeated in physical contest against Cats

It was a pressure-laden contest between Geelong and Collingwood and despite the winless home side getting to within four points, it was the visitors who claimed an 11-point win.

Pies come out unscathed and undefeated in physical contest against Cats

It was a pressure-laden contest between Geelong and Collingwood and despite the winless home side getting to within four points, it was the visitors who claimed an 11-point win.

It was a fiery contest to begin Pride Round in the AFLW with Collingwood travelling to GMHBA Stadium to play Geelong and coming away with a hard-fought 11-point win to continue an undefeated 2022 season thus far.

Geelong got to within four points midway through the fourth quarter, however, with constant pressure all around the ground, Collingwood celebrated the 3.6 (24) to 5.5 (35) victory.

The Cats were dominant at the centre clearances and that use of the ball worked well in getting forward, however, it would come to no avail as the team weren't able to get a major, instead kicking the first two scores of the game, which were both behinds.

Down the other end, although Geelong's defence was solid, having players back when its opponents kicked into vacant space, but Aishling Sheridan got away for the first goal of the game, punishing Geelong's missed chances at the other end to put her side up.

The Cats were able to find some open space of their own in the first quarter, linking up with each other well off the half-back line, that build-up transition helping move the ball forward. The Cats showed they weren't afraid to take the game on up the middle, exemplified by Sophie Van De Heuvel who ran from one end of the centre square to the other, taking a few bounces and shrugging off an Amelia Velardo tackle.

That particular play resulted in an accurate kick to Jordan Ivey who took a contested mark 30m out on a slight angle, able to convert for Geelong's first goal of the game - and first first-quarter goal of the season - as the side regained the lead.

Brittany Bonnici won a centre clearance immediately in the resulting ball-up after Geelong's goal, which saw Sheridan mark inside 50 however, didn't want to kick for goal, instead kicking to the top of the square, but it was fumbled over the line as Geelong got out of trouble again via that attacking, running style of play up the middle.

Continuing to find space coming out of the backline, Collingwood's players were locked in one-on-one battles all over the ground, but Chloe Molloy was able to get ahead of her opponent with speed, finding a nice bounce, however, the launching kick from outside 50 didn't have the same trajectory with the resulting score being a behind. Two behinds followed the Molloy miss - a Sophie Alexander poster and another Molloy miss which evened up the scores.

Some spice was injected into the game when Collingwood's Lambert and Geelong's Georgie Prespakis got into a scuffle following a sling tackle by the former, on the latter as Collingwood's Alison Downie and Geelong's Olivia Fuller also got into each other in support of their respective teammates.

Collingwood finally got reward for its offensive efforts and constant forward pressure, with Eliza James getting her first goal of her newly-started AFLW career, running past and collecting a Meg McDonald handball and powering ahead towards goal, getting the ball onto her boot, seeing it sail through for six points as teammates got around the 18-year-old.

The defensive pressure continued from the Pies, with Chantel Emonson in two minds as to which way to kick inside the Cats' defensive 50, only for Alexander to complete a strong tackle, who finished just as strongly with an outside-of-the-boot shot that went in between the big sticks, increasing the Pies lead.

However, such was their dominance out of the middle, it wasn't long before the Cats responded close to halftime and with some outside run, drilled the ball inside 50 for Kate Darby to mark a Nina Morrison floater at the top of the goalsquare. She kicked her first goal of the season as a result and going into the break, the Pies held a six-point lead.

WHAT THE RUCK- PREVIEWING PRIDE ROUND

Geelong had a golden opportunity to kick the first goal of the second half when an impressive run along the boundary line heading inside 50 from Ivey, saw the kick head towards a one-on-one at the top of the goalsquare. Although, Darby dropped a chest mark with the ball going to ground and bouncing past the goal line for a minor score despite trying efforts to get a foot to it.

The hot, physical, pressure-laden game of football between both sides continued to heat up, although Geelong appeared sloppy in trying to get the ball out of its defensive end once more, the small kicks not doing well for the team.

In turn, Collingwood's constant and consistent ability to mount pressure on its opponents, and with the building of momentum, Molloy got on the end of a goal after repeated efforts from her teammates in the minute leading up to it.

Another centre clearance to begin the fourth quarter saw the Cats get another chance with the ball inside 50, but just for another behind until Ruby Schleicher, on kick-out duties, kicked it out on the full. Van De Heuvel took off from the boundary to kick it to the top of the square where, despite not taking the mark, Morrison still fought at ground level and won a head-high free-kick. Due to the collision, Darcy Moloney took the set shot and made no mistake, getting the Cats to within four points.

Clinging onto hope that they could find their first win of the season, the Cats appeared desperate to defend, especially with the threat the Pies possessed. A dropped mark from James and continued follow-up attempts along the ground after the Pies got away inside 50 were quashed as Emonson smothered the ball, and then took the ball over the goal line while being tackled, for a rushed behind.

Although those defensive efforts would come undone just seconds later as, rebounding out of its defensive 50, Molloy took an overhead, contested mark at centre half forward and with a 50m penalty against Julia Crockett-Grills for overstepping the mark, the Collingwood forward gifted her second goal 15m out, giving her side enough room to breathe with time trickling down for the home side to fight back, as the game came to an end.

Jamie Lambert was the leading ball-winner on the night, collecting 22 touches, continuing her ball-winning skills while Amy McDonald wasn't too far behind, recording 20 possessions. McDonald also recorded a game-high 12 tackles as the intensity of her game was on show along with four clearances, a stat line that was topped by Lambert with seven.

The ruck battle between Fuller and Downie was won by the former, finishing with 22 hit outs to her opponents 18 despite the latter's team recording more clearances, especially through stoppages around the ground, helped by Lambert and Mikala Cann.

In Round Four, Geelong is currently scheduled to play Brisbane at Maroochydore Oval on Saturday, January 29 from 4:10 pm AEST while Collingwood will be at home, taking on Fremantle at Victoria Park on Sunday, January 30 from 3:10 pm AEDT.