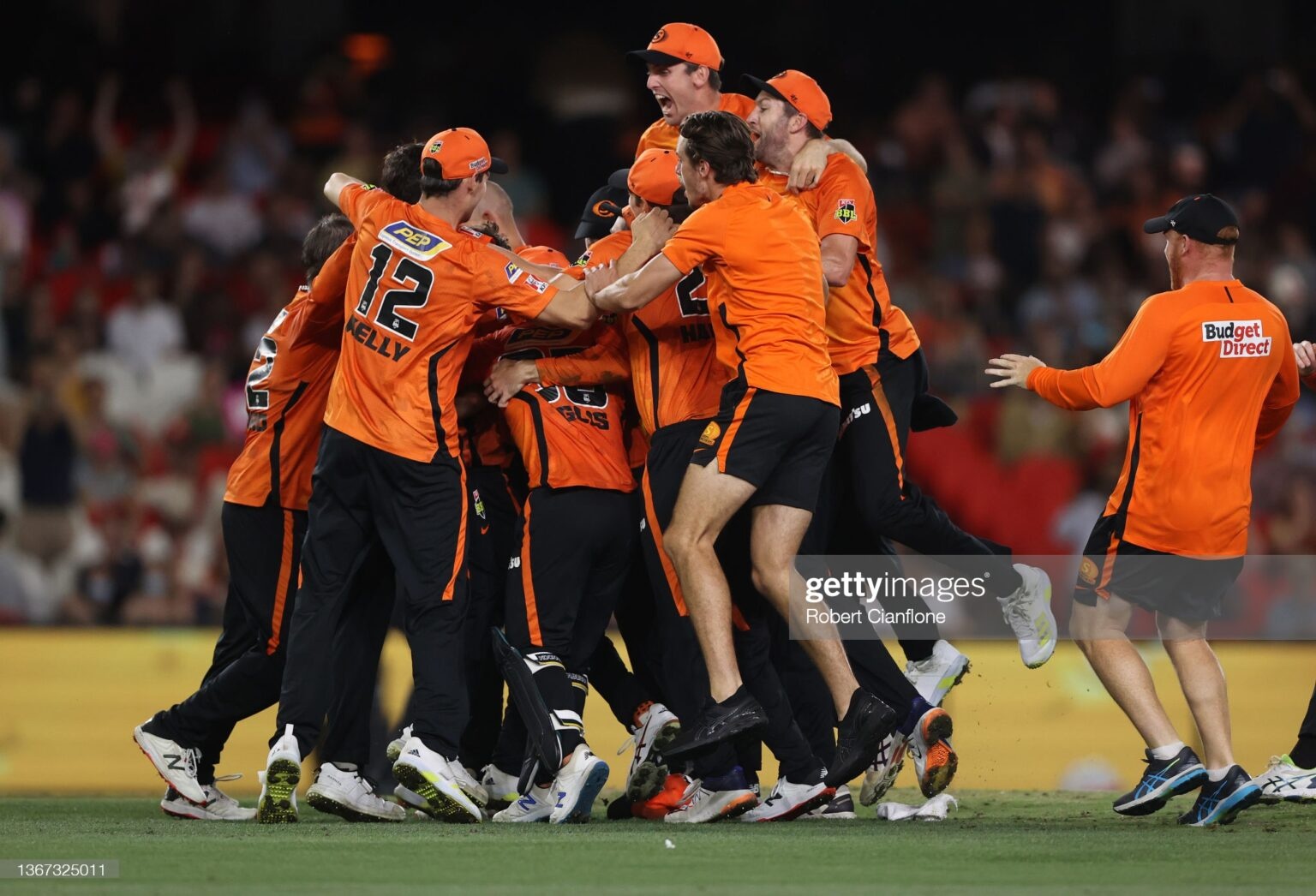 The Perth Scorchers have won the BBL|11 title, beating the Sydney Sixers by 79 runs at Marvel Stadium as the franchise completes the WBBL/BBL double.

The Perth Scorchers have won the BBL|11 title, beating the Sydney Sixers by 79 runs at Marvel Stadium as the franchise completes the WBBL/BBL double.

The Perth Scorchers have added to the WBBL|07 win by the women's team to take the BBL|11 Final win against the Sydney Sixers.

The Scorchers were heavy favourites going into the match and in the end, were simply too good against an injury and COVID-riddled Sixers lineup. In the end, the Perth Scorchers came home by 79 runs against the Sydney Sixers at Marvel Stadium.

The Perth Scorchers were the clear favourites going into this final, all its players were fit and ready to go. In comparison, the Sixers barely had 11 fit for their last match and things got even worse with Jordan Silk being ruled out with this issue even leading to all-rounder Dan Christian's pleading for players on social media.

Thankfully for the Sixers, Dan Hughes managed to pass his fitness test allowing him to slot into the eleven in place of Jordan Silk. That was just the start of a good day with Moises Henriques also winning the toss and deciding to have a bowl first again a very strong Scorchers lineup.

Things couldn’t have got much better for the Sixers early, taking the wicket of Kurtis Patterson (one) in the second over from the bowling of Jackson Bird. It was all slow going for the rest of the powerplay with Mitch Marsh not scoring from the first six balls and Josh Inglis failing to get going. 1/14 was the score as the field went out.

As soon as the field went out, Josh Inglis’ eyes lit up, but it didn’t work with him reaching too far for the ball and being stumped by Jay Lenton. With Mitch Marsh not really able to find any runs things looked really bad for the Scorchers as the Sixers got up and about, finally believing it could win this match.

The spin continued with Nathan Lyon taking the sixth over of the match. He also struck with his first ball, as Marsh tried to go big but didn’t quite time the ball hitting it down the throat of Dan Christian at long-off.

Another wicket came for Lyon only five balls later with Colin Munro reverse sweeping the ball straight to the gully. At this point, the score was 4/25 and the game almost looked beyond the Scorchers, but of course, you can never rule the Scorchers out of anything.

AJ Tye admitted he was nervous with the Scorchers in a spot of bother.

"I was nervous as hell, I couldn't sit still, a huge credit to the Sixers they were a worthy opponent to beat today", Tye said.

With the fourth wicket down, out came Laurie Evans who has been incredible for the Scorchers this year, doing absolutely everything that has been asked of him. Many teams at 4/25 would’ve slowed the run rate and just built for the last five overs but not the Scorchers. The batters went huge straight away with 55 runs coming from the next five overs with Evans and Ashton Turner (54) at the crease.

The runs kept flowing for the Scorchers with both players finding the boundary with ease. Laurie Evans in particular went over the rope three times as the Scorchers batters targeted the spin of the Sixers taking Steve O’Keefe for 43 from his four overs.

Jackson Bird was also X-factored out of the match after the tenth over. With the Sixers having plenty of bowling options, it brought in Justin Avendano to strengthen the batting order.

"The guys sacrificed a lot and I'm just glad I could contribute tonight," Laurie Evans said after claiming player of the match.

Turner went one too many times off Steve O’Keefe, edging one out to the short third man for an easy catch. It meant that the Sixers finally got into the bowling all-rounders with Agar coming to the crease, although it was 10 overs later than many thought it was going to.

Ashton Agar was up to the task though finding the boundary a couple of times including off his first ball. He made his way to 15 from nine balls before he missed a full toss on the stumps and had to walk back to the dugout with the score on 158.

A couple of good overs at the end of the innings pushed the Scorchers to a huge score of 6/171 from its 20 overs. It was an amazing comeback particularly from Laurie Evans who finished on 76.

With the ball, it was Hayden Kerr that was once again the one to watch taking 1/20 from his three overs. Dan Christian (0/28), Ben Dwarshuis (0/22) and Sean Abbott (0/27) also all chipped in with the ball although didn’t take a wicket between them. It was certainly going to be a difficult chase for the Sixers who were missing a couple of batters from their line-up.

Josh Philippe and Jack Edwards were both missing at the top of the order with COVID which meant replacement pool player Nick Bertus (15) and Hayden Kerr (two) were the ones to open the batting. Kerr smashed his way to 98 to get the Sixers to the Final but it wasn’t to happen this time, getting out for only two in the second over.

A small partnership came together between Dan Hughes (42) and Bertus, but they just didn’t score fast enough chasing a 170+ total. Bertus eventually had to go at the end of the fifth over, from the bowling of the captain Ashton Turner (1/6).

It was an interesting choice to bowl Turner with the Scorchers having six full-time bowling options, but it certainly worked with the over only going for six runs as well as picking up the wicket.

The pressure then fell onto the big broad shoulders of Moises Henriques (seven), but he wasn’t up to it tonight. He came into the match under the injury cloud but that didn’t matter tonight with him not being out there long enough to test that injury. He was out at the end of the seventh over trying to sweep Ashton Agar.

A couple more wickets then fell either side of the drinks break as Dan Christian (three) and the X-Factor player Justin Avendano (one) both had to go back to the sheds. After Avendano, it was Sean Abbott (one) and from there it was almost guaranteed that the Scorchers would win this match, it was just a matter of when, not if.

The Sixers then required 98 from the final eight overs with only five wickets left in the sheds. It was a daunting task and in the end, they couldn’t quite get there.

Would Steve Smith have made a difference? Almost certainly but famously, Cricket Australia was stern in its rejection of him playing, deciding such multiple times over the last week to not allow him to be in the squad.

Dan Hughes eventually couldn’t bat in the pain of his hamstring injury any longer, being run out to a single that wasn’t there. He was the last recognised batter and with just the Sixers bowlers to go, it just wasn’t to be for the men in pink.

The wickets then continued to tumble with the Sixers having no choice but to look for the rope. First, it was Sean Abbott hitting one right down the throat of the deep mid-wicket, then Dwarshuis (zero) edged behind to put AJ Tye (3/8) on a hattrick. Nathan Lyon managed to keep the hattrick ball out but it will be of little worry for AJ Tye who will enjoy tonight's COVID-safe celebrations.

It gave the Perth Scorchers the win in the BBL|11 Final, winning by 79 runs against the Sydney Sixers.

AJ Tye spoke straight after the final ball was bowled.

"It's unbelievable and overwhelming joy, it's been so long away from home and we made it worth it," he said.

"This is up there with the best win we've ever had, eight weeks on the road, this group was so good."

As the final wicket fell, Jhye Richardson copped one on the nose getting a serious bloody nose. He spoke on the incident.

"I was busy appealing and Colin Munro ran in from square leg and put his shoulder into my nose, it was worth it though" he told.

"Perth was obviously too good for us today and have been too good a few times this season," he said.

"A few more than eighteen this year and I'm proud of everyone, I love you all and we've had a great season considering everything that has gone on this year.

'It's been a pretty extraordinary season making all the games go ahead, and finally, I'd like to say well done to the Scorchers, you've been the best team all year and you deserve this win."

Looking back on the season it has been quite a remarkable one for the Perth Scorchers as the club has only played one match in Western Australia and are now in limbo not being able to go home. For now, though, it won't be worrying about home as the celebrations get underway in Melbourne.

"Everyone has made so many sacrifices for this season. The Sydney Sixers have been the best team over the last couple of years and we know the names on the playing sheet don't matter and every game against you will always be competitive," he mentioned.

"To all of our players and staff it's been a long time on the road and I'm so proud of all of you."

The Sixers were just unlucky in the end, the COVID infiltrated its camp at the wrong end of the season and a contentious call meant that Steve Smith wouldn't be playing for the side. On a different day with a full-strength team, this match would've been much closer than what it was tonight.

Finals, of course, are always tough and tonight we likely say goodbye to one of the best T20 bowlers Australia has produced in Steve O'Keefe. It's been a pleasure to watch him over the last decade and he finishes with 80 BBL wickets at an average of 24.31.

The Scorchers season was built on the back of high-quality batting and incredible bowling. The Scorchers didn't have one stand out player although they all had their days at different times. Mitch Marsh, Colin Munro, Laurie Evans, Ashton Turner and Kurtis Patterson all hit over 300 runs for the season at strike rates of 140 or more.

With the ball, Ashton Agar, Peter Hatzoglou, Jason Behrendorff, Tymal Mills, Matt Kelly and AJ Tye all took more than 12 wickets. AJ Tye though continued doing what he does finishing the season with 25 wickets -the second most of the BBL|11.

Three-peats are almost never heard of in cricket and that was proven once again with the Sixers not managing to get over the line in the end. The Scorchers continue its work as the most consistent team in BBL history, perhaps the most successful T20 franchise in the world, and with a lineup, like it had tonight you can certainly see why.

In the end though the Perth Scorchers are the winners of BBL|11 giving the franchise its fourth BBL series victory. Things started well for the Sixers today but the man of the match Laurie Evans and skipper Ashton Turner were too good in the end. The Scorchers become only the second team after the Thunder in 2015/16 to do the WBBL/BBL double.

Now, the domestic players move back to state cricket to finish off both the Marsh Cup and the Sheffield shield while the Australian players move onto a camp ahead of the T20 series against Sri Lanka.