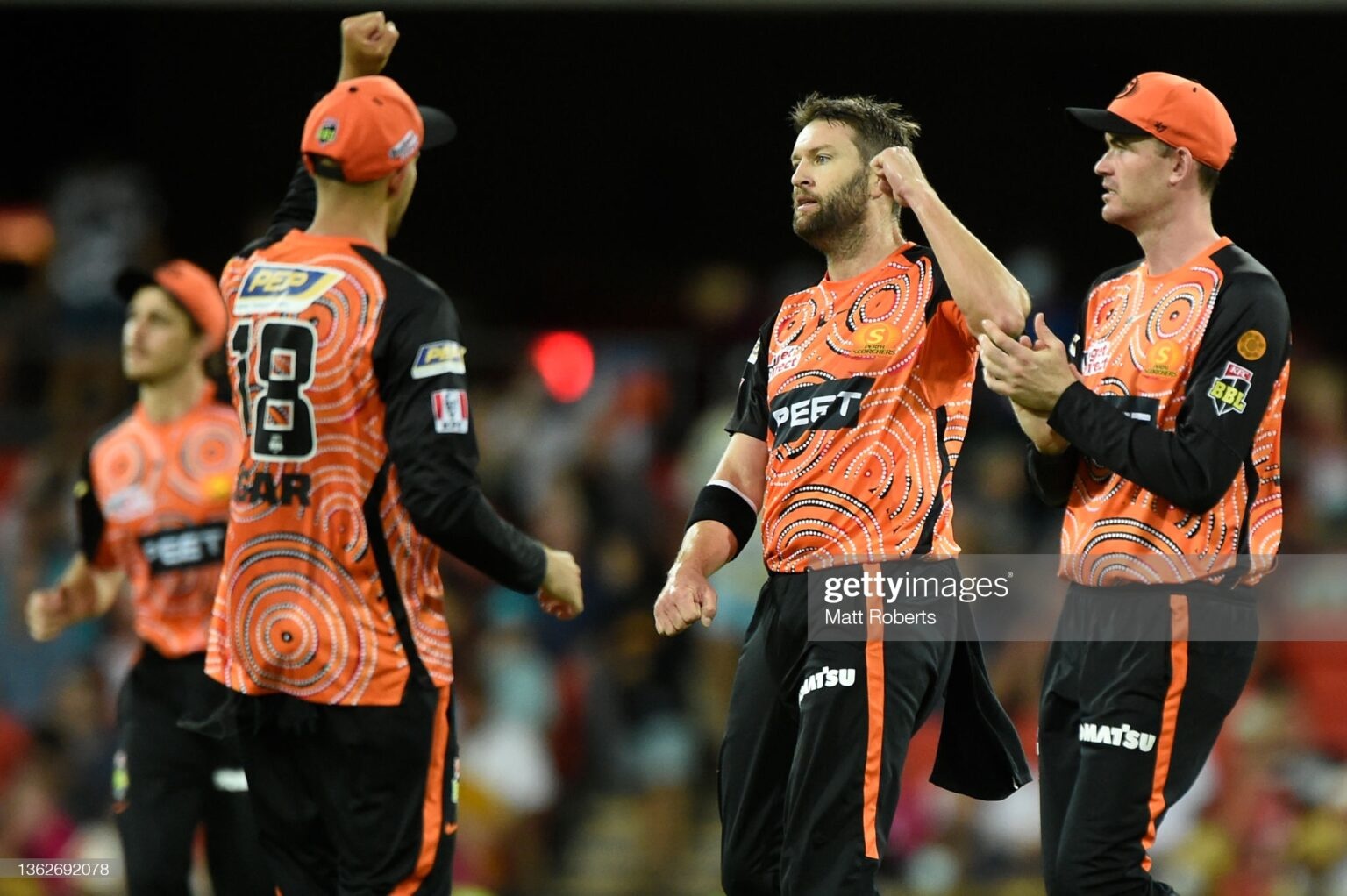 The Perth Scorchers domination continues with a victory over the Sydney Sixers at Metricon Stadium. They managed to win by runs to cement their place at the top of the table.

It was 2 pm today when the Scorchers got the call that they would be playing tonight at Metricon Stadium. The Brisbane Heat had been made aware of at least two positive antigen tests and, consequently would need to do PCR tests on the whole squad. Those tests results couldn’t come back in time, so a replacement team, in the Scorchers, was called up.

The Scorchers had the first win with the bat flip, and captain Ashton Turner decided the Scorchers would bat first, a good choice considering every win from the Scorchers this season has come batting first.

The Sydney Sixers started well swinging the ball around, Jackson Bird (1-22) took the early wicket of Cameron Bancroft (6) to put the Scorchers on the back foot. A good partnership between Kurtis Patterson (27) and Colin Munro (27) took the Scorchers to the drinks break; however, their score was only 62.

On most surfaces, a ten-over score of 62/1 sets the tone for a total of more than 160. The Sixers bowling was incredible even after Steve O’Keefe (0-15) had to leave the field with a finger injury, a dislocation from a caught and bowled opportunity.

Dan Christian (2-14) had to use all of his vast experience as he took the wickets of both Laurie Evans (0) and Kurtis Patterson in the 11th over. From that point, the Scorchers looked done, but Aaron Hardie (45) had something to say about that. Christian spoke post-game about his own efforts with the ball.

“I just tried to bowl it into the wicket and let the wicket do the work for me. I bowled a couple of slower ones but the majority into the wick; they couldn’t get in any rhythm, and it worked.”

The Scorchers took the power surge with Ashton Agar and Aaron Hardie having only faced a few balls each. This didn’t matter as they took advantage of the fielding restrictions to throw the bat around and add 30 crucial runs in two overs.

While the Scorchers lost wickets in the last few overs, the work that Aaron Hardie and Ashton Agar (29) did was vital in getting the Scorchers to a potentially winning score of 8/143.

Dan Christian was of the belief that 143 was an above par score considering the conditions.

“The way we started it was a bit above par. The wicket was two-paced and had undulations in it, and it was probably a 130 wicket, particularly with the start we got off to.”

THE BIG BASH IS AT THE HALFWAY POINT. HOW ARE THE TEAMS DOING?

While 143 was not a bad score, it was below the average at Metricon of 157. As such, the Sixers would’ve felt confident at the innings break that they would’ve chased this low score down. Things didn’t start all that well though.

The opening bowlers from Perth were super quick, often hitting the 150 mark on the speed gun, even if Mark Waugh on commentary wouldn’t believe it to be true.

Lance Morris (2-25) and Tymal Mills (3-29) both struck early, removing Phillippe (0), Vince (5), Edwards (1) and Henriques (5) within the first four overs. It will be the final match for both Vince and Mills as they now travel to the UK to meet up with the England T20 squad.

The Sixers were in all kinds of trouble as Dan Christian walked out with the score at 4-16. Dan Christian and Jordan Silk (16) then pushed the ball around for a few overs. While it was a frustrating partnership to watch, Christian offered up a reason for the slow going.

“They bowled well at the start and left ourselves too much to do. We tried to take it deep, we saw Hardie and Agar go big at the end, Jordan Silk and I tried to bunt it around for a bit, but Silk got out, and we just left it too late.”

Left it too late, they certainly did. Silk was out with the score only 67, from there, it was all on the shoulders of Dan Christian. For a moment, at least it looked like he was going to do it as well.

He struck four sixes and five fours on his way to 73. Unfortunately, he mistimed one to cover with 1.1 overs to go and was dismissed. From there, the Sixers had no chance with Hayden Kerr (13) and Jackson Bird (1) finishing out the overs.

The preparation for this match was obviously not easy for either team, which Dan Christian touched on post-game.

“It was difficult preparation wise; we were gearing up for the Heat for the last few days. It was nice for me and Jordan Silk to get some runs, we didn’t play our best game, but we took it to the last over, so there are a lot of positives.”

The Sixers will have to back up again tomorrow to take on the Heat in the game that was meant to be played tonight, but this is something that isn’t bothering Chrisitan.

The BBL will see two games tomorrow as the Adelaide Strikers take on the Hobart Hurricanes in Adelaide and the Brisbane Heat take on the Sydney Sixers on the Gold Coast.