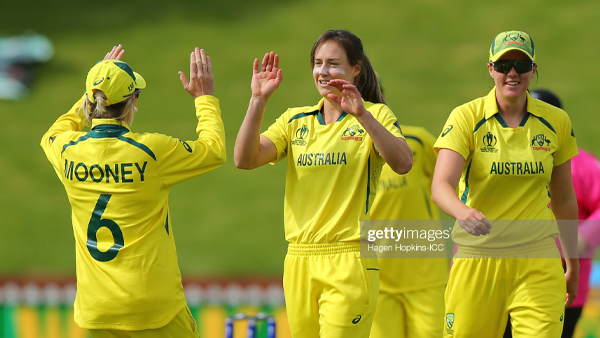 Australia won its fourth game of the Women's Cricket World Cup, beating the West Indies by seven wickets, helped by an opening spell of bowling from Ellyse Perry, and a batting effort from Rachael Haynes.

Australia won its fourth game of the Women's Cricket World Cup, beating the West Indies by seven wickets, helped by an opening spell of bowling from Ellyse Perry, and a batting effort from Rachael Haynes.

Both sides lost early wickets in their respective innings, but Australia's bowling unit was able to restrict the West Indies to 133, chased down in just over 30 overs off the back of Rachael Haynes' 83*.

West Indies captain Stafanie Taylor won the toss and elected to bat, however, the number four batter made her way to the middle of Basin Reserve in Wellington earlier than expected after the side lost two quick wickets in the second over of the day.

Deandra Dottin and Hayley Matthews walked to the crease as the West Indies' opening pair and took two runs from the opening Megan Schutt over.

In Ellyse Perry's first over, she bowled two wides before getting the early breakthrough, first removing Matthews (zero from four) with the ball crashing into the top of off-stump. The veteran struck again the very next ball as Kycia Knight (zero from one) caught an outside edge, the ball becoming safely nestled in the gloves of wicketkeeper Alyssa Healy, the West Indies falling to 2/4 after 1.3 overs.

The hat-trick ball didn't yield a wicket, with Taylor flicking a full toss to the off-side to get off the mark with three runs, beginning what would become a 30-run partnership between her and Dottin, one that was littered with second chances too.

In the fifth over, Dottin was given out LBW off a Schutt full-toss, with the batter missing an attempted shot towards mid-wicket. However, on review, a minimal spike showed up as the ball went past the bat, leading to Dottin receiving a lifeline - one she took on as she hit a four behind square leg two balls later.

The next over, as Perry continued from the other end, Taylor was given out LBW, unable to judge a yorker, the ball hitting her back leg. Taylor reviewed, and despite walking off and accepting her fate after seeing the replays, had to walk back after ball tracking showed the ball missing down the leg side, with the decision overturned.

The runs started drying up for the West Indies with Schutt and Perry continuing their respective spells at either end of the ground, and the pressure continued to mount as Perry found another breakthrough, claiming the wicket of Dottin (16 from 36), slashing at a wide delivery that caught an edge to a diving Meg Lanning at first slip as the 10-over powerplay wrapped up.

The first over back after the powerplay saw Australia make its first bowling change, bringing Tahlia McGrath in for Schutt, with it ending up being an expensive one, 10 runs coming off it as Taylor found good connection between bat and ball.

McGrath and Perry continued to bowl until the 18th over when Australia turned to spin, entering Alana King, then Ash Gardner into the attack, neither giving up many runs as the Australians fielding and bowling remained tight. The pressure contributed to Gardner claiming two wickets in the one over - Shemaine Campbelle (20 from 51) flicking the ball to Beth Mooney at mid-wicket, and Chedean Nation (zero from four) being bowled.

With the West Indies reeling after losing wickets in quick succession, Chinelle Henry (10 from 11) looked to battle hard, hitting a couple of fours before ultimately being run out attempting a third run on a Taylor hit behind square leg.

The West Indies captain hit a single to bring up the team's 100-run total in the 34th over, and she targeted King and Jess Jonassen on occasion to get some more runs on the board as the wickets still tumbled around her, this time Aallyah Alleyne (10 from 34), ballooning an edge to Schutt inside the circle on the leg side.

Taylor (50 from 91) then brought up her own milestone, a half-century off 89 balls, with a drive to deep cover for two runs off Gardner's bowling. However, two balls later, she had to go back to the sheds after missing a flick to the off-side with the ball cannoning into the pads and despite a review, it was hitting the wickets, upholding the umpire's decision.

Jonassen took the final two wickets of the West Indies' innings, first bowling Shakera Selman (six off 19) and then ending the innings by getting Karishma Ramharak (four from 17) to seek out Gardner at deep-mid-wicket.

Alyssa Healy and Rachael Haynes walked out to the middle to start Australia's run chase, and after the first two overs went for three runs each, before Healy (three from eight) was the first to depart when Hayley Matthews reacted swiftly to a drilled hit back in her direction for a caught and bowled. It got worse for Australia in the following over, with Meg Lanning (zero from six) caught at slip by Matthews, off the bowling of Shamilia Connell.

With Australia at 2/7, Haynes became the destroyer, as Ellyse Perry provided an assisting role at the other end, but with a few boundaries, and after surviving a couple of LBW reviews, edges not carrying to fielders and missed run out chances, Haynes was working towards the required total, while building her own score further.

The 51-run partnership came to an end when Perry (10 from 31), looking to drive the ball, found a Chinelle Henry edge to slip, caught by Matthews. Beth Mooney entered into the middle of the ground and worked in tandem with Haynes until the very end.

Haynes brought up her half-century in the 22nd over, pulling a short delivery to backward square leg for four off the bowling of Henry. Haynes exhibited a want to get the game done early, slogging the ball at every possible chance as the required run rate decreased, bringing up the 50-run stand in the process.

Haynes hit the winning runs with a pull shot over mid-wicket to finish on 83* from 95, while Mooney contributed 28* from 42, as Australia won its fourth game of the 2022 Women's Cricket World Cup, by seven wickets, remaining on top of the standings ahead of the final three games of the preliminary stage of the tournament.

While Haynes was the match-winner in the end, Player of the Match honours went to teammate Ellyse Perry for her bowling figures of 3/22 from eight overs. Speaking to the broadcast post-game, Perry commented on the ability for the side to put in a collective bowling performance, as well as her own.

"It was really nice conditions today, there was definitely a bit in the wicket," she said.

"I think the wind and the slope is a nice factor here so it was really cool to put that bowling performance together as a group. I thought the way through our bowling innings we were really effective.

"[I've] probably just [been working on] some consistency really, around my shape, especially early with the new ball and then just a few variations on that throughout an innings and just trying to hit a good length I guess.

"I always find [that] the more I bowl, I guess the better you feel with rhythm so it's really nice that Ben [Sawyer] puts up with me, I drag him out for a lot more than he's probably paid to do but I really appreciate that."

Australian captain Meg Lanning also made mention of the bowling unit, no matter who gets the ball, making a positive impact early, aided by the batters in the chase when she spoke post-game.

"That's the beauty of our squad, is we've got such great depth and anyone who does come in makes an impact on the game, they're not just part of the team, they're able to change the game. I thought early wickets up front today made a difference in the game but really sort of put us in front and put them under pressure," she said.

"I thought Rach and Moons at the back-end did extremely well. Obviously losing early wickets is not ideal but what we have shown throughout the tournament is that we can rebuild and then really push towards the end."

Australia's next game of the 2022 Women's Cricket World Cup is against India at Eden Park in Auckland on Saturday, 19 March from 12pm AEDT.