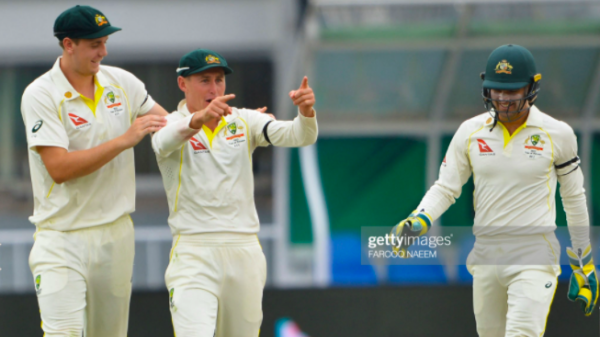 The Pakistan batters continued to frustrate Australia's bowling attack on Day 2 as they piled on the runs before a late declaration.

The Pakistan batters continued to frustrate Australia's bowling attack on Day 2 as they piled on the runs before a late declaration.

Pakistan batted and batted away the day, tiring the Australian bowlers, before misjudging its declaration, getting just a single over against the Australians before bad light brought about an early stumps.

Pakistan resumed batting on the second morning at 1/245, after a successful opening day. Imam Ul-Haq and Azhar Ali were at the crease, and had runs abounding already, but that didn't stop the pair from continuing to pile on the hurt.

At lunch, the score had been increased to 302, without further loss, as Azhar Ali was on 95 and Imam Ull-Haq was on 154. Shortly after the break, the pair brought up the 200 run milestone for the partnership, before Ali celebrated a personal milestone with a century,

Ul-Haq was eventually dismissed for 157, given out lbw off the bowling of Pat Cummins. After Ul-Haq reviewed the decision, it was found to be in line, and the opener's innings came to an end.

With the score at 2/394 at tea, Pakistan was in control, and the Australian bowlers were fatiguing, It took an act of brilliance to dislodge the next wicket.

Marnus Labuschagne, after fielding out for 147 overs, picked up and threw the stumps down to run out Babar Azam for 36.

Labuschagne spoke after the day about the focus he puts on his fielding, and taking opportunities like that.

"It's definitely something I put a lot of effort into, and a lot of work," the Australian batsman said.

"I've really worked on trying to hit the stumps more often. I think in previous years, when I was a bit younger, I was a bit erratic, and I'd rush the opportunities that I had. I'd create opportunities but I would be able to take them.

"This year especially I've found I've been able to take a few more run out opportunities, but for me its just nice to be able to help the team out like that."

Labuschagne also rolled over his arm, bowling 12 overs of his part-time leg spin, on the day after Shane Warne, Australia's greatest ever leg spin bowler passed away.

"I've seen so many people, I've been scrolling through my Instagram and so many people who don't even support cricket, are saddened by this, which shows the impact he had on, not only his generation but the generation after as well.

"I felt a little bit special, being able to bowl leggies out there. Obviously nowhere near as much turn there, but I turned a few and that gave me a little soul there.

"It's a very sad day, and we're as a team, doing alright, but I don't think it's really going to sink in until a couple of days at least."

Labuschagne was able to dismiss the dangerous Azhar Ali for 185 with his leg spin, as Ali holed out to Cameron Green.

Mohammad Rizwan and Iftikhar Ahmed batted out the innings, with Pakistan eventually declaring at 4/476 from 162 overs.

Labuschagne credited the Australian bowling attack, despite the large total.

"Our bowlers did a tremendous job at keeping that scoring rate under three [runs per over] for the majority of the two days.

"I think they really held their lines and their lengths. We did really get it reversing, and we got the wicket of Imam, and I think we were terrific. I thought Nathan Lyon did a beautiful job on a wicket that probably didn't give him too much on Day One and Day Two, but hopefully, at the back end of the game we will get some spin."

The declaration came late in the day, as the light was fading. As a result, when Pakistan came out to bowl, Shaheen Shahid Afridi was not permitted to bowl, due to his pace being unsafe in the poor conditions.

Sajid Khan bowled a solitary over of spin to Usman Khawaja before stumps were taken due to the bad light. The early end to play means Afridi will be given an almost-new ball in the morning to bowl at the Australians with.

Australia will resume at 0/5, with Khawaja having scored all the runs, and David Warner yet to score.

Despite the imposing total, Labuschagne believes the Australians are not out of the match yet.

"I think for us, I think it's just about taking it a day at a time," the number three batsman said.

"I think the only way you get yourself back into a game like this is by taking it day by day, over by over, and clawing your way back into the game and seeing where you get to.

"If we bat really well we can potentially turn the game and have something to bowl at on Day Five, but at the moment, it's just going to have to be a ball by ball process."