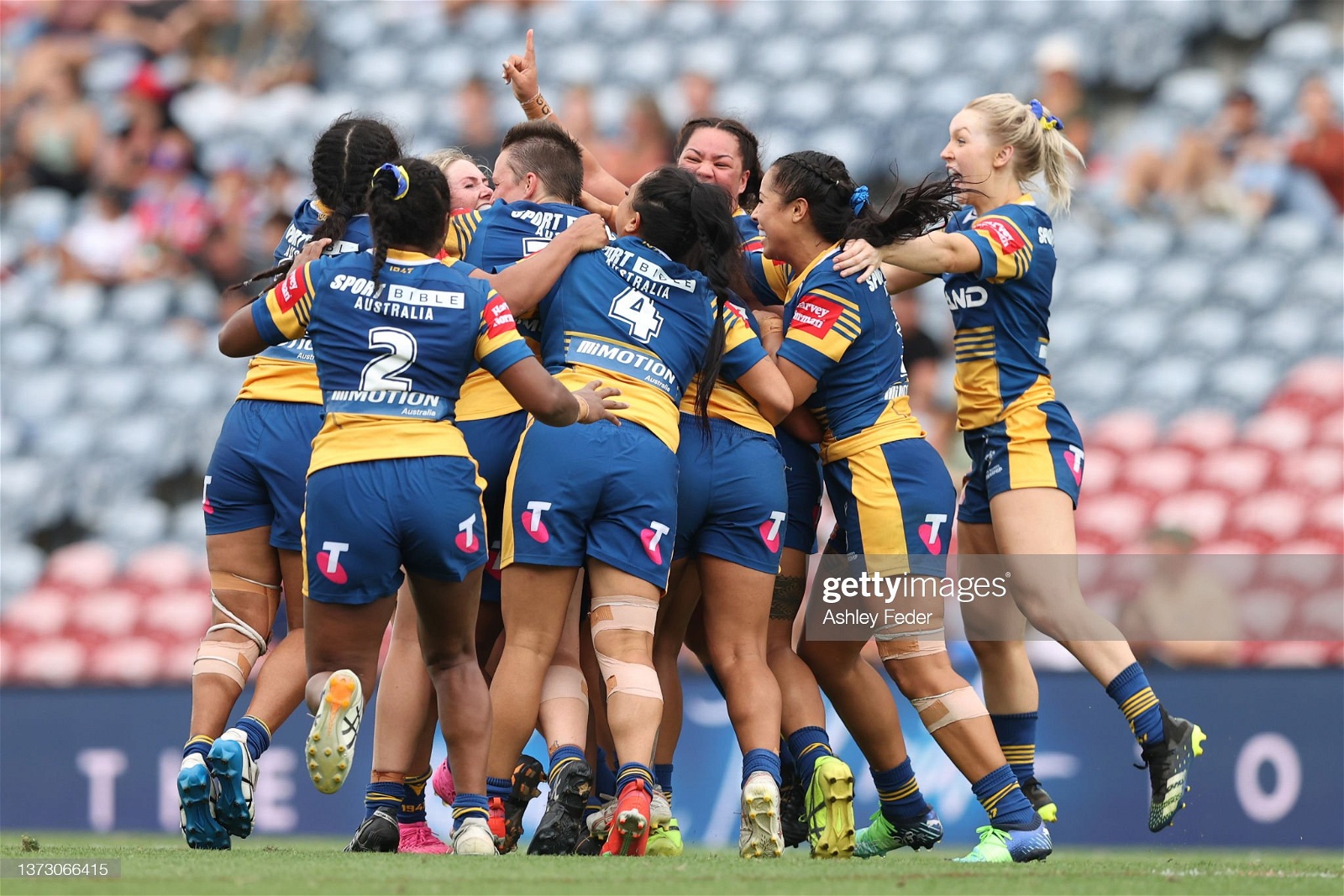 The Parramatta Eels secured its first win in the NRLW with a come-from-behind 13-12 victory over the Newcastle Knights thanks to Maddie Studdon's last-minute field goal.

The Parramatta Eels secured its first win in the NRLW with a come-from-behind 13-12 victory over the Newcastle Knights thanks to Maddie Studdon's last-minute field goal.

In the final minutes of the final game of the day, the Parramatta Eels came from behind for its first win in the club's debut season in the NRLW competition.

The hometown Newcastle Knights team started off strong, with a Romy Teitzel try within the first three minutes of the game.

This margin almost lasted until the end of the first half, however, the Eels levelled the score with a Tiana Penitani try, set up from a Botille Vette-Welsh line break, with Maddie Studdon converting the kick.

10 minutes later, Phoebe Desmond got a line break of her own for the Knights, to give them back the lead again. Simaima Taufa was the final try scorer, to tie the game at 12-12 with the successful conversion by Studdon, with 20 minutes remaining.

In the dying seconds, just as everyone belived the game would go to overtime, Maddie Studdon continued her excellent kicking game, with a last-second field goal, to win the game for Parramatta.

“We put ourselves in positions to win that game so many times and put that game to bed. Full credit to Parramatta, they were a really good side,” Bromilow said.

“There was a few times there that, I don’t know if it was inexperience or lack of confidence, but some players at times came up with poor errors.

“We worked really hard in the preseason with getting numbers into tackles and slowing the play down. We got taught a lesson by a more experienced pack today about how we do that.”

One moment that the Knights will take pleasure in however is a try from local girl Phoebe Desmond with captain Romy Teitzel proud of her performance.

“[Pheobe is] a homegrown talent, and a great showcase for the fans here in Newcastle. Phoebs is a really hard worker and she deserved it”, Teitzel spoke about her teammate's performance.

Bromilow also agreed with the assessment of Desmond's immediate impact and potential within the team.

“She’s a player that from the outset, no-one knew, she came out of the wilderness,” he said.

“A lot of people will be looking at her and the impact she can have off the bench.”

In the other coaches box, Dean Widders was pleased with his team’s performance, and especially the finish.

“I think it was admirable to see our girls hang in there the way they did,” he commented.

“I thought we were really good at times, but we just weren’t clinical enough to really get the job done.

“I’m excited for our young players in our team to get the best lesson they’ve ever got in footy.”

Widders was especially impressed with Maddie Studdon’s composure, especially in those last minutes.

“She’s been practicing, we’ve said for a while games will be won by a field goal in those early rounds,” he mentioned.

“She was set for that three plays before – she was ready for it, in the perfect position.”

With a new team to the comp, there was also plenty of young talent for the Eels, all hoping to build a high calibre team for the future, with captain Simaima Taufa explaining the significant experience that will come from this game.

“The experienced players have a job to do and that’s to nurture these girls coming through and making them feel confident."

For now, Widders and his Eels will be looking on to the future, and for ways to improve each round.

“I think this competition is going to be won by the team that improves the most over the next few weeks and we’re gonna do everything we can to be that team", Widders outlined.