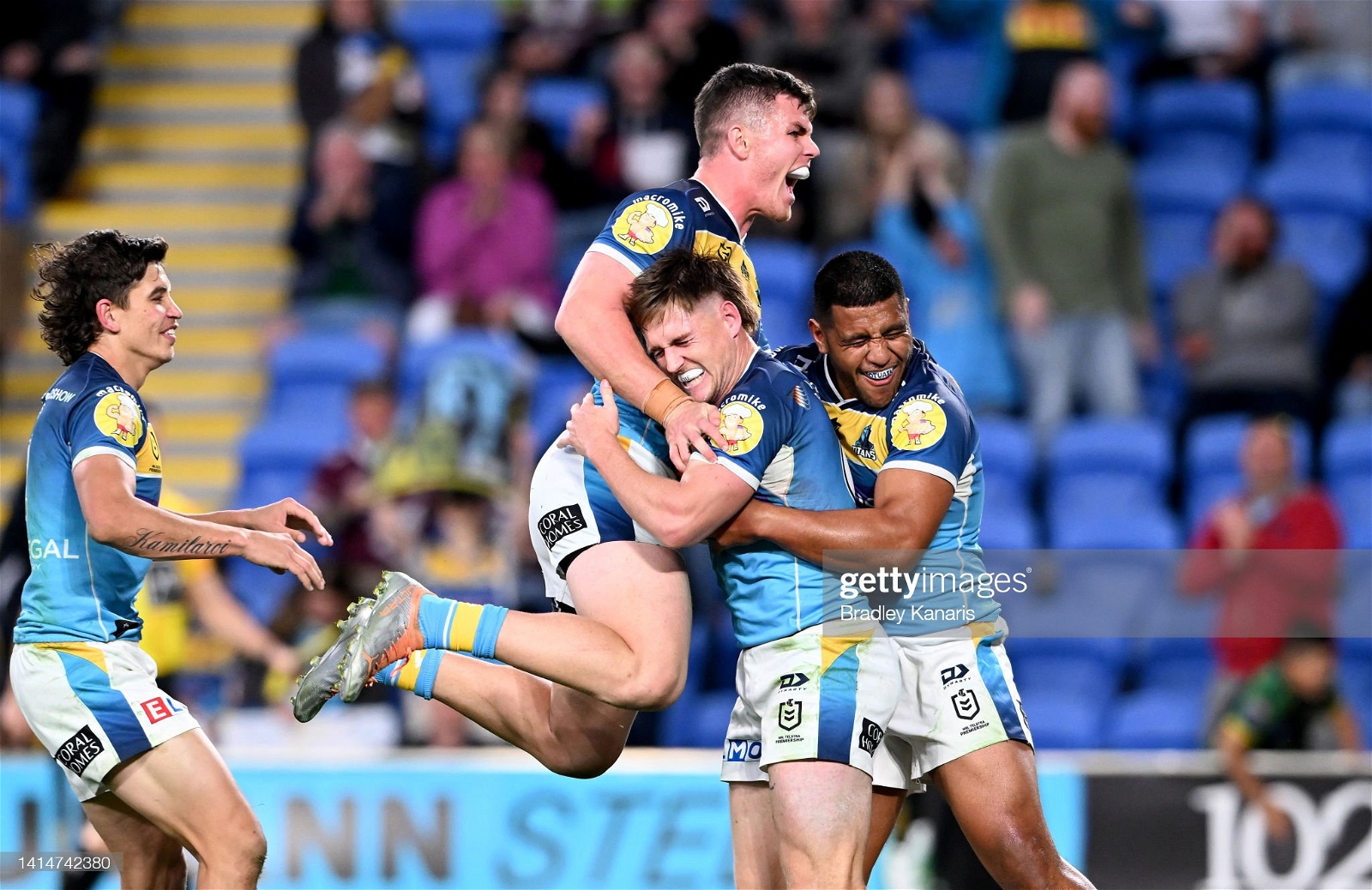 NRL Team of the Week Round 22: Honouring Paul Green

NRL great Paul Green was honoured throughout an emotional Round 22 of the NRL. The Sea Eagles and Dragons have dropped out of the finals race.

NRL Team of the Week Round 22: Honouring Paul Green

NRL great Paul Green was honoured throughout an emotional Round 22 of the NRL. The Sea Eagles and Dragons have dropped out of the finals race.

Continuing his strong run of form, Latrell Mitchell shined for the Rabbitohs this week against the Eels. While not scoring any tries himself, he scored six points from kicking.

His truly impressive stats however, was his three line breaks and 211 run metres. He also set up teammates for two more line breaks of their own.

In a surprising win over the North Queensland Cowboys, the Roosters winger was a standout, producing a try, 15 runs for 160 metres, two line breaks and 59 post contact metres.

With two line breaks and a try assist, the Storm winger proved once again why he is one of the best in the game. Helping push his side to their 16-0 gutsy win over Penrith, Olam ran 168m for 16 runs and made three tackle breaks.

In his team's powerful performance against the Wests Tigers in Tamworth, the long-standing centre remained reliable as always, producing a try, 174 running metres, six tackle breaks, one line break and a line break assist.

With the most line breaks (three) in the game, the Broncos winger once again put on a stellar performance in his side's 28-10 win over the Knights. The winger scored a magnificent hat-trick and ran 196m for 16 runs.

In a dominant showing over Manly, AJ Brimson showed up in the halves. With 153 run metres of his own, Brimson connected with the rest of the backs to help them score almost 50 points. Additionally, he made eight tackles and three line breaks.

In what was the signing of the season, Nicholas Hynes has been nothing short of dominant for the Cronulla Sharks. With an 85.71 per cent kicking accuracy and 322 kicking metres, Hynes' boot provided an absolute masterclass. Additionally, he provided 223 run metres, and two tackle breaks. This was Nicho Hynes as his absolute best.

In the Roosters’ 32-18 win over the Cowboys, Jared Waerea-Hargreaves shone. He scored in the 64th minute, equalling his 2012 personal best for number of tries in a season with a total of three. He pushed through the Cowboys’ defence to score directly next to the left goal post.

From his 18 runs, Waerea-Hargreaves racked up 180 running metres, which was the most of anyone in the match. He finished the game with 49 post contact metres, two tackle breaks and one line break.

The Roosters strengthened their hold on eighth place on the ladder with a 32-18 win over the Cowboys. Though his running metres were impressively low at just 49, Sam Verrills was among their best.

Verrills ran from dummy half in a scrum 10 metres from the Cowboys’ line, whizzing past the defence to score his first try in the 52nd minute. His second try came in the 67th minute thanks to a similar close-range dummy half run off a play the ball.

Verrills finished the game with four dummy half runs, one try assist, two tackle breaks and two line breaks. He also made 35 tackles during the match with 92 per cent tackle efficiency.

The Broncos galloped back above the Eels into sixth on the competition ladder thanks to a 28-10 win over the Knights. Payne Haas was one of the Broncos’ many strong performers in front of more than 25,000 fans in the Saturday night game.

Haas racked up 84 running metres from 17 runs, as well as 83 post contact metres, which was the most of anyone in the match. He also had 17 hits ups and made 43 tackles with nearly 98% tackle efficiency.

The Titans pulled out a performance that their fans have been hoping for all season, securing a resounding 44-24 victory over the Sea Eagles. David Fifita was instrumental in sinking Manly’s finals hopes.

Fifita trampled the defence in the 56th minute, proceeding to run for more than 50 metres and throw a dummy before scoring a try. He racked up 167 running metres from 13 runs, eight tackle breaks and five offloads. His defence was also strong, with nearly 95% tackle efficiency.

The Rabbitohs climbed to fifth on the ladder thanks to a stunning 26-0 performance against the Eels. Playing for the full 80 minutes, Keaon Koloamatangi was strong in both attack and defence, racking up 76 post contact metres and 31 tackles. He also ran for 172 metres from 17 runs.

Though Koloamatangi didn’t score a try himself, he produced a no-look bat-on pass in the 12th minute which resulted in Izaac Thompson scoring in the right corner.

With another Souths player in the Team of the Week, Cam Murray rounds out our side. With 42 tackles, Murray played his role as part of Souths' defensive efforts, holding the Eels to zero points.

He also made 189 run metres and set up two line breaks for teammates. Murray has been a regular star for the Rabbitohs, and deserves his place in this side.