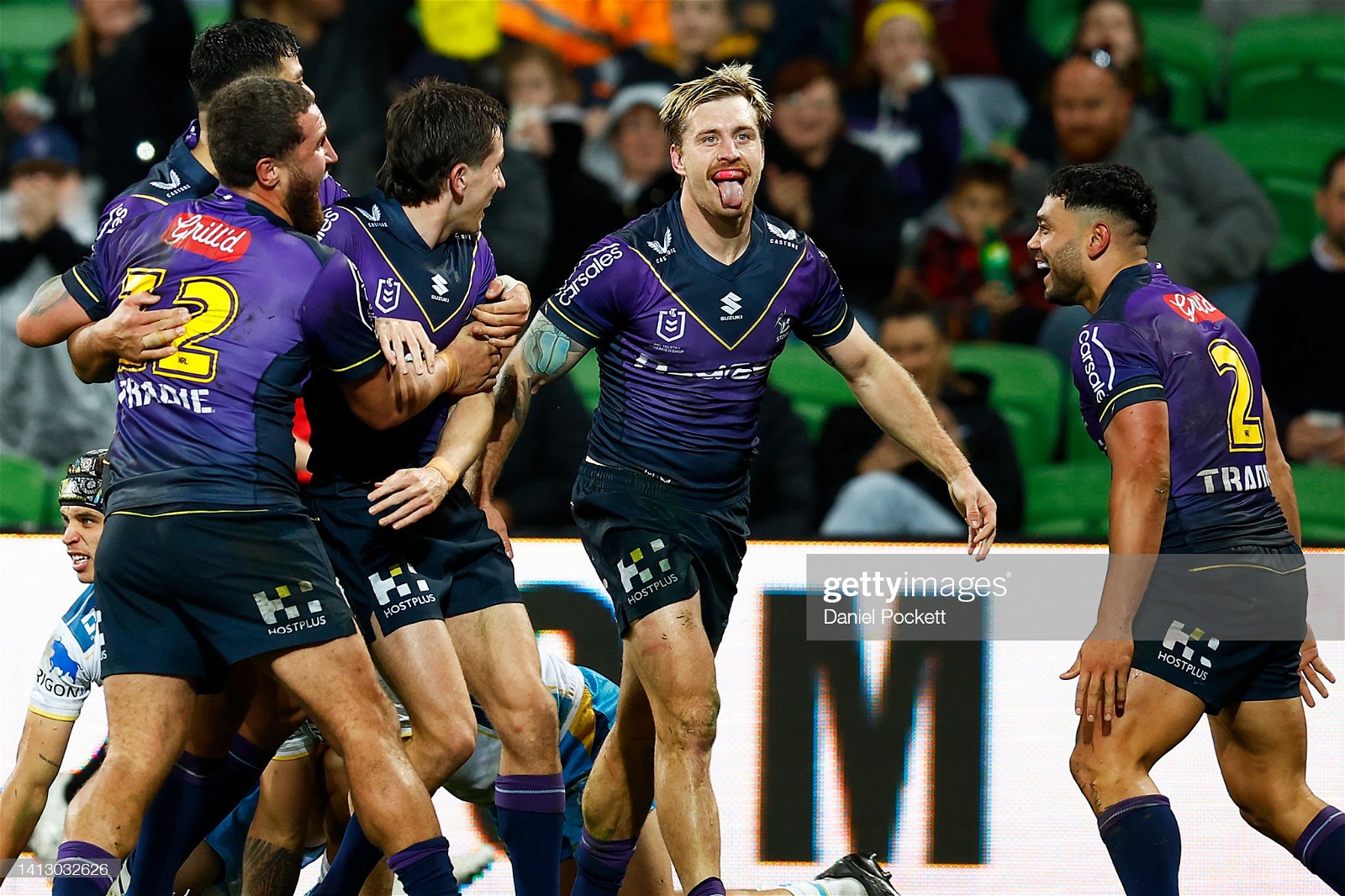 NRL Team of the Week Round 21: Top Eight Dominance

In Round 21 of the NRL, seven of the top eight teams secured wins, with the Panthers heading towards the Minor Premiership. Bundaberg also hosted its first NRL game.

NRL Team of the Week Round 21: Top Eight Dominance

In Round 21 of the NRL, seven of the top eight teams secured wins, with the Panthers heading towards the Minor Premiership. Bundaberg also hosted its first NRL game.

The Melbourne Storm had to reshuffle their team this week with players out due to injury, but they managed to secure a 32-14 win over the Gold Coast Titans. Playing out of position at fullback instead of five-eighth, Cameron Munster stole the show.

Thanks to the boot of Jarome Hughes, Munster got his first try in the 15th minute. Munster soared above the Titans defenders to catch the ball, twist, and score between the posts.

Munster tricked the defence with a dummy pass to secure a line break, which resulted in him scoring his second try in the 32nd minute. He found another defensive gap in the 63rd minute and was able to capitalise on it to score thanks to another dummy pass.

Cameron Munster finished the game with the most running metres of any player, with a total of 252 metres from 19 runs. He racked up an impressive two offloads, 97 post contact metres, two line breaks and nine tackle breaks, all of which contributed to many of the Storms' points.

With Ryan Papenhuyzen and Nick Meaney both unavailable, Munster was in charge of the goal-kicking duties, securing four conversions from his six attempts.

With two tries in the first ten minutes of the match, Maika Sivo started the Eels night off on the right foot.

With a linebreak and two tries, Sivo's actions put the Eels up 8-0 in the blink of an eye. Coming off this strong start, Manly spent most of the first half trying to fight their way back into contention, and struggled.

Another week, another Panther in the Team of the Week.

With Nathan Clearly serving the first game of his suspension, Penrith needed other players to step up, particularly in the kicking game.

Going four from four in conversions, and making an additional penalty goal - alongside a try of his own -, Crichton was responsible for many of the Panthers points this round.

While a low scoring game, Dane Gagai still found chances to run against the Tigers' defending.

With over 200 metres in running, and 14 tackle breaks, Gagai forced the Tigers to focus on their defence. While he struggled to find form in his last seasons with Souths, Gagai has shown he still has what it takes to have NRL success.

After leading the NRL in tries for two straight years, Alex Johnston made strong efforts this round for a third.

With two line breaks, and a try, Johnston continued showing up to be one of the strongest parts of the South Sydney attack.

Having gone into the sheds at half time tied at 14-all, the Eels pulled off a 36-20 win over the Sea Eagles in a crucial game for both sides in their bid for the finals. With Mitchell Moses out due to injury, five-eighth Dylan Brown delivered a strong performance alongside rookie halfback Jake Arthur.

Dylan Brown sealed the Eels’ win in the 71st minute win a line break in the middle of the field and a 50-metre run for the line, which resulted in his 8th try of the season.

Brown finished the game with 179 running metres from 11 runs and three tackle breaks. He was equally as on-point in defence, with a phenomenal 39 tackles with a tackle efficiency of nearly 91 per cent.

The Sharks beat the Dragons 24-18 in a thriller on Saturday. Nicho Hynes was equally as instrumental as he was in the Sharks’ golden point win over the Rabbitohs last week.

Hynes opened the scoring in just the 2nd minute, with a dummy pass and a left foot step getting him across the line.

He racked up 146 running metres from 14 runs, five tackle breaks and 47 post-contact metres, as well as one coveted one-on-one steal. He also secured four from four conversion attempts, with each of these points proving crucial in the close match.

In the first ever game hosted in Bundaberg, the Cowboys won against the Bulldogs, 28-14. Prop Reuben Cotter played a great game, assisting his team to victory.

With 182 run metres up his belt, he fought strong and hard. This can be seen with his 15 hit ups, the highest of the night.

Cotter proved his position in this week’s Team of the Week, with a 92.31 per cent tackle efficiency. His defences gave the Cowboys the upper hand, with 56 per cent overall possession allowing them to take the win.

The South Sydney Rabbitohs controlled the field this week, winning 48-10 against the New Zealand Warriors. Clear fan favourite Damien Cook played an excellent game, with a try and some great assists.

After a strong run and pass by captain Cameron Murray, Cook scored an incredible try – running down the field, doing a swift step to avoid being tackled, before getting the ball down, scoring the second try of the night. He showed his strength as a team player, running with Murray down the field.

Cook had two line break assists and a great try assist, proving his position in this week’s Team of the Week.

Parramatta Eels prop Reagan Campbell-Gillard played a strong game, with 203 run metres in just 54 minutes on the field. He had a couple of strong tackle breaks, and a whopping 18 hit ups. Campbell-Gillard is a great, consistent, team player, and his performance this week proved that.

Campbell-Gillard is a great defensive player, with a 94.74 per cent tackle efficiency, with just one ineffective tackle for the night. His efforts helped his team, with the Eels coming away with a higher possession percentage, completion rate, and defensive tackle percentage.

Koloamatangi had a great game, scoring a try of his own against the Warriors, assisting in the Rabbitohs' field domination. 21 minutes in, from a quick pass from Lachlan Ilias, Koloamatangi stepped through a tackle, scoring a try. He proved his defensive determination this week, with a 92 per cent tackle efficiency.

Despite making a small error, Koloamatangi played a great game this week.

Second Rower Angus Crichton played a solid game this week, with the Roosters winning 34-16 over the Broncos. Crichton racked up 158 run metres, and had an impressive 93.33 per cent tackle efficiency.

Scoring a try in the 15th minute, Crichton upped the Roosters lead. He put up a great fight, pushing his way through an attempted tackle, to score the third try of the night.

Crichton’s great defence assisted in the Roosters higher overall effective defensive tackle percentage, with 84.86 per cent, compared to 81.94 per cent for the Broncos. Crichton proves himself again, and again, to be a strong player, which is why he’s in this week’s Team of the Week.

The Rabbitohs bounced back after their golden point loss to the Sharks last week. Captain Cameron Murray put on a masterclass to lead his side to a thumping 48-10 win over the Warriors on the Sunshine Coast.

Murray had a hand in the first try of the match, with his pass sending Lachlan Illias in to score between the posts in the 3rd minute. Murray produced a dummy pass and a line break just six minutes later. After gaining 20 metres he passed it to support runner Damien Cook, who went in to score. Cameron Murray secured his third try assist and the third try of the match in the 16th minute, taking on the line and passing short to Tevita Tatola.

Murray’s attack was on-song throughout his 66 playing minutes, with 187 running metres from 19 runs, 13 hit ups and four tackle breaks. He consistently tricked the defence, racking up three offloads, one line break and two line break assists. This attacking prowess didn’t come at the cost of his defence as he made 35 tackles, with his tackle efficiency exceeding 97 per cent.