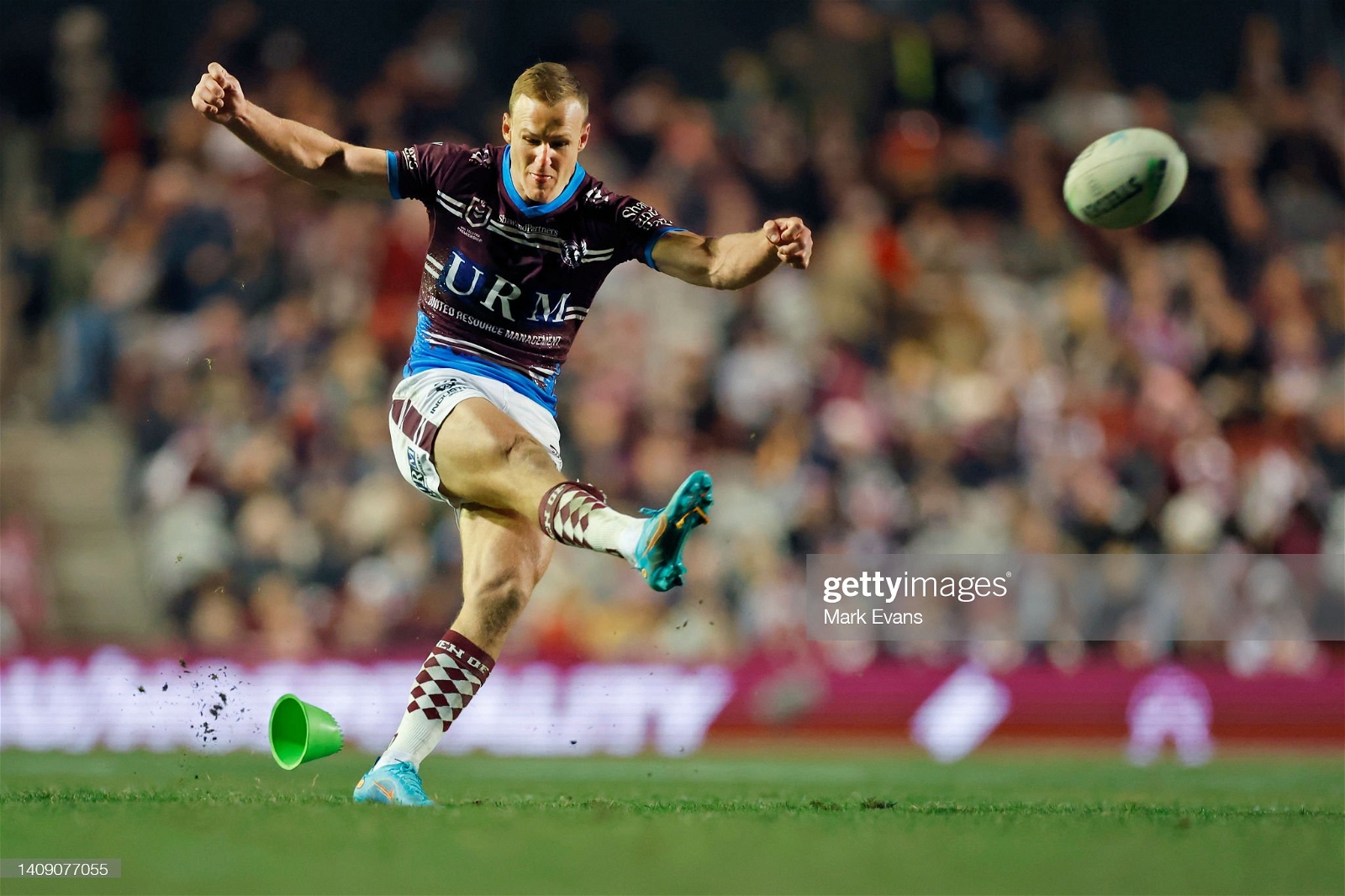 NRL Team of the Week Round 18: Finals Battle Heats

Four Origin stars made it to our Round 18 NRL Team of the Week. The teams who are battling it out to make the finals proved that they are strong contenders, with some stand-out performers in the mix.

NRL Team of the Week Round 18: Finals Battle Heats

Four Origin stars made it to our Round 18 NRL Team of the Week. The teams who are battling it out to make the finals proved that they are strong contenders, with some stand-out performers in the mix.

Thanks to a late siege, the Roosters beat the Dragons 54-26 at Central Coast Stadium on Saturday. James Tedesco backed up after representing New South Wales in their State of Origin loss last Wednesday.

Joseph Manu sent Angus Crichton through a hole, and Crichton passed an inside ball to Tedesco for his first try of the match in the 57th minute. In the 78th minute, Tedesco was first receiver just over 10 metres from the Roosters’ try line. He sold a dummy pass to the defence to barge through, roll over and score the match’s final try.

He finished the game with 191 running metres from 17 runs and ten tackle breaks, both of which were only eclipsed by other Roosters players who are also on this list.

What a week it was for Alex Johnston! The third hat trick of his career led him to take his place as South’s all-time leading try scorer.

The scores were locked at 28 against the Bulldogs leading into the game’s dying minutes. It was here that Johnston linked up with teammate Latrell Mitchell for the breakthrough. Two tries in two minutes put Johnston in the record books and brought him closer to the top 10 all-time.

Jesse Raimien made his mark on the game almost immediately. After the Cowboys gave away a penalty, Ramien put his team on the board within the game's first four minutes.

A dummy half run, and he had his second try in the first half. He finished the game with two tries and ten tackle breaks.

In this round, the Panthers overcame the challenge of winning without their star players. Izak Tago was one of those to rise to the challenge. With 140 run metres, Tago found himself two linebreaks and also found himself on the other end of an excellent assist from Villame Kikau for the Panther's first try of the game.

Tago proved that the Panther's system could still find success, even without their usual Origin stars.

Knights defenders were no match for Jason Saab. After a breakout season in 2021, Saab has continued to play his part as part of Manly’s star-studded back line. While he has been held quiet the last few games, Saab finally found his form from last year.

Against Newcastle, Saab ran for 223 metres and got 3 line breaks. For his efforts, he also scored twice.

In the Roosters’ 54-26 thrashing of the Dragons, Joseph Manu proved that he is the man to fill in for his team’s injured five-eighth. Usually a centre, the 2022 season has seen Manu show off his versatility, playing at fullback for James Tedesco and now five-eighth for Luke Keary.

Manu went for a dummy half run in the 19th minute, tricking the defence to get the ball down despite a multi-man Dragons defensive effort. He scored his second in the 52nd minute in a similar fashion, picking up the ball off the play the ball and getting down low to burrow through the defence.

Trickster that he is, Joseph Manu picked up a Connor Watson offload that went to ground and came to a standstill grasping his knee. After seemingly faking an injury, he charged through the unsuspecting and unprepared Dragons players and grubbered into the in-goal to set up a try for Paul Momirovski. He also flick passed to Victor Radley to set him up to score the game's first try.

He racked up 52 post-contact metres and 15 tackle breaks, both of which were the most of anyone in the match. He also finished the game with 194 running metres from 16 runs.

The Sea Eagles had a 42-12 victory over the Knights, and unlike the last couple of weeks, they didn’t leak points late in the game. Daly Cherry Evans backed up after captaining Queensland to an Origin series victory last Wednesday.

DCE produced 16 kicks that covered 522 metres. His passing was equally as strong, with a long pass to teenage rookie Tolutau Koula sending him in for the match's first try. He sent Jason Saab in for a try in the 49th minute after passing the ball to the short side, receiving it again and flicking it in the other direction into Saab’s waiting hands. His third try assist came in the 67th minute after he chipped into the corner for Christian Tuipulotu to score.

Cherry Evans did most of the Sea Eagles’ goal-kicking with six out of his seven attempts at goal raising the flags. Reuban Garrick then converted the match's final try after DCE got an early mark with less than seven minutes to go.

Penrith Panthers came away with a tight 18-16 win over the West Tigers this week, with prop James Fisher-Harris playing a strong team game.

Fisher-Harris scored a great try in the 73rd minute, solidifying the Panther's win this week. Penrith Panthers hold a strong lead in the ladder this year, and their game this week has given them an 8-point lead, giving them an excellent chance to stay at the top.

With 164 run metres and an 86% tackle efficiency, Fisher-Harris put up a strong fight, playing a great team game. He had a solid line break, proving his position in this week’s Team of the Week.

Coming off the back of an Origin win, Harry Grant had a great game this week against the Canberra Raiders. Despite losing 20-16, Melbourne Storm put up a great fight, and hooker Grant proved his position in this week’s Team of the Week.

Grant had some solid tackles and tackle breaks, with his efforts contributing to a higher possession, completion rate and defence for the Storm this week. After a Storm set restart, he had a fantastic try in the 59th minute from dummy half. Despite getting a couple of penalties, Grant played a stellar game this week.

Joseph Tapine has once again found himself in our Team of the Week, playing a fantastic game against the Melbourne Storm. He racked up 171 run metres this week, which was an incredible effort.

With three tackle breaks and an excellent dummy half run, Tapine played a strong team game. Despite a couple of errors, Tapine proves to be an incredibly consistent, reliable player, which is why he is, yet again, in our Team of the Week.

He had 94% tackle efficiency, proving his position in this week’s Team of the Week.

Scoring a try in the 53rd minute, Papali’i had a great game this week against the Warriors. Fighting against 3 Warriors players, Papali’i managed to get the ball over the line, scoring the first try of the second half.

He also played a strong team game, with a line break assisting his team and some great defensive tackles, racking up a 92% tackle efficiency.

Another Rooster has made it to our Team of the Week thanks to their stunning 54-26 win over the Dragons. This win propels the Roosters above the Dragons into 9th place on the competition ladder, with the Dragons falling to 11th place.

Joseph Manu fended off a one-on-one tackle attempt from the Dragons and produced a flick pass for Victor Radley. Radley then raced through a gaping hole in the defence to score between the posts in the 12th minute.

Despite playing at lock, a position which isn’t as well-known as some for running metres, Radley ran for 213 metres from 24 runs, the most of anyone in the match. Off the back of this, he also picked up 45 post-contact metres and had 16 hit-ups.

Radley was equally as busy in defence as he was in attack, successfully making 31 tackles with nearly 97% tackle efficiency.