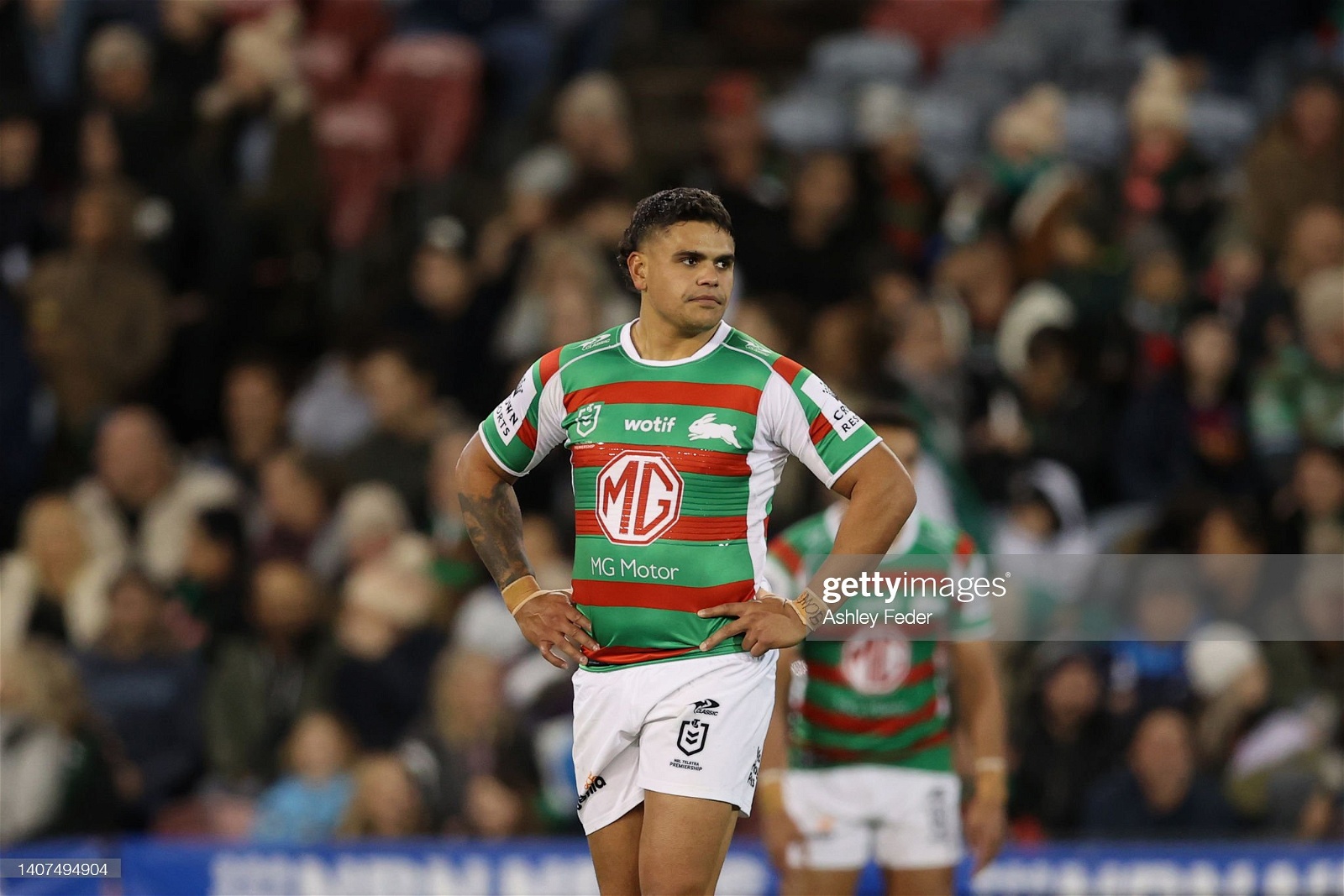 NRL Round 17 Team of the Week: All Eyes Are On Origin

With teams having byes and stars away for Origin, there was more attention put onto the eight teams in action this round.

NRL Round 17 Team of the Week: All Eyes Are On Origin

With teams having byes and stars away for Origin, there was more attention put onto the eight teams in action this round.

South Sydney had a stellar game against the Newcastle Knights this week, coming away with a 40-28 victory. The Rabbitohs have retained their position on the ladder, sitting comfortably in 7th. New team captain Latrell Mitchell played a great game, and despite his hamstring injury early in the season, he has bounced back and is now playing some of his best games yet in the Rabbitohs jersey.

Scoring 5 out of 7 conversions and a penalty goal in the 80th minute, Mitchell proved his worthiness as new team captain, scoring 12 points for his team. He had a couple of sweet line breaks and try assists, demonstrating his incredible ability to work with his team.

The Eels came back from behind to beat the Tigers 28-20, putting them in range of the top four on the NRL ladder. It was the Eels’ first victory at Leichardt Oval in 21 years. Maika Sivo put in a strong performance in his fourth game of 2022, having been injured throughout the early part of the season.

Maika Sivo caught a long ball from Mitchell Moses to go in for a try in the corner in the 37th minute. He also chipped a kick in-field with only seconds until halftime, setting up hooker Reed Mahoney, who dived on the loose ball to score crucial points for the Eels.

Ten of the Broncos’ top players were out due to State of Origin and injuries, but they managed to beat the Dragons 32-18 on Sunday in front of more than 29,000 fans. Kotoni Staggs was one of the stars of the show, having not been selected to represent New South Wales again since his debut in Origin 1 this year.

In the 36th minute, Staggs showed the ball to his winger before stepping into the defence, with momentum propelling him across the line for his first try. Jordan Pereira kicked in-field, and the ball bounced perfectly for Kotoni Staggs to reach skyward, clutch the ball and score his second try in the 59th minute.

Despite being down players due to COVID-19 and State of Origin, the Sharks won 28-6 in a rare back-to-back loss for the Storm. Jesse Ramien hammered the Storm’s left edge, producing 12 of the Sharks’ points.

Off the back of a quick play, the ball followed by slick hands from Braydon Trindall, Jesse Ramien scored his first try untouched in the 11th minute.

In the 37th minute, off a pass from Ramien himself, Sione Katoa produced a grubber in-field, and Jeese Ramien won the chase for the ball, planting it over the line for his second.

Thanks to another Braydon Trindall pass, Ramien pushed and twisted through the Storm’s left edge defence to secure his first hat trick of the season in the 74th minute.

Delouise Hoeter replaced Corey Oates on the wing after Oates was called into Queensland’s COVID-19 stricken State of Origin camp on Friday. In just his ninth NRL appearance, seven of which he played for the Tigers in 2015, the 28-year-old scored his first and second NRL try.

Off the back of a mid-tackle offload from Brenko Lee, Hoeter went in to score in the corner, merely a minute after the Dragons’ Tariq Sims was sin-binned for a late Tackle on Adam Renolds.

Quick hands from Brenko Lee sent Hoeter in for his second try in the 49th minute, with the Dragons’ edge defence backing away and unable to make the tackle.

Walker played a strong game this week from the very start, putting the Rabbitohs ahead in the first 10 minutes. Walker’s quick try in the 9th minute, despite some deliberation, was thanks to him always being an alert and agile player.

His second try, 38 minutes in, was, again, one that demonstrates why he’s such a strong player, with a significant intercept and run down the field to put the Rabbitohs further ahead for halftime.

Walker’s strong instincts showed in his try assist for Richard Kennar in the 33rd minute, with a quick kick passing through to his teammate to score. With a further 2 try assists and a decisive line-break assists, Walker clearly earned his spot in this week’s Team of the Week.

Broncos star Adam Reynolds had a good game this week, with a 32-18 win over the Dragons. After suffering from a rib injury a few weeks ago, he has had some rocky games, but his performance this week demonstrates he’s on the mend.

Reynolds made some great tackles and passes, playing a strong team-oriented game this week. Despite only scoring four out of 6 conversions for the night, he played a strong game, bouncing back after injury and proving his spot in this week’s Team of the Week.

Souths came into round 17 without any of their usual stars up front. With Cook, Arrow and Murray all preparing for Origin, they needed other players to step up and stop them from dropping down the ladder. They found this in Tom Burgess.

Though he started on the interchange bench, Burgess came into the game early on and remained on the field for almost the entire time. With 17 hit-ups and four tackle-breaks, Burgess challenged the Newcastle defence to stop him. While his teammates score the tries, his 34 tackles and 200 run metres show how he was a key workhorse for them.

Cronulla provided what was easily the upset of the week as they gave the Storm a second loss in as many rounds. Once again, Blayke Brailey was one of the key performers of this match.

Brailey made 120 passes during the match, a key playmaker for a side that made seven line breaks. Brailey also proved his worth on the other side of the ball, with his 39 tackles helping to tame one of the best scoring teams in the league.

While his team might prefer to forget their performance this round, Nelson Asofa-Solomona still made his mark. Taking on top four opposition without Cameron Munster was always going to be a challenge, but Asofa-Solomona did what he could.

For a team that struggled to gain metres, Asofa-Solomona was one of the few that had some success. He made 130 run metres, the most of his team, and broke three tackles. He also had a 95.65% tackle efficiency, attempting to slow down the Sharks’ stars.

After a couple of quieter weeks from Papali’i, he was back to starring for the Paramatta Eels in round 17. While he may be joining them next season, Papali’i showed that this week his focus was still beating them.

With 154 run metres, including 77 post-contact, Papali’i’s brute force powered past Tigers defenders. He also proved effective on defence, with a 100% tackle efficiency.

While Tigers fans may be unhappy with him this week, they should be excited to see what he can do in their colours in 2023.

Zac Hosking proved himself ready for the NRL in his very first game. With his 154 run metres, Hosking joins a long list of Broncos forwards who can overpower and outrun the other side.

At 25, the Broncos will be hoping for many more performances like this as this new generation of Broncos stars makes their mark on the NRL.

This week, Cronulla Sharks had a fantastic game smashing Melbourne Storm 28-6. Lock forward Dale Finucane played an excellent game, with an 85% tackle efficiency sealing the deal. His strong defence put the Sharks just ahead in total tackle effectiveness, with a .11% difference. Finucane’s efforts gave the Sharks a head up, with 51% of total possession.

Finucane had some great tackle breaks and passes, proving himself to be a strong team player.