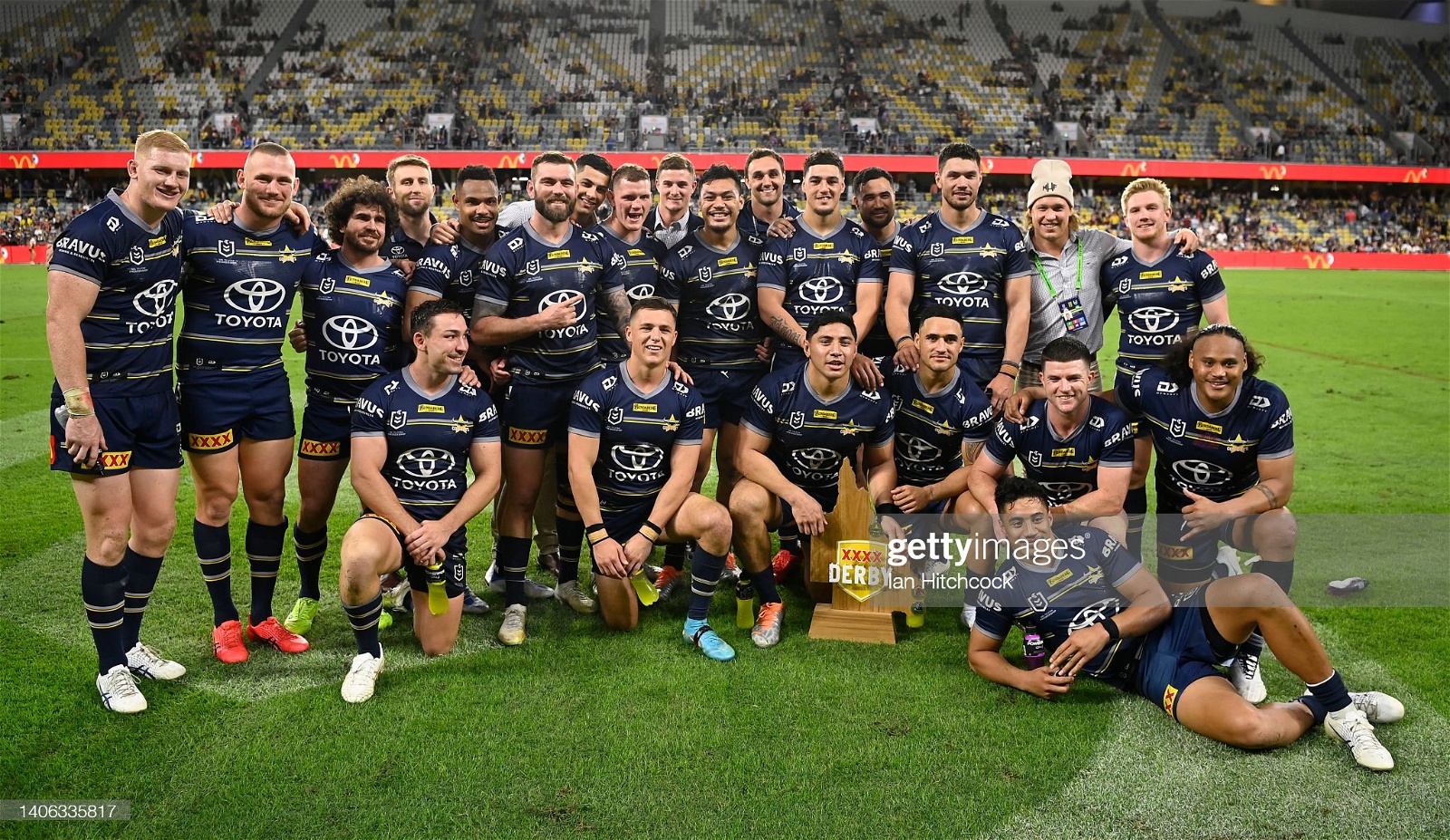 NRL Team of the Week Round 16: Beanies and a Homecoming

The North Queensland Cowboys dominate the Round 16 NRL Team of the Week in a week of Beanies for Brain Cancer, torrential rain and a Warriors homecoming.

NRL Team of the Week Round 16: Beanies and a Homecoming

The North Queensland Cowboys dominate the Round 16 NRL Team of the Week in a week of Beanies for Brain Cancer, torrential rain and a Warriors homecoming.

By  Jess Laven and Lauren McNamara

Queenslanders will be disappointed that Scott Drinkwater is from New South Wales, given the quality of his recent performances. He racked up two try assists in the Cowboys’ 40-26 win over the Broncos.

A long pass that sailed over the heads of the Broncos players landed perfectly in the hands of Kyle Feldt, sending him in to score in the corner in the 47th minute.

Drinkwater helped to extend the Cowboys’ lead with 15 minutes to go in the game, sending Jeremiah Nanai over the line. Drinkwater finished the game with five tackle breaks and one line break.

Taulagi played a strong game this week in the Queensland derby, scoring two tries and having a solid supporting role for his teammates. With an incredible intercept in the first 10 minutes, Taulagi scored the night’s first try for North Queensland, matching their score with the Broncos, bringing excitement to the game.

He had a great line break, and a decisive line break assist, and his cooperation with his squad demonstrated why he was such a strong team player this week. Taulagi finished with another try in the game’s last minutes, putting the Cowboys further ahead and securing their win.

Despite a tough loss against the Panthers this week, Roosters player Joseph Manu had a great game. Having 160 run metres, with a line break assist and a try assist, Manu played a strong team game. His 84.2% tackle efficiency gave the Rooster the upper hand, with a 0.9% higher overall tackle efficiency than the Panthers.

Despite making a couple of errors, Manu had a strong game overall, assisting in the Rooster’s fight for the top 8.

Valentine Holmes played, yet again, a solid game of footy on Saturday night. Nailing every conversion and penalty goal, a total of 16 points for his team, Holmes dominated the game. Having 144 run metres, Holmes proved himself to be a strong attacking player, with two tackle breaks and four dummy-half runs demonstrating his strength.

With a successful Captain’s Challenge in the 30th minute, Holmes nailed the penalty shot, upping the Cowboy’s score by 2 to put them back in the lead.

Winger Edrick Lee played one of the most decisive games in his career this week. Scoring 5 tries for the Knights, Lee dominated the field, securing a 38-12 win over the Gold Coast Titans. With the most line breaks of his team and 177 run metres, Lee played an incredible game. Despite only making a few, his tackling was fantastic, with 100% efficiency for his team.

Lee heavily assisted in the Knights’ domination on the field, with 59% of the possession and an 82% completion rate. His strong attack this week landed him a much-deserved position in our Team of the Week.

Up against his old club, Dearden had to prove his worth after being dropped last season, and North Queensland coach Todd Payten had great faith in him despite the high-risk purchase of signing him on for the Cowboys.

Dearden played a notable position in rushing the Cowboys to the top end of the ladder, with an 83.3% tackle efficiency assisting in the team’s defence. Despite the hard season Dearden has played, Dearden proved his worth, considerably so, as he is now in Queensland’s Origin team at only 21 years old.

Daly Cherry Evans was at his best in the Sea Eagles’ win against the Storm, hitting back after Queensland’ssState of Origin loss to New South Wales last week.

His kicking was superb, with numerous bomb kicks and grubbers leading to points for the home side. He got a 40/20 in the 20th minute, which led to issues in the ensuing set of six. Less than three minutes later, in the 23rd minute, DCE sent up a bomb that the Storm allowed to bounce, and Christian Tuipulotu went in to score. He got his second try assist in the 57th minute when he tricked the opposition, passing to the right to send Tolutau Koula across the line for another try.

Cherry Evans’ only downfall was his scratchy goal-kicking as he only managed to get three out of six conversions. Reuben Garrick was hobbling early in the match, so after Garrick’s first unsuccessful conversion attempt, DCE took over the goal-kicking duties.

Even though the Raiders couldn’t snatch a last-minute try to clench victory and instead went down to the Dragons 12-10 in the pouring rain, Joseph Tapine’s match statistics show the enormity of his contribution. He ran for 156 metres and racked up 70 post-contact metres.

The Dragons found him hard to contain, and by the end of the game, he had managed to secure one line break, five tackle breaks, 17 hit-ups and one offload.

Reece Robson was integral to the North Queensland Cowboys’ 40-26 win in the derby against the Broncos on Saturday. Robson sent Griffin Neame in for his second NRL try early in the second half with a short ball straight in front of the posts. He caught the Broncos’ defence off guard with his own try in the 61st minute, scoring straight off the back of the scrum.

He had a hand in a lot of the Cowboys’ success, racking up 90 receipts and 62 dummy-half running metres by the game’s end. Not only was his attack on song, but his defence was also outstanding. He finished the game with 33 tackles, the most of any of the Cowboys’ players.

The Rabbitohs redeemed themselves after their uninspiring loss against the Dragons in Round 15 with a 30-12 victory over the Eels. Prop Thomas Burgess came in off the bench, with his ruck speed setting up the kickers at the end of the Rabbitohs’ sets.

After 59 minutes on the field, he racked up an impressive 184 metres from 19 runs. Burgess’ strength shone through as he recorded 16 hit-ups and 69 post-contact metres.

Haumole Olakau’atuuhad a strong performance in the Sea Eagles’ somewhat unexpected 36-30 win over the Storm. Olakau’atuuplayed 62 minutes while the Sea Eagles were at their best. He wasn’t on the field when the Storm staged an impressive, albeit futile, comeback in the final 15 minutes of the match.

Olakau’atuuscored a try in the 51st minute, shrugging off and dancing around the defence. He finished the game with 104 metres from 12 runs, two offloads, one line break and nine tackle-breaks.

Jai Arrow played an essential role in the Rabbitohs’ dominant 30-12 performance against the on-and-off Eels. Arrow scored the Rabbitohs’ second try of the match in the 16th minute after Isaiah Tass kept Jaxon Paulo’s kick alive with an offload.

Arrow had two offloads himself during his 69 minutes on the field. His attack held strong after his early try, and he finished the game with 64 post-contact metres, three tackle breaks and 150 running metres.

To top off the night, Arrow’s strong game earned him three Play of the Year points from ABC Radio Grandstand.

Taumalolo had a strong game this week, with a 91% tackle efficiency sealing the deal. Throughout the match, he made 20 tackles, and with 19 successful, his determination was shown. His solid defence aided in the Cowboys having a stronger overall defence over the Broncos, with 82.45% compared to just 80.33%.

He led the way this week with 162 run metres. Despite making an error in the 70th minute, Taumalolo had a great game, solidifying his place in this week’s Team of the week.