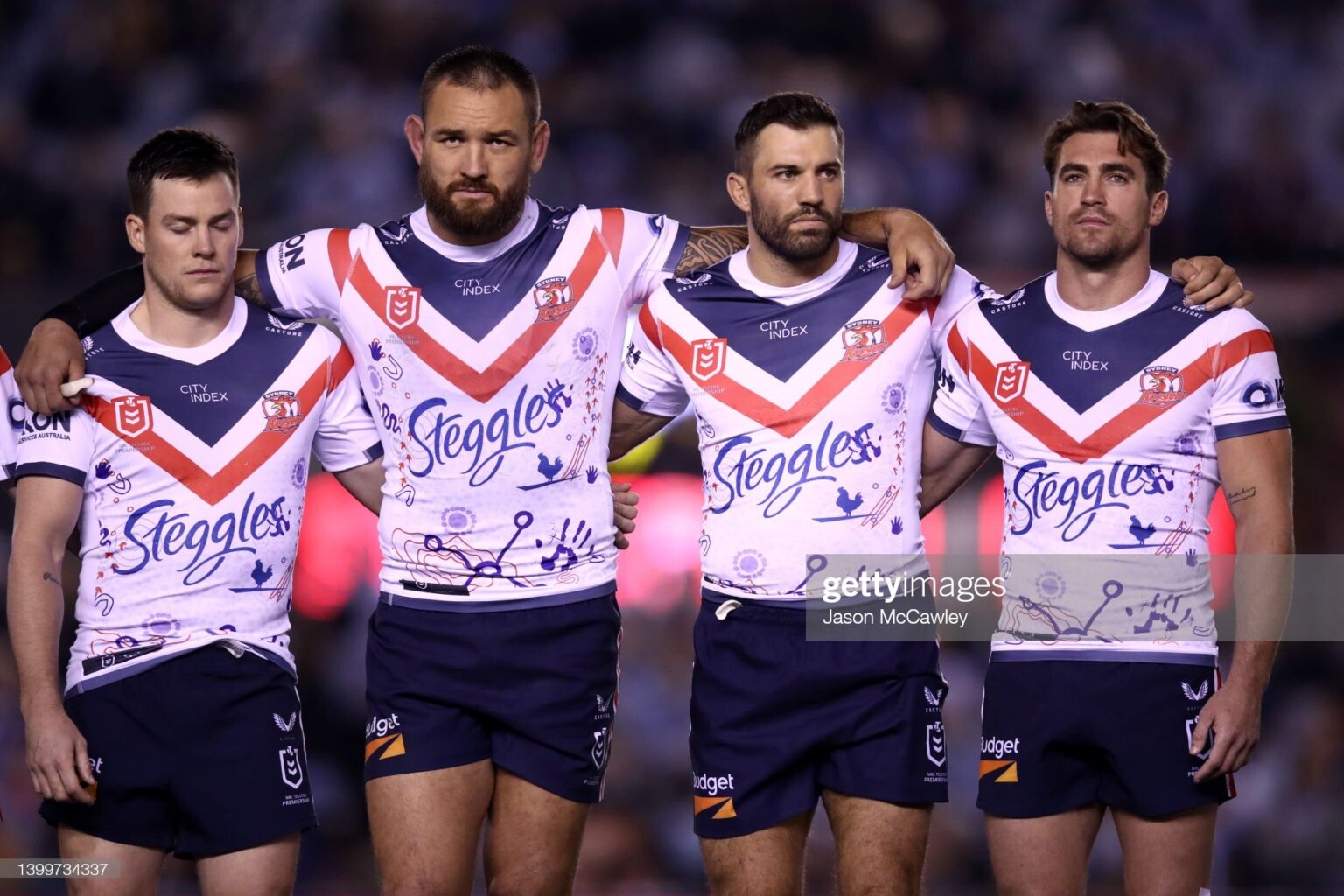 NRL Team of the Week: Are the Cowboys falling away?

Some great football over the weekend parrticualry from the NSW based teams has led to a very Sydney based Team of the Week.

NRL Team of the Week: Are the Cowboys falling away?

Some great football over the weekend parrticualry from the NSW based teams has led to a very Sydney based Team of the Week.

Another good week of the NRL as we head towards Origin.Edge of the Crowdpicks 13 for the team of the week, as the stars step away for camp ahead of Origin I.

A good win for the Roosters this week with them getting over the top of the Sharks on Saturday night, making sure that Scott Morrison’s bad weekends continued with him watching on his Sharks from the sidelines.

James Tedesco was back at his best this week for the Roosters making sure they would get back to their winning ways in what has been an up and down season. Tedesco was on top of almost all the stat lines getting over for a try as well as setting up a couple of assists. He was good with the ball in hand as well making 20 runs for 238 metres to put a big dent in the Sharks' defence.

The Rabbitohs continued their push towards the top eight just scraping in this week after a good win against the Tigers at Accor Stadium on Saturday night. The Tigers got away to an early lead actually leading at halftime but the Bunnies dug in at halftime to blow away the competition and keep the Tigers scoreless in the second half.

Johnston kicked things off for the Bunnies scoring their first try of the match in the 23rdminute as well as a couple more in the second half to continue the grinding into the Tiger's defence. His three tries leave him as the top point scorer for the match as well as picking up three linebreaks to get past the defence of the Tigers which did seem quite weak.

The wins just keep coming for the Broncos with them getting over the top of the Titans by nine points at home on Friday night. You can tell the Broncos are up and about this year just by the attendance numbers there, which reached just under 33,000 people. They now move into the top four after twelve rounds only being one win behind the Storm in second.

At 22 years of age, Farnworth is an up and comer who looks really good and is able to play in plenty of various positions. Farnworth set up a try with a great assist as well as going on 16 runs for a total of 161 metres, 63 of those being post-contact. He looks to be a genuine professional who will make a significant impact on Brisbane for the next decade.

Another young centre that is set to light the competition up over the next decade. He was instrumental alongside a fellow team of the week selection Alex Johnstone in getting the Bunnies over the Tigers on Saturday night.

Graham got across the line once himself while also setting up three of his teammates with assists. He did plenty across attack and defence also running 169 metres, almost half of which was after the first contact. He did give away a penalty that wasn’t required, so he will need to pull his head in slightly.

Daniel Tupou gives plenty of experience to the Roosters and that paid off in spades over the weekend. He has played for both Tonga and Australia at the international level as well as for NSW in the Origin series, at 30 years old, he appears to be just getting better and better.

Tupou got across for the first tries of the match to give the Roosters the early lead which turned into a 20-0 advantage at the halftime siren. Tupou broke through the defence three times with linebreaks and importantly also set up another try for the Roosters. If Sydney is set to get deep into the finals, Tupou will be extremely important to their chances.

The Storm was back to their winning ways over the weekend with a good win over the Sea Eagles all the way back on Thursday. The Storm will no doubt go into the finals as one of the favourites, the only real question is if they can get over the top of the Panthers later in the year.

Cameron Munster continues to show his skills for the Storm, he was the first try scorer of the match getting over the line in the sixth minute as well as another try coming his way in the second half. Munster missed seven tackles so he will need to remedy that, but he did run with the ball 20 times for 149 metres as well as kicking 309 metres to get the Storm moving forwards.

A huge win for the Panthers over the weekend with their skipper Nathan Clearly doing plenty of decent work to keep the Cowboys scoreless on Friday night. It was only a couple of weeks ago when the Cowboys beat the Storm, but they couldn’t even score against the Panthers. Perhaps the Panthers can already look towards the premiership cup at this point.

Cleary didn’t score a try himself, but he was instrumental in setting a couple of as well as covering two of Panther's tries. Cleary was also on the receiving end of the ball plenty of times having 19 runs through the match. He also kicked for a massive 432 metres to keep the ball away from their defensive half.

NRL MAGIC ROUND: TEAM OF THE WEEK

Another Panther in the line-up alongside Nathan Cleary, the experienced Kiwi continued to dominate in his position and played a massive role in the win over the Cowboys.

Fisher-Harris was on the reviving end of the ball 20 times running for a total of 220 metres, 83 of those coming after the first contact. Fisher-Harris will be key if the Panthers are to go all the way once again, he will though need to find a better tackling game after having three ineffective tackles through the match.

It was a good weekend for the Bunnies' biggest fan last week with Anthony Albanese getting over the line and now there are plenty of Bunnies in the team of the week thanks to their win over the Tigers.

Damien Cook was a beast on the defensive end in what was the highest-scoring match of the weekend. He made a total of 40 tackles which is impressive considering the relatively small amount of ball the Tigers had. Cook also broke a match-high seven tackles to brave he can be a beast on both ends.

The Roosters players continue in this line-up thanks to their excellent win over the Sharks away from home. The Roosters are now only one win away from the top four so a couple of more good performances from Jared Waerea-Hargreaves may get them to that important double chance.

Jared Waerea-Hargreaves got across the try line for the first score of the second half, it was inevitable that he would score with him going in 17 runs through the match. He did make two errors in the match, but with this being his 13thseason in the NRL there is no doubt he can clean that up.

Another Rooster in this team after a dominant performance over the weekend. Crichton might be the centre of some current contract speculation but that doesn’t mean he didn’t put in a great performance to get the Sydney based side the win.

He didn’t break any records over the weekend, and only led in the offload’s stat having four of those but it was his overall game that made a difference. The Roosters will be hoping the 26-year-old can seal a new deal and according to reports that is what Crichton is after as well, that news should only be a week or so away.

It was an interesting make for the Knights over the weekend, they got off to a slow start but came back well and part of that was done to Frizell. The Knights got over the Warriors by eight points in their 24-16 win at the Moreton Daily Stadium.

Frizell got across the line for the first try from the Knights, which try came as a result of 47 post-contact metres. He was also important on the defensive end laying a match-high 42 tackles, he needs to clean up his game slightly though after committing two errors.

The final member of this team of the week is a stalwart of the side and more importantly a key part of the Premiership favourite Penrith Panthers. He was key on the defensive end to keep the Cowboys scoreless.

Yeo got across for a single try as a result of his only linebreaks of the match. He struggled on the defensive end with two ineffectual tackles, although his all-around game was vital to the win. With the Origin rounds coming up it will be interesting to see how the many selections affect the Panthers line up.