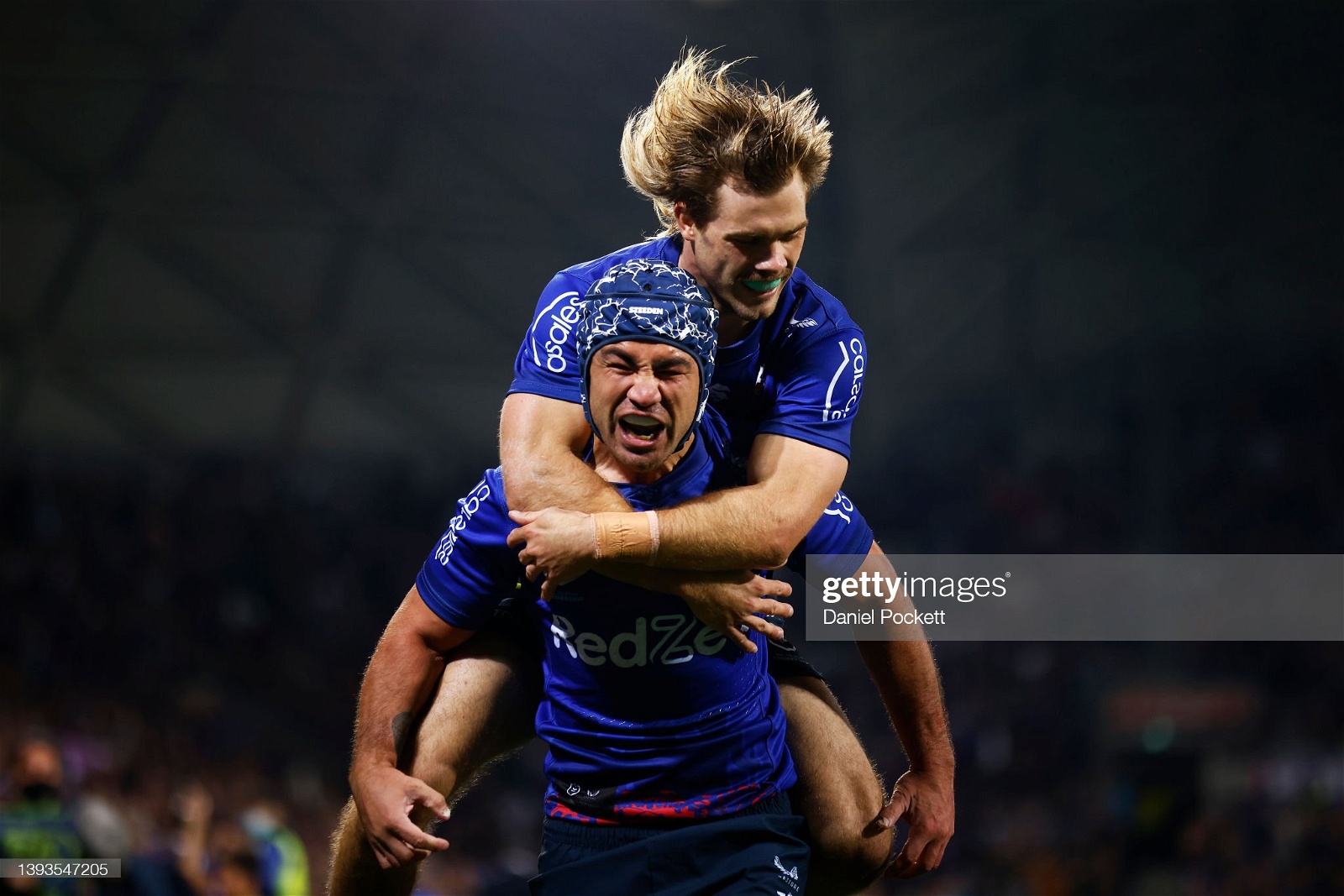 NRL Round 7: Team of the Week

ANZAC round in the NRL, and it is once again time to take a look at Edge of the Crowd's team of the week for round 7.

NRL Round 7: Team of the Week

ANZAC round in the NRL, and it is once again time to take a look at Edge of the Crowd's team of the week for round 7.

It was ANZAC round in the NRL, and it is once again time for Edge of the Crowd's team of the week. Here's who we picked:

Ryan Papenhuyzen has started 2022 with a career-best season, leading the Dally M voting so far. After this round, he should easily remain in that top spot. With two tries, two linebreaks and three try assists, New Zealand were unable to find a way to stop him, and he played a vital role in their 70-10 victory.

Nofaluma’s play on the wing opened the scoring for Wests against the Rabbitohs. From there, he broke through tackles and made distance for the Tigers, scoring twice himself. While Luke Brooks got the highlight play for the win, without Nofoaluma earlier in the game, the scores would not have been level.

Siosifa Talakai was nothing short of incredible. His early tries put Manly on the back foot at the very start of the game. Additionally, his passing set teammates up for three more tries, as the Sharks set up one of the biggest first-half leads of the comp.

Penrith had another excellent team performance against the Raiders this week and Crichton’s try-scoring continues to terrorise opposing teams. With two linebreaks and three tries, Crichton showed why he’s a regular try scorer for one of the best sides in the league.

Another part of the best spine in the NRL, Munster shined at setting teammates up for success. Despite not scoring himself, his 190 run metres, two linebreaks and two linebreak assists played a key role in getting Melbourne downfield, and his three try assists were the result of his excellent playmaking.

A player that is no stranger to teams of the week, teams of the year, or just about any other accolade, Nathan Cleary is one of the best players in modern football. His accurate kicking and passing set the Panthers up for success, as it does every round. He also helped set up two tries for his teammates.

A regular highlight for the Broncos, Payne Haas was once again one of the hardest workers on the field for the Broncos. With 39 tackles and 254  run metres, Haas brought an all-around performance from the front, as the Broncos took out a solid victory at home.

While the entire Melbourne side could place claims to a team of the week position, Harry Grant was another standout. Five tackle breaks and 30 tackles for Grant helped keep the Warriors from having almost any success at all on the attacking front.

A strong front row performance from the Eels kept the Knights completely scoreless. Campbell-Gillard played his role in this, providing plenty of tackling, while also powering through the Knights. His 23 tackles and 144 metres, showed why the Eels were top four contenders, and why Campbell-Gillard deserves his place in this side.

Another excellent forward for Parramarra, Papali’i put up 62 post-contact metres, as the Knights struggled to stop his momentum. Additionally, his 31 tackles, alongside his teammates, took energy away from the Knights as they struggled to answer the Eels scoring.

More than 200 running metres and 30 tackles is a tough feat, and Keaton Koloamatungi made it look easy. In addition to this, he also broke through tackles on 5 occasions, to put up a tough fight against the Tigers.

Another player up the top in Dally M voting, Isaah Yeo is having another very memorable season. In Penrith’s dismantling of Canberra, Yeo put up 126 run metres, while also providing 30 tackles, and only missing a single tackle. A linebreak also helped in his contributions to the Panther’s dominance.