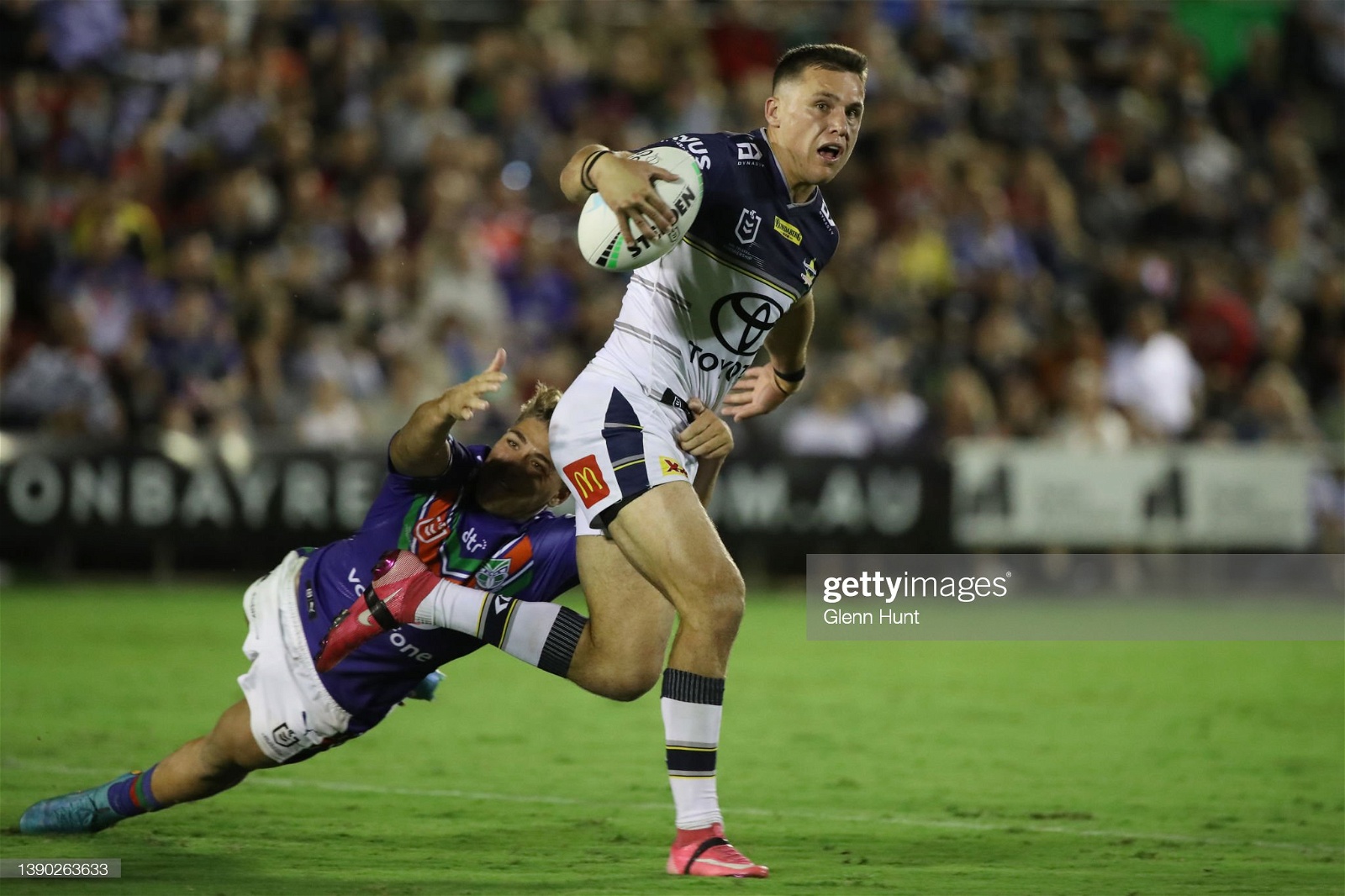 While his team was unable to come away with the win, Scott Drinkwater was a key part of forcing golden point. Running for 200 metres and breaking the line once, the Warriors' defence struggled to keep him contained. Additionally with six tackle breaks and 58 post-tackle metres, even when defenders could get to him, they struggled to bring him down.

While the whole Sharks side impressed this week, Katoa was one of the standout stars. With two linebreaks and two tries, it seemed that the Tigers could do nothing to keep Katoa from scoring. With his third straight game with multiple linebreaks, Katoa fits well into a side that has the most linebreaks in the NRL.

After impressing in his first two NRL seasons, Kotoni Staggs spend much of 2020 and 2021 on the sidelines with injury problems. While he was not particularly impressive in his first few matches, Staggs came through to support the Broncos in a tough matchup. In addition to his 196 metres and 14 tackle breaks, Staggs also contributed to slowing down the Roosters, providing 18 tackles in defence.

Manu had two tries and two linebreaks in his effort against the Broncos, continuing his superb form this season.  A regular appearance in the Roosters' side since he debuted in 2016, Manu’s early season form means that a career-best year may be on the cards.

While only new to the NRL, winger Taylan May has slotted into the 2021 premiers excellently. His seven tackle breaks and single linebreak all helped expose flaws in the Bulldogs' defence. His try in the seventh minute of the game also set the tone early in the match.

A name that is no stranger to “team of the week” lists, Munster is easily one of the best five-eighths in the NRL. With 160 total metres, as well as two try assists, Munster’s playmaking skills were well on display in the Storm's performance this week.

The Sharks picking up Nicho Hynes may have been one of the best moves in this past offseason.  Despite a more forgettable game with his conversions, 145 run metres, and 409 kicking metres, Hynes ensured that the Sharks had excellent field position for almost the entire game.

Reagan Campbell-Gillard was phenomenal for the Eels side. 241 run metres, including 104 post-contact, is representative of how Campbell-Gillard was able to bulldoze through the Titans' line. With 37 tackles, he also made it tough for Titans to get the same numbers with the ball.

With 47 tackles, Damien Cook was one of the biggest reasons why the Dragons were shut out for an entire half. Cook has been a vital part of Souths’ defence for years, and early signs show the 30-year-old has no signs of slowing down.

After missing a couple of weeks in the 2021 season, Josh Aloai has made up for it in 2022 with impressive performances in his first two games of the 2022 season. With 18 tackles and two linebreaks, Aloai’s hard work paid off in the muddy, tough conditions of McDonald Jones Stadium.

With 45 tackles against the Cowboys, Euan Aitkin proved a dominating force on the forward line. While Shaun Johnson’s field goal may have been the headline of the game, the result may have been very different without the work ethic of Aitkin.

Manly’s backfield may get more attention, but the work of their forwards sets the backfield up for their big plays. Dealing with Olakau'atu’s 34 hard tackles took energy out of the Knights' side, which lead to a try of his own late in the game.

While only 24, Victor Radley has been part of two premiership-winning Roosters sides, and his play this week indicates he wants to be part of a third. His 45 tackles against the Broncos prevented the game from getting out of hand early and then helped the Roosters make their second-half comeback.

While his tackle count was low, Angus Crichton managed to still find ways to help his team win. An impressive 132 run metres, as well as setting up a try and a linebreak, earn him a spot on the bench.

Another hard worker this week, Josh Curran made a massive 50 tackles this week. This massive effort, alongside a linebreak, kept the scores level until the very end.

The textbook example of a forward who can run, David Fifita plays a much bigger role in the Titans' attack than many forwards. 143 run metres and a linebreak is a perfect example of that.

Corey Oates was another dominant winger this week. His matchup alongside Kotoni Staggs carried the Broncos' attack and kept the game from being lopsided.