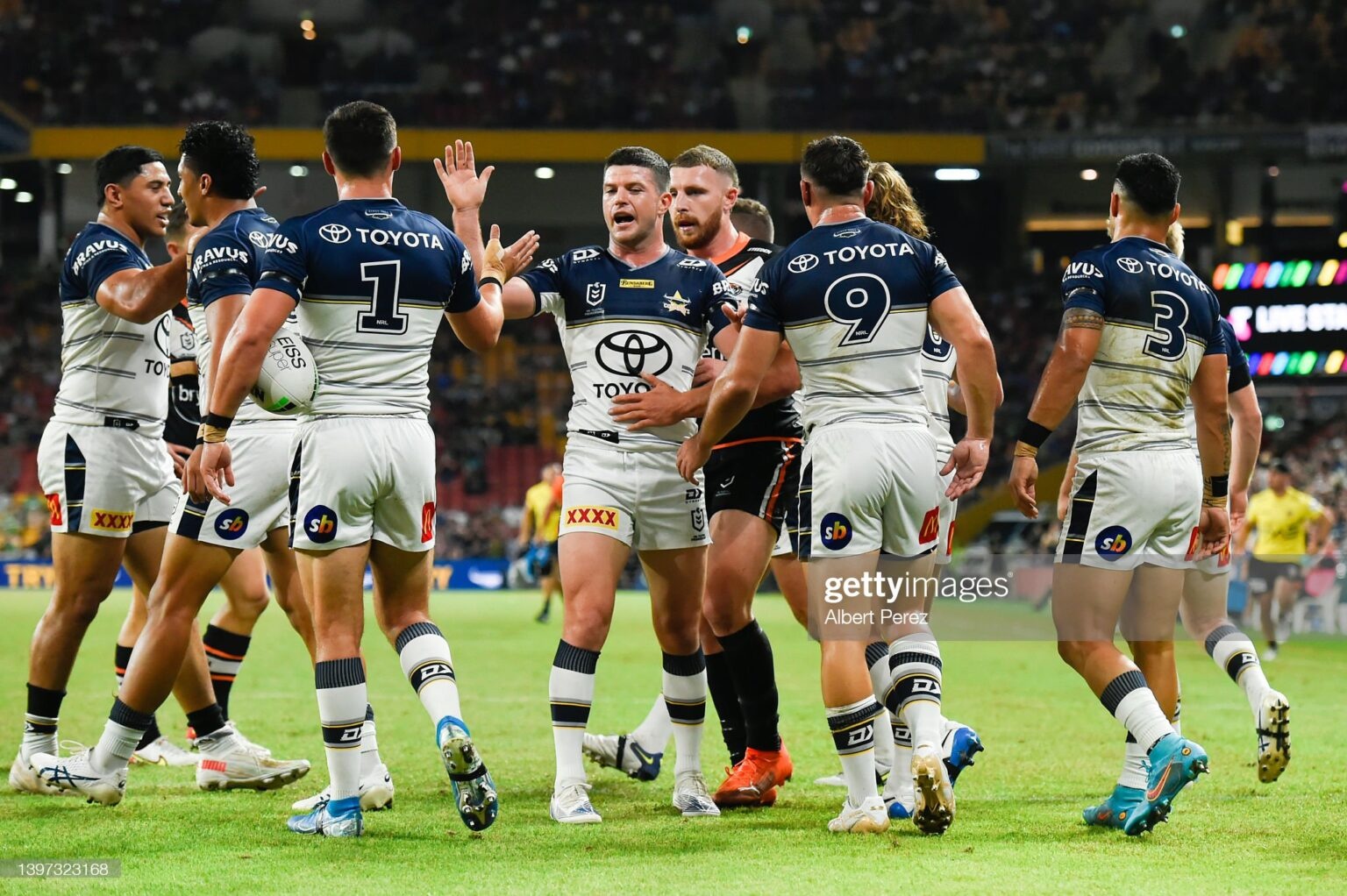 NRL Magic Round: Team of the Week

A massive week in football with the magic round, some players dominated on the big stage and were selected in Team of the Week.

NRL Magic Round: Team of the Week

A massive week in football with the magic round, some players dominated on the big stage and were selected in Team of the Week.

Magic Round is always a special time in the NRL and this week was no different. There were some big hits, some big wins and most importantly for the Bronco's fans, a big blowout against the Sea Eagles.

This week's team of the week has many new names from across the competition. Let us know how you feel about the team on Twitter.

Scott Drinkwater was key in getting the Cowboys over the top of the Tigers in the last match of the round. He got over the try line early to open the account of the Cowboys before dominating at the full-back position all match. He finished with 142 kick metres as well as being instrumental in setting up his teammates to get over the line seven times.

Unfortunately, he was on the end of an attempted tackle by the Tigers' Jake Simpkin that ended with Simpkin failing his HIA and spending the rest of the match on the field. Drinkwater has done his Origin chances no harm by being the best of the week.

The man to set up Scott Drinkwater for his amazing try makes the list in the first of our wings. He produced one of the greatest passes of all time when he was tackled while being airborne, flicking the ball back to Drinkwater, who went onto score.

He also went on to finish as the equal top point scorer of the match thanks to his two tries as well as second for 158 metres run in the match.

In a massive win for the Broncos, Cobbo made an instant impact scoring his first of three tries within the first minute of the game. At only 19 years of age, the winger is putting in a good argument to be handed an early Origin jersey.

As well as finishing as the second-highest point scorer for the match, he ran for a total of 203 metres to leave the Manly defence behind in the dust. The youngster is having a great year and looks like a good prospect for the next decade.

The almighty Panthers got over the top of the Storm in a win that surprised quite a few people. One of the biggest reasons for the win was the amazing work of Izack Tago, who scored his first of two tries in the fifth minute of this one.

No one deserves this award more than Tago, who leads in almost all key scoring categories. He ran the most metres with 198 and got through the most tackles with 7 breaks, an amazing effort that saw a quality Storm side left behind in the dust. He needs to clean up his match after giving away a penalty and having three errors.

The weekend's relatively highest-scoring match saw Joesph Manu make a couple of key plays that made the difference on the night for the Roosters. While Manu didn't get over the try line himself, he made one try assist and three linebreak assists to give the Roosters a chance at winning, which they took.

Manu did the right thing with the ball in hand on the run as well as when passing. He burst through eight different tackles only second to the Eel's Ryan Matterson. One particular highlight was the super slick ball work that allowed Joesph Suaali to get over the line to almost seal victory for the Roosters.

Another one from the winning Cowboy's side, Dearden, played a crucial role in the North Queensland win over the Tigers to make it five wins a row for the boys.

It took Dearen some time to get into his worth, but it was well worth the wait. He ran halfway across the field to then hit up Peta Hiku with a pinpoint pass that allowed a try. His work continued but by foot after Jeremiah Nanai took the catch from Dearden to seal the match. He still has work to do, though, after missing three tackles in this one.

NRL ROUND 5 TEAM OF THE WEEK

Another from one of the big Queensland clubs after a big win for the Broncos over the Sea Eagles this week. Not only did Adam Reynolds convert every opportunity he was given and kick a penalty goal in the 22nd minute.

Reynolds managed to cross for a try to be the highest point scorer for the match. Reynolds also picked up a couple of try assists to show how much he contributed to one of the Broncos’ biggest wins this season.

In a week without a massive amount of work from the props, Josh Papalii gets through as the best of the week. He managed to get over the line for a try in the 21st minute to get the Raiders 10 points up just after the 20th minute.

The Raiders continued to run over the top of the Sharks, who looked slow, especially behind the play. It wasn't just on offence that Papalii made a difference. His 34 tackles were the second most for the Raiders, who managed a good win after a week with a lot of pressure on Ricky Stuart.

No one was better than Cotter this week as a prop. He was key in getting the Cowboys over the top of the Tigers in the last match of the round.

Unfortunately, the week's talk for him will be the dangerous tackle against Tupou, which allowed the Tigers to get some much better field position. Cotter had a great mix of attacking with the most run meters (169) of the match and 40 tackles for the Cowboys, only eight behind Reece Robson, who had the most for the Cowboys.

The closest match of the week was between the Warriors and South Sydney, and outside of Reece Walsh dominating for the Warriors, there was no other better on the field than Cook. He scored the side's fifth try of the match and got the most (43) tackles for the Bunnies while getting through the opposition six times with tackle breaks.

What will be spoken about most is his sin-binning for a professional foul with only a few minutes to go in the match. A lack of discipline may cost him going forward, but Cook is clearly a massive talent who deserves this spot.

The big Fijian was a big part of the Panther's demolishing win over the Storm. This match was meant to be one of the best of the week, but in the end, it was an easy win for the Panthers, and that was largely down to Kiku.

His try to soar over the top of Marion Seve and grab a cross-field kick was a clear highlight in the 10th minute of this match. He also contributed with a try assist as well as having a linebreak assist. more than the assists though, was the importance of his presence on the field, allowing the quicker men to go to work.

He's only coming into his 24th year, yet he looks like a veteran on the field. While the Eels couldn't quite get over the line against the Roosters on Sunday, Papali'i did as much as possible. He got across the line twice, the second being an absolute highlight with him rampaging through the opposition defence to do the important work for the Eels and keep them in the game.

Along with the two tries, he broke three tackles and ran 166 metres with the ball; he will be one to watch over the next five years.

A constant feature of this list Isaah Yeo continues to be the engine room of the Panther's attacking capabilities. The young man ran 24 times for 178 metres, including 61 after the initial contact.

With the Panthers getting the chocolates over the Storm and Yeo becoming more and more of a superstar, there was almost no other choice in this position.