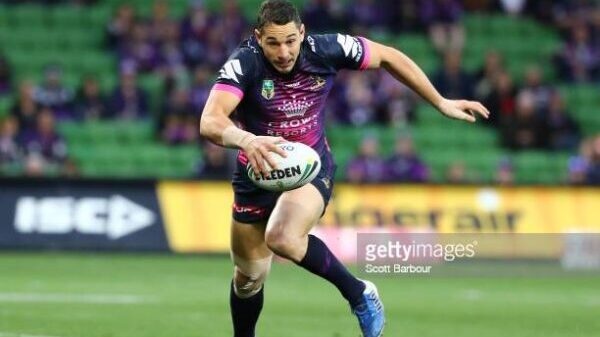 We list the former players who are the leading all-time try-scorer for their respective clubs. Why won't the closest current player beat them?

We list the former players who are the leading all-time try-scorer for their respective clubs. Why won't the closest current player beat them?

There are 13 NRL clubs whose all-time try-scoring record is held by a former player. In Part 1 of this series, off the back of Alex Johnston becoming the Rabbitohs' leading all-time try-scorer, we analysed if other current players had achieved this feat.

In Parts 2 and 3, we’re looking at the former players who are the leading all-time try-scorer for their respective clubs. Part 2 will break down the records we think won’t be beaten by the closest current player. Keep an eye out for Part 3 to find out who we think the future record-breakers will be.

One-club player Luke Burt debuted for the Eels in 1999 aged just 17, going on to play 264 games and score 124 tries for the club before retiring at the end of 2012. Though he never won a premiership, the former winger played in 2 Grand Finals in 2001 and 2009 and has since gone on to have a coaching career with the Titans.

Clint Gutherson, 27, started his career with the Sea Eagles in 2013 before joining the Eels in 2016. The Eels Captain and fullback, known as ‘The King,’ has played 146 games and scored 58 tries for the Blue and Gold.

Burt’s try-scoring rate was one try every 2.13 games. Gutherson scores one try every 2.52 games, so he would need to play 164 more games to catch Burt. This equates to about six-and-a-half full seasons, provided Gutherson maintains his try-scoring rate. Since he’s currently 27, Gutherson could achieve this, though we think it’s unlikely because you’d expect players to lose their try-scoring flare as they enter their 30s. Gutherson’s also bound to get injured, meaning he’d need more than six-and-a-half years to catch Burt.

Brett Stewart, 37, played as a fullback for the Sea Eagles for his entire career from 2003 to 2016 with a total of 233 games and 163 tries. A New South Wales State of Origin and Australia international representative, Stewart won 2 premierships with the Sea Eagles in 2008 and 2011.

Tom Trbojevic, 25, has scored 76 tries from 121 appearances since making his debut with the Sea Eagles in 2015. The fullback was named the Dally M Player of the Year in 2021 and scored the most tries in a season for the club, crossing the line 28 times. The New South Wales Origin representative’s season was cut short in Round 11 against the Eels after he sustained a shoulder injury while making a try-saving tackle. He is contracted at Manly until the end of 2025.

Despite playing for 14 years, Stewart, whose try-scoring rate was one try every 1.43 games, didn’t reach the 250-game mark. With his current try-scoring rate of one try every 1.59 games, Trbojevic would need to play another 135 games to catch Stewart, taking him to a career total of 256 matches. Banking another five-and-a-half seasons may seem like a given being that Trbojevic is only 25. Though it’s definitely possible, there’s no denying that Trbojevic is prone to injury, which we’ve seen again this year. Add to that potential future Origin duties and Trbojevic would be at a stretch to catch Stewart.

Manu Vatuvei, 36, scored 152 tries across his 226 games with the Warriors from 2004 to 2017, before a short stint with Salford Red Devils and his official retirement in mid-2019. The winger and New Zealand and Tonga representative was the first player to score at least 10 tries in 10 consecutive seasons in NRL history.

Halfback Shaun Johnson debuted for the Warriors in 2011. After a three-year stint with the Sharks from 2019 to 2021, the 31-year-old returned to his original club. Johnson is a New Zealand International representative and has scored 64 tries from his 173 appearances for the Warriors.

Johnson is no Johnston when it comes to try-scoring, being a halfback rather than a winger. Equally, Johnson is no Vatuvei. His try-scoring rate is one try every 2.7 games compared to Vatuvei’s one try every 1.49 games. This means Johnson would need to play another 173 games to catch Vatuvei, which is about seven full seasons. At age 31, we think it’s safe to say that it’s impossible for Johnson to catch Vatuvei.

Andrew Ettingshausen, known as ‘ET,’ played as a centre, winger and fullback for the Sharks from 1983 to 2000, playing 328 games and scoring 165 tries. The New South Wales and Australia representative also played for the Leeds Rhinos in the Super League and was inducted into the NRL Hall of Fame in 2008.

Sione Katoa has made 59 appearances and scored 39 tries for the Sharks since making his NRL debut in 2018. The New Zealand born 24-year-old winger is narrowly ahead of Wade Graham (38 tries) and Ronaldo Mulitalo (35 tries) in the leader board of top try-scorers for the Sharks from the current generation of players.

Katoa has a higher try-scoring rate of one try every 1.51 games compared to Ettingshausen’s 1.99 games. In saying this, scoring 126 more tries, the equivalent of 190 more games at his current try-scoring rate, is no easy feat for Katoa. He may only be young now, but he’s unlikely to maintain his aerial abilities for another seven-and-a-half NRL seasons. Factor in injuries, transfers and the stiff try-scoring competition that Katoa faces at the Sharks from Ronaldo Mulitalo, and the likelihood of Katoa catching Ettingshausen is even more challenging.

Hazem El Masri was a winger for the Bulldogs from 1996 to 2009, having played 317 games and scored 159 tries for the club. The Lebanese-Australian New South Wales and Australia representative has held many records over the years, including the most points and most goals in a game.

Bulldogs second-rower and Captain Josh Jackson, 31, debuted for the club in 2012. The Australia and New South Wales State of Origin representative has scored 24 tries from his 230 games with the Bulldogs, picking up 2 Dally M Second Rower of the Year awards along the way.

Jackson is notably the only Second Rower on our list because Second Rowers aren’t known for try-scoring like wingers are. Jackson is arguably the Bulldogs’ leading try-scorer among their current players because the club is in a phase of reconstruction and few players have been there for more than a couple of years. With a try-scoring rate of one try every 9.58 games compared to El Masri’s 1.99 games, Jackson would need to play another 1293 matches to make Bulldogs history. Edge of the Crowd as we are, we’re going to have to stick with the majority and say that Jackson catching El Masri is impossible.

Billy Slater made 319 appearances and scored 190 tries for the Melbourne Storm across his 16-season career as a fullback from 2003 to 2018. He was awarded the Dally M Player of the Year in 2011 and won 4 premierships with the Storm, though 2 were later stripped due to salary cap breaches. The 38-year-old is making his Queensland State of Origin coaching debut in 2022, having represented Queensland and Australia himself for many years.

Having made his debut in 2019, Ryan Papenhuyzen has scored 45 tries from his 66 appearances as a fullback for the Storm. The 23-year-old is yet to represent New South Wales in the State of Origin having been injured during the Origin period in 2020 and 2021. He is injured again this year and has not played since sustaining a hamstring and knee injury in Round 9 against the Dragons.

Slater is the second-highest leading all-time try-scorer in rugby league history, behind Ken Irvine on 212 tries for North Sydney and Manly. Papenhuyzen’s current try-scoring rate of one try every 1.47 games eclipses Slater’s rate of one try every 1.68 games. Despite this, he would need to play another 213 games or eight-and-a-half seasons while maintaining this rate to reach Slater. He is only 23, though he’s also injury prone, so we think Papenhuyzen catching Slater’s record is a stretch.

Why won't they be caught?

Luke Burt, Brett Stewart, Manu Vatuvei, Andrew Ettingshausen, Hazem El Masri and Billy Slater all racked up more than 120 tries for a single club. Their phenomenal try-scoring records are difficult to beat at the best of times, but the closest current players on this list also have numerous factors working against them.

Trbojevic and Papenhuyzen are injury-prone. Johnson and Jackson are nearing the end of their careers and play in positions that don’t yield many tries. Katoa has competition from his teammates. Gutherson played for three years at a different club.

It looks like these leading all-time try-scorers are unbeatable legends, at least for now. But the impossible is only the impossible until it’s done.