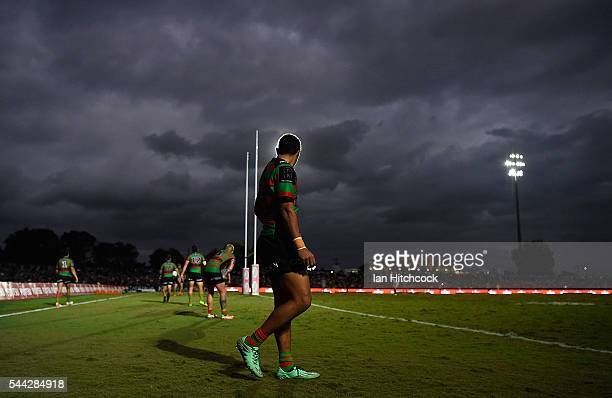 Alex Johnston broke the South Sydney Rabbitohs’ all-time leading try-scorer record in Round 12. Which other current players hold this title?

Alex Johnston broke the South Sydney Rabbitohs’ all-time leading try-scorer record in Round 12. Which other current players hold this title?

Alex Johnston broke the South Sydney Rabbitohs’ leadingall-timetry-scorer record in a 44-18 win over the Wests Tigers in Round 12 of the NRL. He scored a hat trick to reach 147 tries across his 178-game career, surpassing Nathan Merritt’s record of 146 tries for the foundation club.

This begs the question: do any other current players hold the title of leading try-scorer for their club, and if so, who are they? We’ve broken down the stats to answer this question and analyse the likelihood that the next closest current player will catch their record.

Cody Walker made his debut as a 26-year-old in 2016 for the Rabbitohs and has made 154 appearances with 73 tries. The five-eighth, now 32, has played at representative level for New South Wales and the Indigenous All Stars.

Jarrod Croker has been a scoring machine for his entire career, scoring 133 tries in 292 games as a centre for the Raiders. Now 31 years old, he debuted in 2009 at the tender age of 18 and was promoted to Captain in 2015. Croker’s 2022 season is over and his NRL future is in doubt after a reoccurrence of a shoulder injury he sustained in Round 9 against the Bulldogs, his only appearance this season.

After making his debut through a one-year stint with the Gold Coast Titans in 2008, Jordan Rapana joined the Raiders in 2014. From his 164 games with the Raiders, the 32-year-old winger has scored 84 tries and was the team’s leading try-scorer in 2021. He is signed at the Raiders until the end of 2023.

Rapana averages one try every 1.95 games, meaning he would need to play another 96 games with the same try-scoring rate to catch Croker, who averages one try every 2.20 games. While this feat is made more likely by the question mark over Croker’s future in the game, Rapana would have to continue playing for almost another four full seasons. This is unlikely given that he’ll be 33 in August. With all this is mind, Rapana won't catch Croker.

David Nofoaluma made his debut with the Wests Tigers in 2013, immediately making his mark as a top-grade winger after winning the Dally M Try of the Year. Signed at the club until the end of the 2025 season, the 28-year-old has scored 92 tries from his 171 appearances. He was the Tigers’ top try-scorer in 2021.

After making his debut for the Tigers aged 18 in 2013, Luke Brooks became the club’s starting halfback the following year and is signed until the end of 2023. From his 183 games, Brooks, now 27, has scored 42 tries and is the Tigers’ leading all-time try-scorer in the halfback position.

Brooks scores a try every 4.36 games, which is understandably low given that he’s a halfback and is more likely to be racking up try assists. Based on this, he would need to play another 218 games to reach Nofoaluma’s record, taking him to an unlikely 401 career games. Nofoaluma’s rate is a much higher one try every 1.86 games, and they are close in age so they will likely continue playing for a similar number of years. As such, it's unlikely Brooks will catch Nofoaluma.

Why won't they be caught?

The fact that Alex Johnston, Jarrod Croker and David Nofoaluma are the leading all-time try-scorers at their respective clubs, surpassing a combined 179 years of former player’s records, speaks to their prolific try-scoring talent.

It also speaks to their loyalty as one-club players because such loyalty has been said to have dwindled over the years with clubs hunting rising talent. The introduction of the Redcliffe Dolphins and the impact of the pandemic on clubs like the Warriors only adds fuel to this transfer fire.

While the Rabbitohs, Raiders and Tigers’ try-scoring record-holders are unlikely to be caught by the next closest player, this doesn’t rule out the possibility that up-and-coming talent will rain on their parade in the future. Only time will tell.