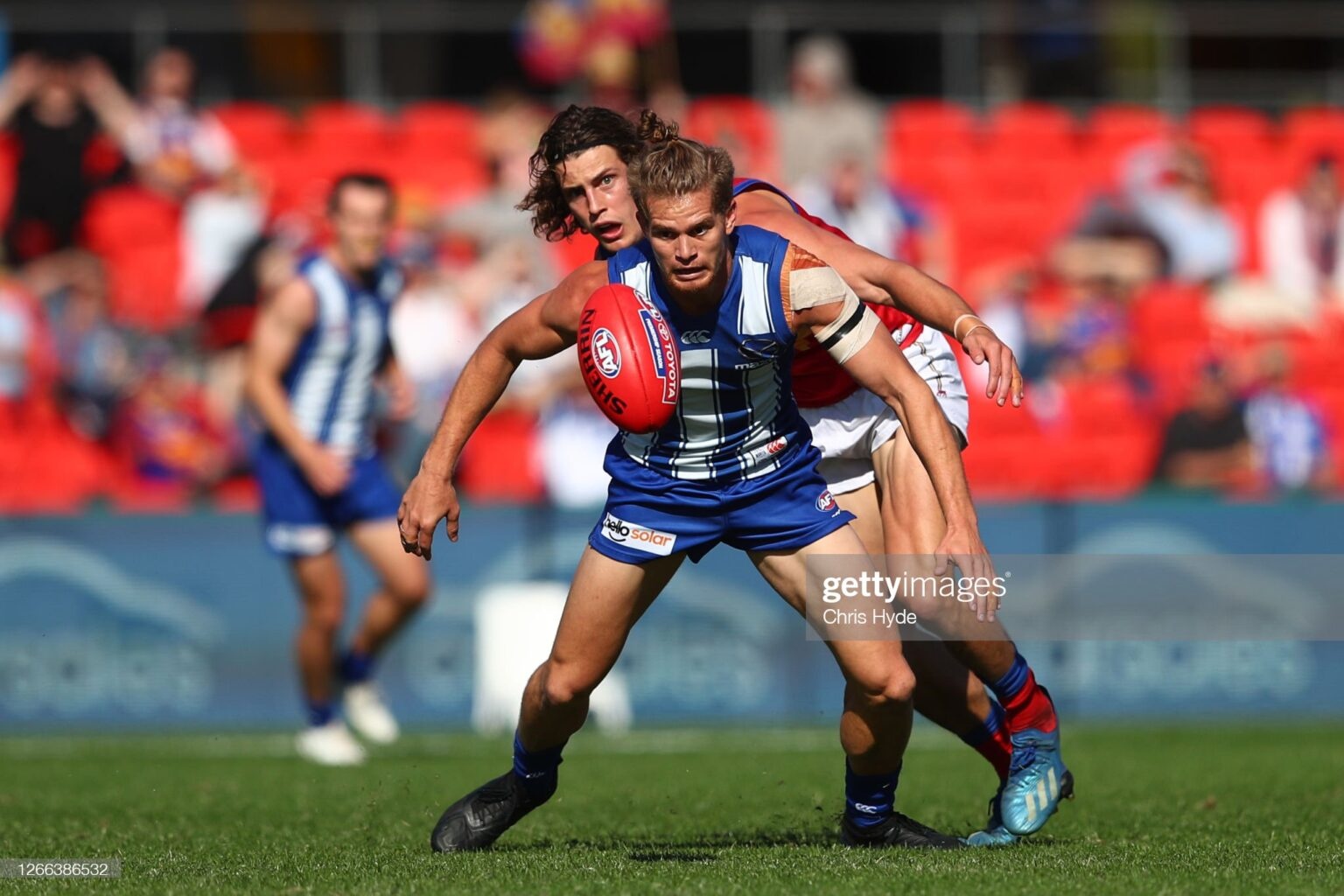 North Melbourne AFL Season Preview: Can the Roos get off the bottom?

2022 looms to be yet another rebuilding season for the reigning wooden spooners, yet it is not all doom and gloom for the Kangaroos.

North Melbourne AFL Season Preview: Can the Roos get off the bottom?

2022 looms to be yet another rebuilding season for the reigning wooden spooners, yet it is not all doom and gloom for the Kangaroos.

The 2022 AFL season looms to be yet another rebuilding season for the reigning wooden spooners, yet it is not all doom and gloom for the North Melbourne Football Club.

North Melbourne were the odds-on favourites to finish in the bottom four at the start of the 2021 season, and they ended up with the wooden spoon. They began the 2021 season with four straight losses of 40 points or more. However, they found some momentum late in the season and finished with four wins and one draw.

The Roos' 2022 preseason hasn't been kind to them, with Jed Anderson caught up in a vaccine debacle and then losing by 88 points to the Demons in their first practice game. Kangaroos fans have some new acquisitions to be excited about.

Hugh Greenwood, who was spectacularly delisted by the Gold Coast Suns, is a huge addition. Jason Horne-Francis, the 2021 1st Draft pick, appears primed for a Round 1 debut. Then there's the midfield trio of Jy Simpkin, Tom Powell, and Luke Uniacke Davies, who are all improving at a rapid pace. The Roos are looking to prove something as a group this year.

The Kangaroos still have a long way to go before they can be considered a finals contender, and controlling possession would undoubtedly help that cause. North ranked first in Opponent Disposals per game and Opponent Points per game in 2021.

They don't get enough ball, and when the opposition does get possession, they tend to score or get Inside-50 too frequently. Losing Robbie Tarrant during the offseason is a huge blow to an already struggling defence.

Aidan Corr was traded to the Roos in the offseason of 2021 and appeared in only two games last season. In 2022, expect the Roos' defence to revolve around Corr and their high-disposal defenders Jack Ziebell and Aaron Hall. Last year, the Roos finished second in Hitouts thanks to veteran Todd Goldstein. With this in place, there should be no excuse for the Roos not having first choice of the ball out at centre bounces and at stoppages.

Some pre-season work with the ruck and midfield groups could assist the Roos in playing a more tempo controlled style of footy, preventing their opponents from controlling the game with their own possession.

Last season, Nick Larkey scored 42 goals in 22 games, including seven against the Blues. In eight games, Callum-Coleman Jones scored 11 goals. Two key forwards and two solid mid-sized forwards in Jaidyn Stephenson and Cameron Zurhaar means the Kangaroos forwards line could cause some headaches for opponents during 2022.

Losing ground in the 2021 season early proved costly. The Roos never really found their feet, not winning a game until Round 9. Their other wins all came after the bye round. Jy Simpkin won the Best and Fairest award and led disposals at the club with 592. Tarryn Thomas really improved through increased minutes through the midfield and Aaron Hall shone down back.

AFLW ROUND 7 WRAP: BLOWOUTS, THRILLERS AND EVERYTHING IN BETWEEN

YOUTH. With an average age of 23.5 puts them as the second-youngest team in the competition. Whilst lacking experience, the Roos should be fit, especially in that firing midfield and half-forward groups. Look to see lots of run and carry football this year with the youth. The Kangaroos are building something special.

DEFENCE. With no real presence in the backline, opposition teams scored the most points per game against the Roos than any other side in 2021. With Aidan Corr back the Roos should have spent pre-season trying to fix their leaky defence.

TOM POWELL. Star in the making. Powell started 2021 hot including a 25 disposal game against the Dockers. Was extremely stiff to not gain a rising star nomination last year but the won't bother the 19-year-old. Big future for Powell if he can help lead the young midfielders at the Roos.

I, like many Australians, love an underdog story. I want to see the Roos do well and I think with the addition of some pretty good talent this offseason they can at least get off the bottom. Another wooden spoon would cause serious speculation around David Noble's job. Look to see their young midfield shine and grow this year with their talented tap ruckman in Goldstein.