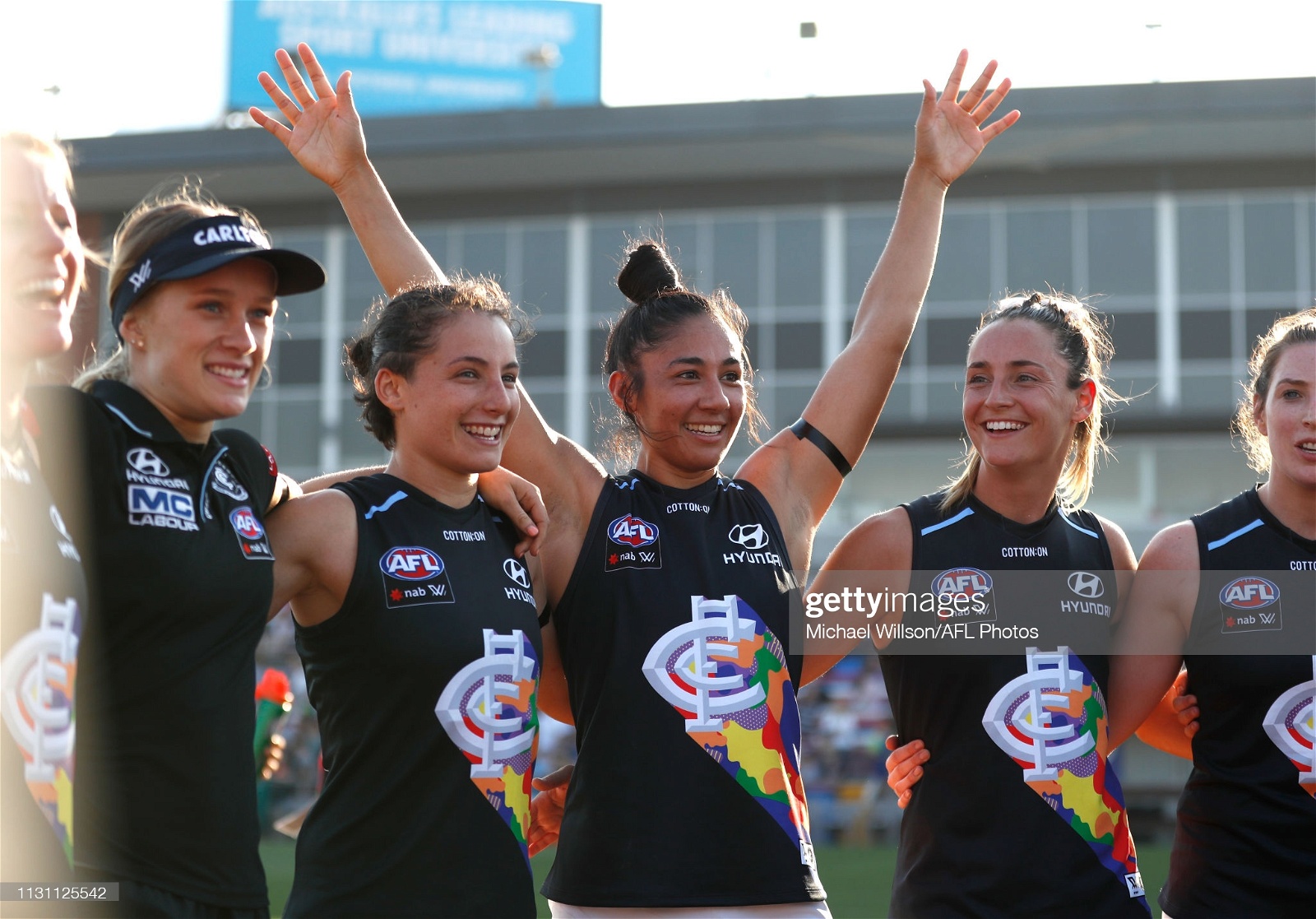 Tori Gorves-Little and Darcy Vescio are contributing to a changing landscape in Aussie Rules football, both announcing they're non-binary, eliciting a positive, encouraging effect towards acceptance, understanding and being seen and heard going forward.

Tori Gorves-Little and Darcy Vescio are contributing to a changing landscape in Aussie Rules football, both announcing they're non-binary, eliciting a positive, encouraging effect towards acceptance, understanding and being seen and heard going forward.

We've seen plenty of trailblazers across five seasons of the AFLW. However, this year, there's a couple of players who are yet again changing the game, and the awareness towards a gender-diverse environment in the sport.

But now, in 2022, two more players will etch their names into AFLW folklore - Gold Coast Suns utility Tori Groves-Little, and Carlton Blues forward Darcy Vescio, both coming out as non-binary in the past two weeks.

For Groves-Little - the AFLW's first out non-binary player -, they described the feeling of announcing their gender identity as "daunting and scary", especially being the first to do so within the national women's competition, however, added they were now "comfortable in [themself] and in [their] body".

Vescio, who, a week later followed Groves-Little in coming out as non-binary also reinforced the fact it felt "daunting" to do so too, but importantly, a declaration that filled them with "a lot of warmth and happiness".

Both players use they/them pronouns, however, as Groves-Little mentioned, they wouldn't be totally upset at a wrong pronoun being used, instead looking to educate more so, reminding people its a quick and easy change to use 'they' - but this doesn't mean one should purposely use 'she'.

They/them pronouns aren't a new concept to refer to a singular person either, and chances are you've used them before - "Who arethey?", "Look atthem!","Who lefttheirbag here?" all examples of using the pronoun to refer to one person.

It's worth noting too that West Coast Eagles defender Belinda Smith uses she/they pronouns, meaning the two should be used interchangeably when speaking about her.

EDGE OF THE CROWD’S AFLW PREDICTIONS

While the notion of a gender identity away from the supposed "usual" options of man and woman may seem like a new concept to many unfamiliar with the ever-changing and ever-updating terms and language, the reality is that, as the world evolves and adapts, it creates a more normalised view towards different identities.

Last year, the AFL revised its Gender Diversity Policy for Elite Football Competitions, which was updated to allow transgender and non-binary athletes to play in the AFLW, state leagues, or other pathways - provided the individual met a certain degree of criteria.

The requirements in question related to; testosterone levels at or below five nmol/L for at least two years prior, providing information regarding height, weight, and draft data, and for the player to maintain their testosterones levels below the aforementioned five nmol/L or undergo periodic testing.

Perhaps the most prolific example of a transgender players path to elite competition is Hannah Mouncey, who was prevented from entering the 2017 AFLW draft based on "strength, stamina and physique grounds". She was however allowed to play in the VFLW for the Darebin Falcons, but opted against nominating for the AFLW draft the following year, citing the toll that fighting to play was taking on her.

However, there are endless amounts of positives that have already come from, and will continue to come from both Groves-Little, and Vescio's announcements, none more so than just a simple conversation that needs to be had, about where transgender people fit within a sporting landscape not just in Australia, but across the world.

The AFLW has always been an accepting community, from the clubs, players and supporters since the league's inception in 2017, highlighted by the annual Pride Round where teams celebrate the LGBTQIA+ community through measures such as pride-themed guernseys and uniforms, rainbow flags used by goal umpires, and rainbow-coloured 50m arcs painted on the surface of the oval. The AFL is slowly following suit, with an annual Pride Game hosted by the St Kilda Saints and Sydney Swans which will mark seven years in 2022, but similarly, has all the same visual aids.

It's a positive time for anyone who's gender identity differs to the binary of man and woman to see themselves in the spotlight with high-profile athletes and celebrities coming out and telling their stories.

As Vescio alluded to in theAFL's 'Unfiltered' segment, the realisation that one feels different to how they've been raised and lived as for the many years leading up to it, in opening up and confirming as such within, it is a vulnerable time, as you're not sure of the perception, nor reception others might have to such news - especially if it's an unfamiliar concept or thought.

"Over the last little while, I feel like I've come to the realisation that I'm non-binary," Vescio said through tears and multiple heavy breaths.

"I feel like I've always thought about sexuality and obviously identified as not-straight but gender has been something that I have never really put much thought into until probably the past few years. It makes a lot of sense to me, that I'm not sort of [in] the box, not quite the 'W' I guess.

"I'm not crying because I'm upset by it, it's just that it's taken a bit of time and you feel vulnerable in these moments because you're not really sure how people will respond immediately, I guess. I definitely knew that the people who love me and care about me and know me would completely understand. I think some people will be like 'yeah, no shit'."

But importantly too, it creates a sense of belief among those who might lack the courage and confidence to do so, to know it is possible, and begin to look up to these now-role models as agents of change in one's life. By seeing Groves-Little and Vescio come out so publicly, it's an encouraging sign to anyone who may fall under the transgender umbrella, looking to feel seen and accepted no matter if they have come out or not.

What is perhaps the most important feature for anyone to realise is that Groves-Little and Vescio are just people at the end of the day, like anyone else.

The bravery shown by these two to tell the public about their journey towards living as their authentic selves should be applauded, that there is simply still a person on the surface, as you can tell it is a jarring moment to do so, as evidenced by Vescio.

"I guess, what I'm saying sort of feeds into what my biggest fear is", Vescio said.

"I believe that you are what you are and the way people respond to that is not really any of you business. It doesn't change who you are if people are accepting or not. But, I guess you still have the fear that you'll be met with discomfort, or that people might reject what you're saying. But the thing about it is, that it doesn't change whether people are accepted or not.

"It's something that, that's why pride is really important because when you know who you are, that's the most important thing you can do in your life."

As we enter into the opening round of the 2022 AFLW season, Groves-Little and Vescio continue to pave the way for a greater amount of people to be seen and heard, changing the landscape of Aussie Rules and the women's game.

From everyone who is out, or still battling with their own gender identity, the LGBTQIA+ community, and the transgender community especially, owe a lot of gratitude and respect towards the two players, in telling their ever-progressing story.

Thank you Tori and Darcy, for being comfortable to do so, each announcement a positive step towards change, beneficial to plenty of people in a variety of ways, as this is just the start of more awareness and acceptance towards a community always fighting hard for love and support.