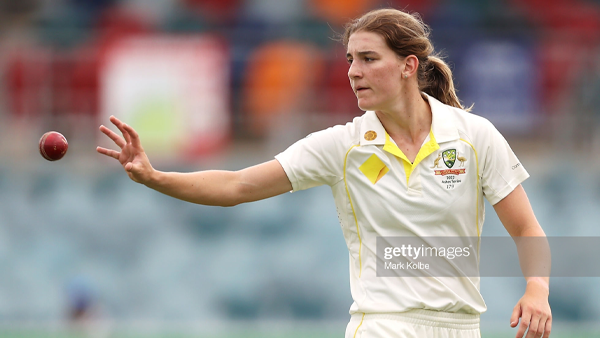 'No place I'd rather be': Sutherland relishes job in recent Ashes Test role

Australian all-rounder Annabel Sutherland overcame a shaky start to become a catalyst for her side's fightback in the Ashes Test, having a confidence in her ability to play the role that was asked of her.

'No place I'd rather be': Sutherland relishes job in recent Ashes Test role

Australian all-rounder Annabel Sutherland overcame a shaky start to become a catalyst for her side's fightback in the Ashes Test, having a confidence in her ability to play the role that was asked of her.

Australian all-rounder Annabel Sutherland has always had the confidence in her own game, but in being entrusted with the ball in the dying stages of the recent Test match, it's confirmed that others see her potential to deliver in big moments too.

In just her second-ever women's Test match following her debut against India on the Gold Coast in September last year, Sutherland's role in the Australian setup has only been improving as she gets more chances to showcase her abilities.

In the lone Test match of this current Ashes series against England winding down on the final day of play and every possible result still achievable, the 20-year-old was entrusted by captain Meg Lanning to bowl a brunt of the overs towards the end of the match, hoping for that breakthrough wicket that might lead to an Australian victory.

With 12 overs to go until the end of the Test match, England needing 69 runs to win and having plenty of wickets remaining (3/204), Sutherland was thrown the ball. She stayed in the attack to bowl the maximum number of overs she could in the remaining time that was left. Prior to this point, she had bowled seven overs, with figures of 0/35.

After her first two deliveries went for a total of three runs, she was then hit for consecutive sixes from England batter Sophia Dunkley, forcing some worried looks on the faces of the Australian camp, both in the field and on the sidelines.

But, to the medium pacer's credit, and with a little assistance and advice from her more experienced teammates in Lanning and Ellyse Perry, Sutherland was able to bounce back and help bring the possibility of what was looking to be an unlikely Australian win to be an attainable feat.

"My first over at that end wasn't great, I got hit for two sixes which I guess showed the knock that Sophia Dunkley played, how well she played but I was a bit surprised to get thrown the ball again after that over," Sutherland told media at Manuka Oval on Tuesday.

"We changed our tactics a little bit, coming around the wicket and tried to target the leg stump a little bit more which seemed to work. We were just talking about, I guess, particularly the length I was bowling each ball and we really just wanted to get it right, given we'd fought so hard to get back in the game.

"It was really cool to have Pez (Ellyse Perry) there next to me and she was really good at keeping me calm and focusing on what I needed to do."

Sutherland's next over yielded only one run in direct contrast to her over prior, as did the penultimate over of the match when England needed 13 runs from 12 balls. In the end, Sutherland finished with figures of 3/69 as she rattled England's middle order, claiming the wickets of Nat Sciver, Amy Jones and Katherine Brunt.

Given the close nature of the four-day Test match, Sutherland admitted her feelings throughout the encounter, and especially towards the end, was more exhilarating than nerving, needing to mask her feelings in order to try to keep calm and continue to bowl execute properly and to plan.

"I was pretty pumped, had a fair bit of adrenaline I reckon but it was so much fun, there was no place I'd rather be than charging in and trying to do a job to almost get a win," she said.

"I feel like I have, I guess, always wanted to be able to take an opportunity when it's thrown at me and I guess the nature of this Australian team is that it doesn't happen that often because of the depth we've got.

"Being able to take that role and take the ball when Meg threw it at me, and do my job, I feel like I've been ready to be able to do that for the last year or so but I certainly take a lot of confidence in the role I was able to play."

AN ASHES DRAW AS ENGLAND HOLD ON LATE AT MANUKA OVAL

The dramatic finish to the Test match also elicited many reactions from within the cricketing world, and the general public, about the length of a women's Test match and that it should last five days like the men's, but also the need for more women's Test matches in general.

"I guess, to see the support we had post-match, it was really nice to see and I guess, as a player, we just love playing Test cricket and would love to play more," she told.

"I think it should [give the ICC something to think about]. I think, when you get a Test match where, in that Day Four, last session of Day Four, you can have any result happen, it's pretty exciting viewing.

"I think just from a playing perspective, I guess the more we play, the more we'll get used to the nature of Test cricket and we just love being able to put on the baggy green so yeah, it'd be cool to play more [Test cricket]."

With the drawn Test match and three T20 Internationals behind the two sides, the series moves to the One Day Internationals, beginning on Thursday at Manuka Oval in Canberra, before moving to Melbourne's Junction Oval for the final two from Sunday.

In the multi-format points system, Australia leads six points to four, and with a win in an ODI netting two points, the home nation needs one win from the remaining three fixtures to retain the Ashes, which it's held since 2015.

"I don't think much changes, to be honest, I think we've had a lot of success in One Day cricket over the last few years so we're pretty confident that our cricket can get the job done," Sutherland said.

"We'll obviously meet in the next day or two about what that's going to look like from our perspective but I think we've got a lot of faith in our One Day cricket side."