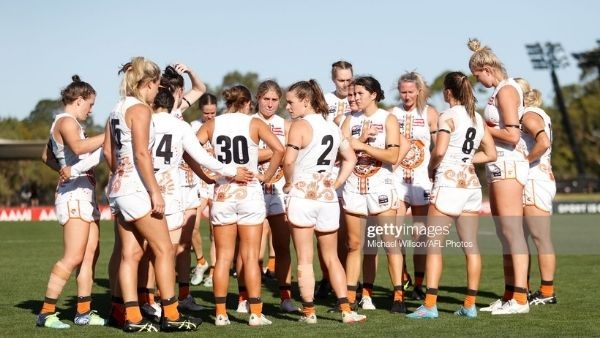 'No excuses' for GWS after disappointing loss to Melbourne

Despite coming off a COVID outbreak within the team, GWS Giants captain Alicia Eva ensures the club isn't using that as an excuse after the loss to Melbourne last weekend.

'No excuses' for GWS after disappointing loss to Melbourne

Despite coming off a COVID outbreak within the team, GWS Giants captain Alicia Eva ensures the club isn't using that as an excuse after the loss to Melbourne last weekend.

Greater Western Sydney captain Alicia Eva said that there are "no excuses" for the team's performance against Melbourne where the side only registered one goal for the match in a 37-point loss.

Despite a number of GWS players testing positive to COVID-19 which saw the sides Round Five clash against St Kilda postponed, Eva said that's not why her side lost the match on the weekend.

"I don't want to make any excuses in terms of COVID, [it] isn't why we lost the game. COVID isn't why we lost one on one contests but I'd be lying if I said it didn't have an effect on our preparedness," Eva said.

"I think you know I personally was at my peak fitness, I've had my strongest preseason to date and there were moments you know, during that game where I knew I wasn't running as well as I usually do and I was probably on day 11 out of from testing COVID positive."

As well as Eva herself testing positive to COVID, it ran riot throughout the Giants camp, with the impact of more than half the squad out of action taking a toll on player health and wellbeing.

"I think almost 20 players, I'm not sure what the exact number is but we had more than half of the squad test positive to COVID in the isolation for a week so to say that it had no impact would be a lie," Eva said.

"I think that it certainly did and I think that we need to be really careful as an as an industry to make sure that we're looking after player health and wellbeing and our club have done a fantastic job with that but it's something it certainly affected players in different ways.

"Some players tested positive and had no symptoms, other players had, you know pretty bad head colds and some players are still feeling the effects even after the week of isolation, so it's something that our club are monitoring pretty closely.

"I certainly feel like it did have an effect in terms of our running capacity but we're certainly not using that as an excuse. It wasn't the reason why we lost and it won't be an excuse going forward."

For the Giants this week they'll have to get the fundamentals right which is something that they were lacking in the match against the Demons last weekend.

"It was a really disappointing loss. In the rooms after the game I think the immediate message from Alan [McConnell] was that if we want to be a good side, we can't be inconsistent, there needs to be consistent attack on the ball," Eva said.

"We know that [there was] a few challenges going into the game on the weekend with you know, the preparedness and COVID and implications like that but you know that that's not why we lost the game.

Speaking on what the group can do better against Adelaide this weekend and not allow for a repeat of the game against Melbourne, Eva says there's a focus on reinforcing the individual strengths of the team.

"So he's (Alan) really challenged us to get back to getting the fundamentals right, we need to change angles, we need to take the game on. To continue going into the game with the same approach and [with] a really conservative approach in terms of ball movement, we're gonna get the same results," Eva told.

"It was pretty deflating looking at the scoreboard at three quarter time. Funnily enough, when you change angles and you take the game on that's when you hit the scoreboard and we leave that too late. So we've [got] a real focus on individual craft this week, getting the basics right and attacking a very good side in Adelaide with an attacking brand of footy.

"So that's what we practiced on Wednesday night and from a playing perspective, getting back to our strengths. I think it's really important that we reinforce what our strengths are as individuals and then when we bring them all together the unit that we can be as a collective so that's what we're looking to do against Adelaide this weekend."

KEY LEARNINGS FOR CROWS SAYS MARINOFF, AS BULLDOGS HANG ON IN A THRILLER

GWS will be looking to get back to the form it was in when the side faced the Western Bulldogs back in Round Four - a 21-point win -, for when the club face a red-hot Adelaide at Henson Park on Saturday.

"It's really interesting in that game against the Bulldogs, we went into that game with a number of debutantes, and the messaging was really simple, it needed to be really simple and that's not just for our young kids, I think it's also for our senior heads as well. When you try and over complicate things It can sometimes get in the way of just playing your role and performing the basics well," Eva said.

"So that's a similar theme this week and you can't look at a side like Adelaide, you need to break it down. You need to look at you know, the one-on-one battles and I think that's what the Doggies did really well against Adelaide on the weekend. They certainly did their homework, they looked at each player's strengths and weaknesses individually and found opportunities and that's what we need to do this week.

"So [we'll] go in with a really simple message of 'take the game on, be brave and don't go in conservatively against a really good side'. You need to go in with confidence and look to be able to reset it after each contest, so play contest by contest, reset, go again.

"That worked really well for us in the game against the Bulldogs, we played with an energy, we played with freedom and to be honest, that's the same way I'll be attacking the game this weekend."

The GWS Giants will face off against the Adelaide Crows at 3.10pm on Saturday, February 19 at Henson Park.