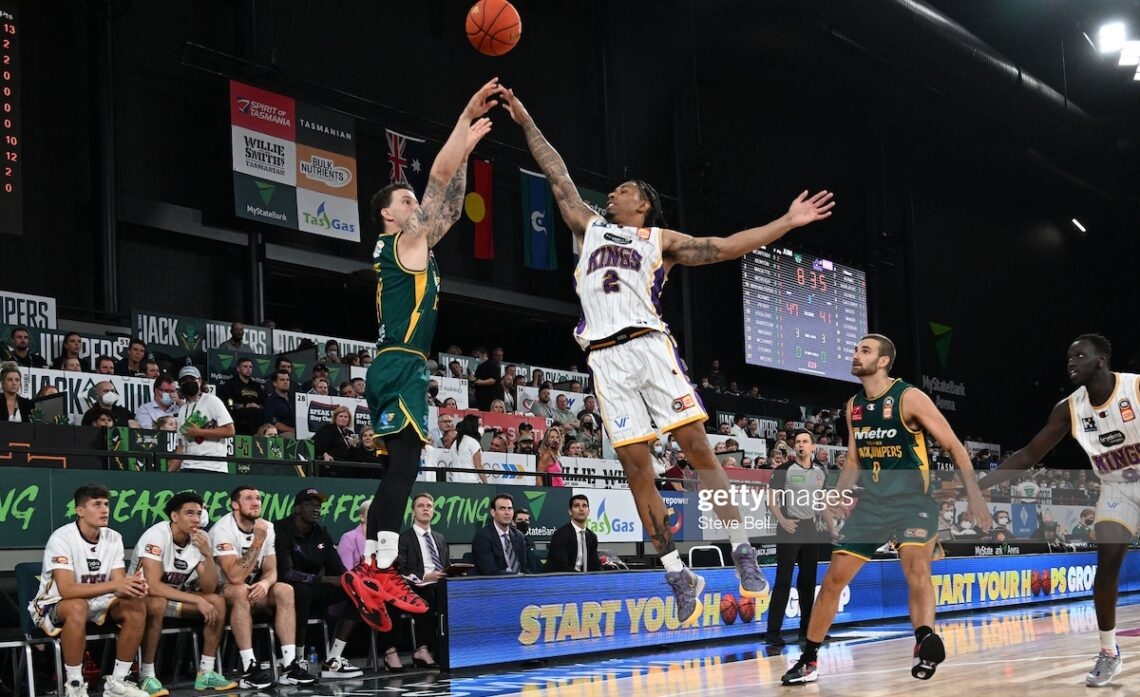 NBL Round wrap: JackJumpers make history in Round 10

While Covid-19 was back to challenge the NBL scheduling team, there was plenty of exciting action and thrilling finishes in Round 10.

NBL Round wrap: JackJumpers make history in Round 10

While Covid-19 was back to challenge the NBL scheduling team, there was plenty of exciting action and thrilling finishes in Round 10.

While Covid-19 was back to challenge the NBL scheduling team in Round 10, the Tasmania JackJumpers made it four in a row and multiple sides bounced back from big losses.

Another big weekend of matches started on Wednesday night with the New Zealand Breakers returning to the winners' list before they dropped their second match in the round.

Sunday's games finished in Melbourne where the JackJumpers continue to make history, extending their streak to four wins with an enormous first quarter that resulted in a win over United.

The round concluded with a thriller in Wollongong, as the Illawarra Hawks fell to South-East Melbourne Phoenix thanks to clutch free-throws from Xavier Munford in the dying seconds.

Breakers back with a bang

After a slow start off the Covid-19 break, the New Zealand Breakers hit back in Round 10 with a shock defeat over the Illawarra Hawks, 90-67.

Yanni Wetzell was prolific for the Breakers with 22 points and nine rebounds.

It was a strong first half that set up the match for the Breakers, who took a 52-33 lead at the halfway break and maintained this 20+ point margin through the second half.

As the Hawks slumped to their fifth loss of the season, head coach Brian Goorjian said it was a "really disappointing" loss.

"The physicality they brought to the defence, we couldn't deal with and defensively we couldn't handle their on-ball.

"We knew what was coming and we knew what the challenges were, coming into the game - so it wasn't a surprise. Maybe the game plan was a problem, I don't know."

In front of another sell-out crowd at their home arena, the Tasmania JackJumpers have stretched their winning streak to three with a 77-70 win over the Sydney Kings.

Josh Magette led the JackJumpers in scoring with 18 points, while fellow import Josh Adams put up 16.

Will Magnay continued his impressive form on offence and defence with 12 points, seven rebounds and four blocks.

Despite starting the game hot and running out to an early nine-point advantage at the first break, the Kings drifted in the second quarter as the JackJumpers launched.

The home side continued to press on for the win through the second half.

Off the back of a disappointing Round Nine showing against the Hawks, the Cairns Taipans men responded in a big way with a 102-94 victory over rivals the Brisbane Bullets.

Both squads looked a little different for the Sunshine Stoush with Nathan Sobey, Anthony Drmic and Jack Salt out for Brisbane and Scott Machado, Nate Jawai, Kouat Noi, Jarrod Kenny and Mirko Djeric missing for Cairns.

The Taipans offence was on fire, putting up the highest score of the season.

Rookie Bul Kuol (26 points) knocked down eight of his 10 three-pointers, while Majok Deng was similarly productive with 26 points and Tahjere McCall had 19 points, eight rebounds and six assists.

Adam Forde, Taipans head coach was especially happy with the way Kuol has stepped up to the opportunities.

"Here we are, down a lot of bodies and with that, you can get opportunities. No pun intended, but he has taken the bull by the horns. He has been fantastic."

After splitting their Round Nine results, the Perth Wildcats made a statement in Round 10, smashing the South-East Melbourne Phoenix 101-79.

Phoenix head coach Judd Flavell was disappointed with his sides' showing but wasn't about to use the fact they were undermanned as an excuse. However, from the second quarter, the top of the table side was outplayed.

"That second term was obviously where the game was separated. We kind of lost our way.

"We had a few turnovers in that patch there - maybe five turnovers - that contributed to eight or 10 points that they had. They also picked up loose balls and offensive rebounds that got them cheapies and then they got to the foul line as well."

NBL ROUND WRAP: PERTH DOUBLES UP IN FIRST HALF OF ROUND NINE

The Sydney Kings recovered from their Friday night loss to the Tasmania JackJumpers with a 19 point win over the New Zealand Breakers, 84-65.

Leading from the get-go, the Kings applied the pressure on defence and were able to push their lead out to as much as 22 points in the second quarter.

Sydney Kings' head coach Chase Buford was pleased with "another great defensive performance” from his side, which held the Breakers to 32 per cent shooting.

"I thought our defence was terrific at the rim. The way ‘X’ (Xavier Cooks) and Jarell (Martin) guarded down there, the way our guys were fighting over screens – I was just really, really pleased with the defensive performance, and then we rebounded the ball terrifically as well.”

“I’m really proud of the effort.”

Yanni Wetzell put up another 16 points and had four rebounds in his 50th match, but his side, unfortunately, couldn't get the win for the milestone.

Game of the round: JackJumpers make it four

On Sunday afternoon, Melbourne United hosted the Tasmanian JackJumpers at the John Cain Arena. The JackJumpers won their fourth in a row, 94-85.

It was United's first home game in 49 days, since December 19th. The last time these two teams met, United won 76-72 over the JackJumpers.

The Tasmanian based team had not yet won on the mainland going into the game, previously losing to Sydney, Perth and Cairns.

The JackJumpers got off to a fast start, setting a new season-high for most points scored by a team in a quarter with 36 in the first quarter. It was against United, the competition's best defensively rated team.

Chris Goulding entered today's game having failed to make a field goal in his previous six quarters. Goulding quickly changed that, hitting his first three-point attempt of the night.

There were also injury concerns from the United camp in the first five minutes, as Delladedova came to the bench earlier than usual in the rotation. However, after Goulding picked up his second foul early in the game, the former NBA champion returned after a few minutes.

The JackJumpers posted the second-highest first-half score of any team this season in the second quarter. Josh Adams was a force on both ends of the court.

The third quarter marked the beginning of Melbourne's potential comeback, with Goulding and Jo Lual-Acuil proving decisive, each with 20 points by the end of the quarter.

Melbourne took control early in the fourth quarter, going on a 10-2 run.

The JackJumpers were averaging 76.1 points per game entering the game, but United surpassed that total within the first two minutes of the fourth quarter.

Melbourne could not capitalise on key moments in the fourth quarter shooting 50 per cent from the line.

A huge win from the JackJumpers, they meet the Phoenix later in the week in Melbourne.

Jo Lual-Acuil finished with 26 points and 21 rebounds in a commanding performance.

Mikyle McIntosh proved his worth off the bench for the JackJumpers, chipping in with 16 points.

It was a thrilling finish to Round 10 with Xavier Munford pulling out clutch free-throws to sew up another win for South-East Melbourne Phoenix against Illawarra Hawks, 88-87.

And despite a strong first half, where they took a nine point lead into the break, they found themselves in a nail-biter, down by one with just 1.3 seconds on the clock.

The match-winner, Munford (24 points and five assists) was solid all night, Mitch Creek had 20 points and Ryan Broekhoff had a double-double of 11 points and 16 rebounds.

Tyler Harvey was the Hawks' leading scorer with 20 points.

The result sees Illawarra drop out of the top four.