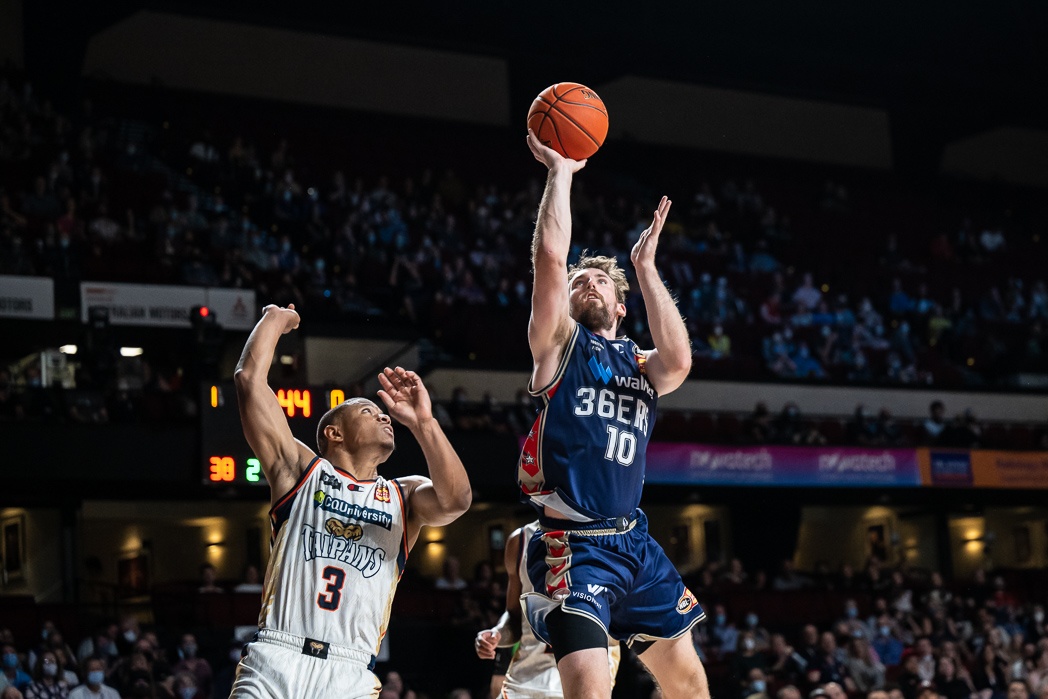 Round 16 NBL action tipped off in Wollongong on Thursday night, and it was another weekend of fiery contests capped off with the Wildcats' return to Perth.

Round 16 NBL action tipped off in Wollongong on Thursday night, and it was another weekend of fiery contests capped off with the Wildcats' return to Perth.

Round 16 NBL action tipped off in Wollongong on Thursday night and it was another weekend of fiery contests, where the Illwarra Hawks soared, the Adelaide 36ers split their points and the Perth Wildcats won on their return home.

The Sydney Kings continued their run of eight wins with a close one against the South East Melbourne Phoenix, and on Sunday, the Cairns Taipans responded after their shocking showing in Adelaide to take out the Sunshine Stoush, touching up the Brisbane Bullets with a dominant first quarter.

Edge of the Crowdrecaps all the action from the weekend.

Hawks soar over Phoenix on ladder with strong win

A big win over the South East Melbourne Phoenix has elevated the Illawarra Hawks back into the top four.

A clutch three from Canadian import Xavier Rathan-Mayes secured the victory for the Hawks, 103-97.

The strength and resilience of the Phoenix was on full display in the second-half as they clawed their way back from a 19-point deficit. They got close, just three points down, before Rathan-Mayes' three pointer was the ice on the cake for the Hawks in the final 20 seconds.

Duop Reath starred for the Hawks with 22 points and 12 rebounds, but there were contributors everywhere. Tyler Harvey also had 22 points, Antonius Cleveland put up 16 points and had four assists, while Rathan-Mayes finished with 15 points and five rebounds.

Zhou Qi had a huge game for the Phoenix with 25 points and eight rebounds, but his side has now lost three games in a row and dropped out of the top four in the early stages of Round 16.

The Adelaide 36ers are back on the winners list after a huge 83-57 win over the Cairns Taipans.

The game was blown wide open in the final quarter when Adelaide went on an impressive 18-0 run, making it their longest scoring streak of the season.

Mitch McCarron had his best game of the season with 21 points and 10 rebounds in front of the 36ers faithful.

After staring in the win, McCarron said it had been a challenging season, and he was glad to find some rhythm on Friday night.

"I have had some time, obviously the last game was last week, to think about how I have been playing," he said.

The 26-point victory was Adelaide’s biggest win this season, which has been a challenging one featuring only six wins and 12 losses. It was also the biggest win ever by any team at the Adelaide Entertainment Centre, Adelaide's home venue.

Adelaide coach CJ Bruton was happy to have snapped the losing streak, as the side looks to finish the season positively.

"Every game counts. At the end of the day, we are in a situation where we have games to play, and we have to show value to the people that put you here," he said.

"Every game we need to have the right mentality and understanding of where we are, what we have to do and delivering that in spades."

Keanu Pinder was best for the Taipans, putting together a career high 13 rebounds and scoring 15 points.

Hawks get up in heated end to JackJumpers contest in Launceston

Tensions boiled over, and the sides had to be separated when leaving the court post-game, as the Illawarra Hawks recorded an important 91-65 victory over the Tasmania JackJumpers.

After retuning to the top four on Thursday, another win on Saturday has strengthened Illawarra's position heading towards the final month of the regular season.

The Hawks' Antonius Cleveland celebrated in front of the Tasmanian crowd and JackJumpers coach Scott Roth after the final buzzer, which unsurprisingly was not appreciated by Roth, who has enjoyed some big celebrations himself, in front of the home crowd this season.

Roth had words with both Cleveland and Hawks coach Brian Goorjian, before the sides needed to be separated as they left the court.

Josh Adams­­ (21 points) and Clint Steindl (17 points) were among the JackJumpers' best.

Kings of the court in two point win over Phoenix

The Sydney Kings' winning streak continues with a thrilling 91-89 road victory over the South East Melbourne Phoenix for eight-straight.

With this run of wins, the Kings are now closing in on a finals' spot, while a fourth loss in-a-row hit the Phoenix hard, as they now sit two wins behind the fourth placed Hawks.

It was a really tight contest all night, the margins at each break three points or less, and South East Melbourne had chances to steal the win, but couldn't execute.

Jarell Martin had another stellar night as Sydney's best, with 24 points and eight rebounds, while Jaylen Adams and Dejan Vasiljevic each had 15 points.

The Phoenix had strong contributions from Xavier Munford (26 points) and Mitch Creek (17 points), but were unable to take their opportunities in the final term for a win.

The Adelaide 36ers have come crashing down to Earth, as a dominant Melbourne United side put on a show for their home crowd at John Cain Arena in a 27 point win, 101-74.

After a strong win at home on Friday night, Adelaide has been destroyed by a better, united Melbourne side, in which Brad Newley came off the bench to put up a season-high 15 points, including three three-pointers.

The day wasn't all smooth sailing, Matthew Dellavedova played just two minutes in the first half before injuring his ankle, though, he returned in the second half and hit back-to-back triples.

Daniel Johnson scored 18 points on a disappointing day for the Sixers.

In another edition of the Sunshine Stoush, it's the Cairns Taipans who have taken bragging rights with a 10 point win over the Brisbane Bullets, snapping their losing streak in the process.

A hot start from the Taipans, who had travelled down to Nissan Arena for the clash, had them leading by 23 points in the opening quarter.

As expected, the Bullets fought back across the game and even got as close as five points late in the last. However, the Taipans held off the comeback and got back on the winner's list, 98-88.

Tahjere McCall had a good night on the court, scoring 21 points, with six assists and five steals, with Bul Kuol (17 points, 100% FG) also putting together a great game for Cairns.

For the Bullets, Robert Franks continued his great form scoring his fifth consecutive 20-point game, finishing with 22. However, the disappointing, slow start in front of the home crowd set up a deficit that was too big for the side to come back from.

To close out Round 16 of NBL action, the Perth Wildcats hosted their first home game since December 19, ending a run of 14 away games.

They were up against the New Zealand Breakers, who challenged the home side in the opening period for a six point lead, but it was the Wildcats who found their groove for a 10 point win, 95-85.

The third quarter was where the Wildcats brought it back and took a stand in the game, moving ahead by five points. Majok Majok added six from the field, while Bryce Cotton sunk a three pointer, as their side won the period, 26-15.

Vic Law (26 points, 12 rebounds) and Cotton (25 points) combined brilliantly, as always, the former notching up a seventh double-double for the season. Todd Blanchfield chimed in with 14 points for Perth.

It was a fairly even contribution from the Breakers, who started hot but couldn't hold on. Yanni Wetzell (15 points), Finn Delany (14 points), Peyton Siva (13 points) and Tom Abercrombie (12 points) all added points to the board, but collectively couldn't get the job done.