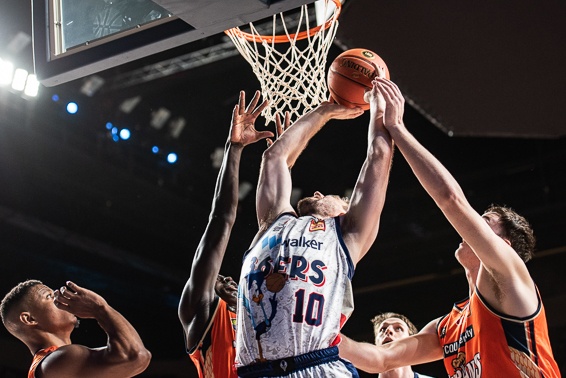 The Adelaide 36ers and Melbourne United were among the big winners of the NBL in Round 12, as the competition for playoff spots heats up.

The Adelaide 36ers and Melbourne United were among the big winners of the NBL in Round 12, as the competition for playoff spots heats up.

Amid Round 12 of the NBL, there were plenty of exciting matchups and highlights. Catch up on all the action as the season heads towards the playoffs.

Melbourne United get one over cross-town rivals

In one of the most anticipated Throwdowns in NBL history, the South East Melbourne Phoenix was looking for a big performance to defeat local rivals Melbourne United.

Unfortunately for the Phoenix, despite leading by double figures in the third quarter,Jo Lual-Acuil and United had the last laugh.

Lual-Acuil continued his hot form of recent weeks, scoring a career-high 30 points to lead United. It comes as part of a four-game streak where he is averaging more than 25 points and 13 rebounds.

Chris Goulding sealed the game for United with 44 seconds left, as he buried a three-point dagger, as part of a 15-point performance.

Mitch Creek was the Phoenix's best, putting up 23 points and five rebounds, but it wasn't enough to overcome the bitter rivals, as the Phoenix went down 87-94.

Hawks swoop down to thump Taipans

The Illawarra Hawks flexed its muscles against the Cairns Taipans in a huge 79-54 win in Round 12 of the NBL.

The Hawks were full of energy on both ends, as the offence was full of aerial highlights. Antonius Cleveland put on a dunking performance that would put the NBA All-Star weekend to shame, as he put up 15 points, seven rebounds and three blocks.

Despite that performance, he was outdone by Duop Reath, who had 16 points and five rebounds. Every member of the Hawks who played more than 10 minutes had a positive plus-minus, including a game-high +28 for Justinian Jessup.

The Hawks' defence stonewalled the Taipans, keeping them to just 17 points in the second half, the lowest score for a half this season.

MELBOURNE UNITED ‘LOCKED IN’ AHEAD OF THROWDOWN WITH THE PHOENIX

Phoenix fightback leads to escape from a hail of Bullets

The South East Melbourne Phoenix rebounded from a tough loss against United earlier in the round to escape from Brisbane with a 98-94 win over the Bullets.

Cam Gliddon was clutch for the Phoenix, with 20 points from an impeccable 7-7 shooting performance, with six threes.

Ryan Broekhoff (18 points, eight rebounds) was key for the Phoenix, while Creek and Xavier Munford also recorded key contributions with 15 points each.

The loss was Brisbane's sixth from its last seven games, and leaves the Bullets dangling a long way from the playoffs.

Jaylen Adams led the Sydney Kings to a nailbiting win over the Perth Wildcats, as the Kings held on to win 98-95 in a thrilling finish.

The Kings started fast, but were doggedly pursued by the Wildcats, who worked back into the contest, and forced a close finish.

Adams had 31 points, eight assists and seven rebounds for the Kings, as he duelled with the Wildcats' Bryce Cotton, who had 33 points and four assists of his own.

The win was the Kings' sixth from their past seven games, as the Sydneysiders come into real championship contention.

The Adelaide 36ers found itself down early to the Cairns Taipans, but were able to rally to finish with a strong 82-71 victory.

The Taipans started hard, leading by 15 points during the first half but the Sixers took control after quarter-time, outscoring the Taipans 73-48 from that point.

Sixers coach CJ Bruton was frustrated with the start his team made, but was glad with the end result.

"It was a little ugly, a little slow start, wanted to get through some sets and we got bogged down a little bit," Bruton said.

"They responded well. I thought our game plan was good, the boys stuck to it."

Bruton was effusive in his praise of his star's performance and the impact he has had on the season.

"I can't say enough about him and what he's done, the years that he has spent in this competition, having to adjust his game, as you do when you get older.

"His knowledge is second to none but his ability to impact the game, the way he did tonight and he has many other nights for us is definitely special to watch."

Taipans coach Adam Forde was frustrated by the result, and by his team's offensive performance particularly.

"Defensively, we're not that bad," Forde said. "We work so hard, for the most part, I'll say for the first three quarters, we worked so hard defensively, and locked it down, whether it was the scout personnel. or the effort, we do so good, and then we just don't reward ourselves down the other end."

Forde mentioned that some of the players had some frustration spilling over as the team lost for the seventh time in eight matches.

"There's frustrations. We do a pretty half-decent job defensively, and then we don't make teams have to defend us the same way that we are defending.

We have to defend hard, we've got to defend the back end of plays and the counters, guys are competing for position, fighting early and then we come down, we don't even make the other team have to defend - we throw it away."

Melbourne United continued its strong form with a thumping win over the New Zealand Breakers, 108-73. United put in one of the most complete performances by any team all season, as they put 108 points on the board, a competition high in NBL22.

Seven United players finished in double figures, with Caleb Agada leading the way with 17 points, and Shea Ili had 15 points off the bench.

Matthew Dellevadova was the only member of the starting lineup not to make it to double figures, but his nine assists show that his efforts were focussed elsewhere as his teammates thrived.

Peyton Siva and Hugo Besson each scored 17 for the Breakers, and only one other player managed double figures for the New Zealand side who didn't have any fast break points for the match.

JackJumpers for joy with shooting clinic

The Tasmanian JackJumpers has recorded a 96-86 upset of the Illawarra Hawks, after making a league-record 22 three-pointers across the game.

Josh Adams led the way with eight of them, on his way to 28 points, while Josh Magette had four threes and 16 points to help out.

Sam McDaniel had 20 points, with eight of nine shots scoring, and 4-4 from distance, as he came off the bench to torch the Hawks.

Xavier Rathan-Mayes was just a solitary assist away from a triple-double, as he finished with 12 points, 10 rebounds and nine assists.

The Hawks were not able to keep up, making just four of their 22 three-point attempts as a team, shooting 18 per cent compared to an incredible 52 per cent for the JackJumpers.

Duop Reath fought hard, as he had 25 points and nine rebounds for the Hawks, but it wasn't enough.

Round 13 kicks off on Thursday night with the Cairns Taipans facing the Brisbane Bullets.