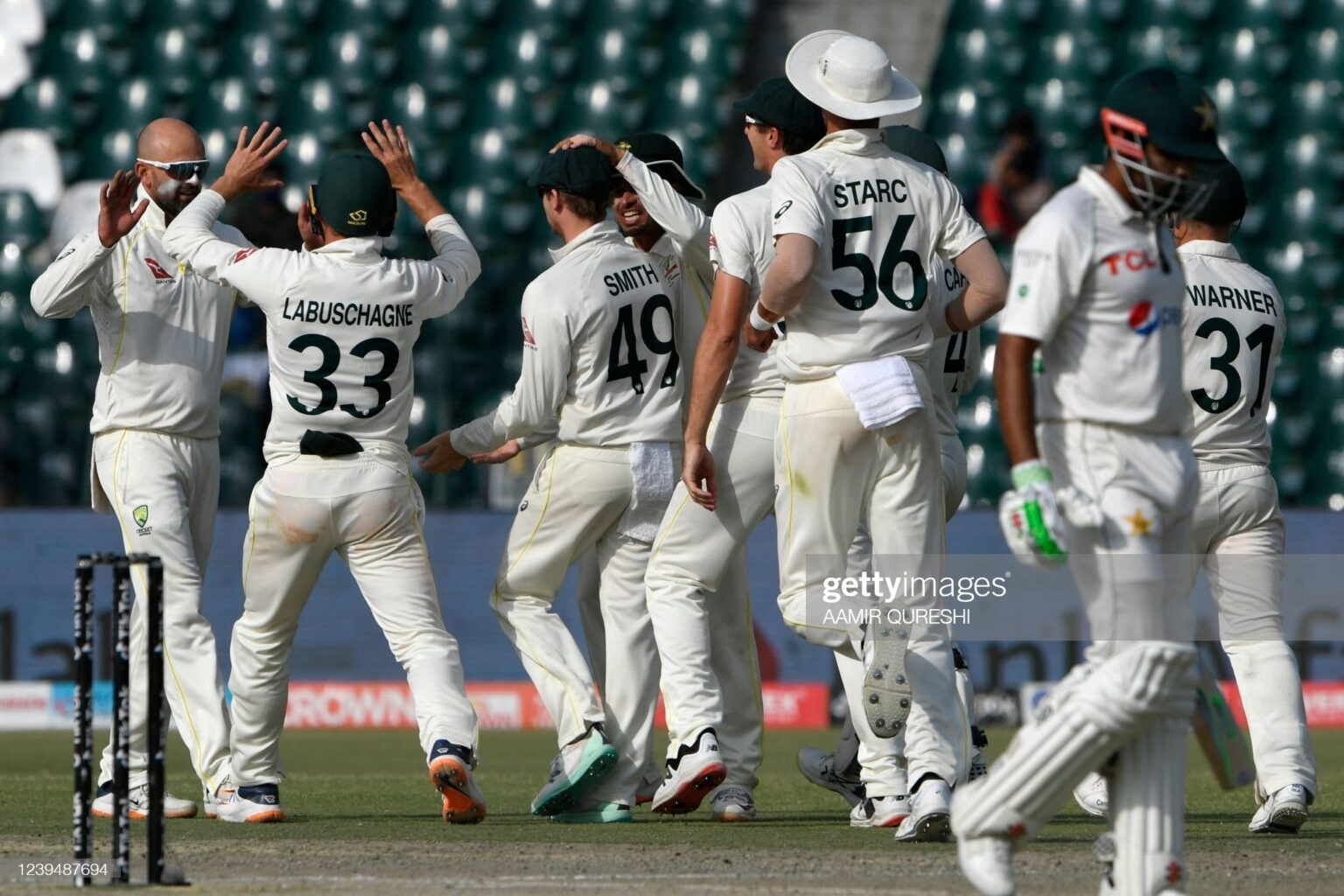 Nathan Lyon bowls Australia to a series victory in Pakistan

After alot of cricticsim over the last couple of years the day came for Nathan Lyon as he bowled Australia to victory on day five with a five wicket haul.

Nathan Lyon bowls Australia to a series victory in Pakistan

After alot of cricticsim over the last couple of years the day came for Nathan Lyon as he bowled Australia to victory on day five with a five wicket haul.

After 15 long days of this series and two very long draws, Australia finally made the breakthrough in the last couple of hours of the final day as Nathan Lyon took five key wickets. After a lot of talk about who would win this Test that was in the balance, Australia will take the Benaud-Qadir trophy home winning the final Test by 115 runs.

Pat Cummins spoke of the win after the match.

“One of immense satisfaction from me, everyone is totally allayed. Winning an Ashes series was huge but winning away doesn’t happen, it’s been a big toll over the last 25 days. To come away with a series win is hugely satisfying.

“I would’ve like one or two wickets with the new ball, but the trend was with the first 30 or 40 overs with the ball it was hard to take wickets and then it gets easier. But I knew to bat at 3 an over for over 100 overs they were going to have to bat pretty well.”

After a lot of criticism over recent year Nathan Lyon has proven more than his worth bowling Australia to victory on day five in Asia taking 5/83. His fourth innings average has now dropped to 29.20 better than his overall average which now sits at 32.15.

While it doesn’t make a huge difference in this Test, Lyon proved he is by far the best Australian spinner after his teammate Mitchell Swepson barely bowled on day five. And while Swepson did take a good catch his figures of 0/36 from 10 overs in the fourth innings just weren’t good enough, in fact he didn’t take a wicket all Test for figures of 0/78.

Nathan Lyon though was incredible firstly taking the key wicket if Imam-ul-Haq for 70 before ripping through the key middle order of Azhar Ali and Babar Azam as Steve Smith took a couple of important catches. Two late wickets made sure he took his 19thfive wicket haul of his career and first since New Zealand in Sydney of 2020.

“It’s not as spinning conditions as we will get in Sri Lanka but on past Asian tours I’ve been on there has been a lot of talk that we needed to change our gameplan. But if anything, it’s affirmed that our gameplan will hold up.” Cummins said of the spin and Australia’s game plan.

Lyon wasn’t the only one to bowl well and take important wickets, there was a huge effort by Pat Cummins especially with reverse swing in the second and third session that decimated the Pakistan line up.

Cummins swung two balls in further than many, in fact it was somewhat reminiscent of Waqar Younis or Wasim Akram that took so many great wickets with reverse swing in Pakistan. Firstly, it was Fawad Alam to go, and he wasn’t all that happy about it, he seemed to think that the ball tracking didn’t consider the fact it was an off cutter. No matter what the DRS issues where it didn’t matter as he was sitting in the changeroom only minutes later.

Next up it was Mohammad Rizwan who had his big toe crushed and didn’t divide to take a review. A review is what should’ve come though because he was hit well out outside the off stump, but he seemed pretty keen to get off the field. Babar Azam is also partly to blame for not making sure the review was taken.

Mitchell Starc also chipped in with a key wicket of Sajid Khan, but his role was more to do with how well he bowled to put on the pressure. Pakistan’s batters could barely score off of him apart from an over of 14 that was risky and eventually led to the end from Sajid Khan.

“The way both Cam and Mitch bowled, I had complete confidence that they would go at two an over. And Nathan he bowled as well as I’ve ever seen him, I could just stick him up one and he would go at two per over.” Pat Cummins said of his bowlers.

Rightly though it was Pat Cummins to take the final wicket by ripping out the middle stump of Naseem Shah. Cummins has been incredible all series to take 12 wickets in the series at an average of 22.50. Cummins was also named player of the match for his three in the first innings and five in the second as well as his excellent captaincy.

The captain also spoke about how huge this win is for his side.

“We won in the Ashes but to be really tested overseas the amount of confidence we will take from this is huge. Every player took someone and showed their skills in Asian conditions with tours of Sri Lank later in the year and India next year this is huge.”

There were no surprises in the presentation when Usman Khawaja was named player of the series, his lowest score was 44* and he wasn’t dismissed for under 91 since coming back into the Australian team.

It’s truly a fairy-tale series for Usman Khawaja who returned to the country of his birth after 30 years to not only take home the trophy for the series but the player of the series trophy. He has no doubt made his family proud and all of Australia proud. With a couple of more Tests in Asia coming up this year he is well primed to break all kinds of records.

Pakistan also deserves a great amount of praise for the way the series was played. Abdullah Shafique, Babar Azam, and Imam-ul-Haq all averaged over 70 in the series with six centuries being hit in their side in the three Tests.

Naseem Shah was the only full-time bowler to average under 30 though and that is where Pakistan lost this Test. They didn’t quite put the pressure on the Aussie batters particularly on day four when Australia was searching for declaration runs.

Australia will now turn their eyes to the white ball leg of the series with three ODI’s and three T20’s to be played albeit with an under strengthened Aussie side. Pat Cummins, Josh Hazlewood, Glenn Maxwell, and a couple of others are set to miss the series as they prepare for the IPL.

Overall, though in this series it was just great to see Test cricket in Pakistan once again. The fans were great the cricket was great but what will get talked about most will be the pitches which were honestly pathetic.

The first ODI is set to get underway in only four days’ time as Aaron Finch looks to make this a sweep with white ball and red ball cricket in Pakistan. The white ball games will be a little more difficult for the Aussie fans to watch with matches starting at 9pm AEDT.