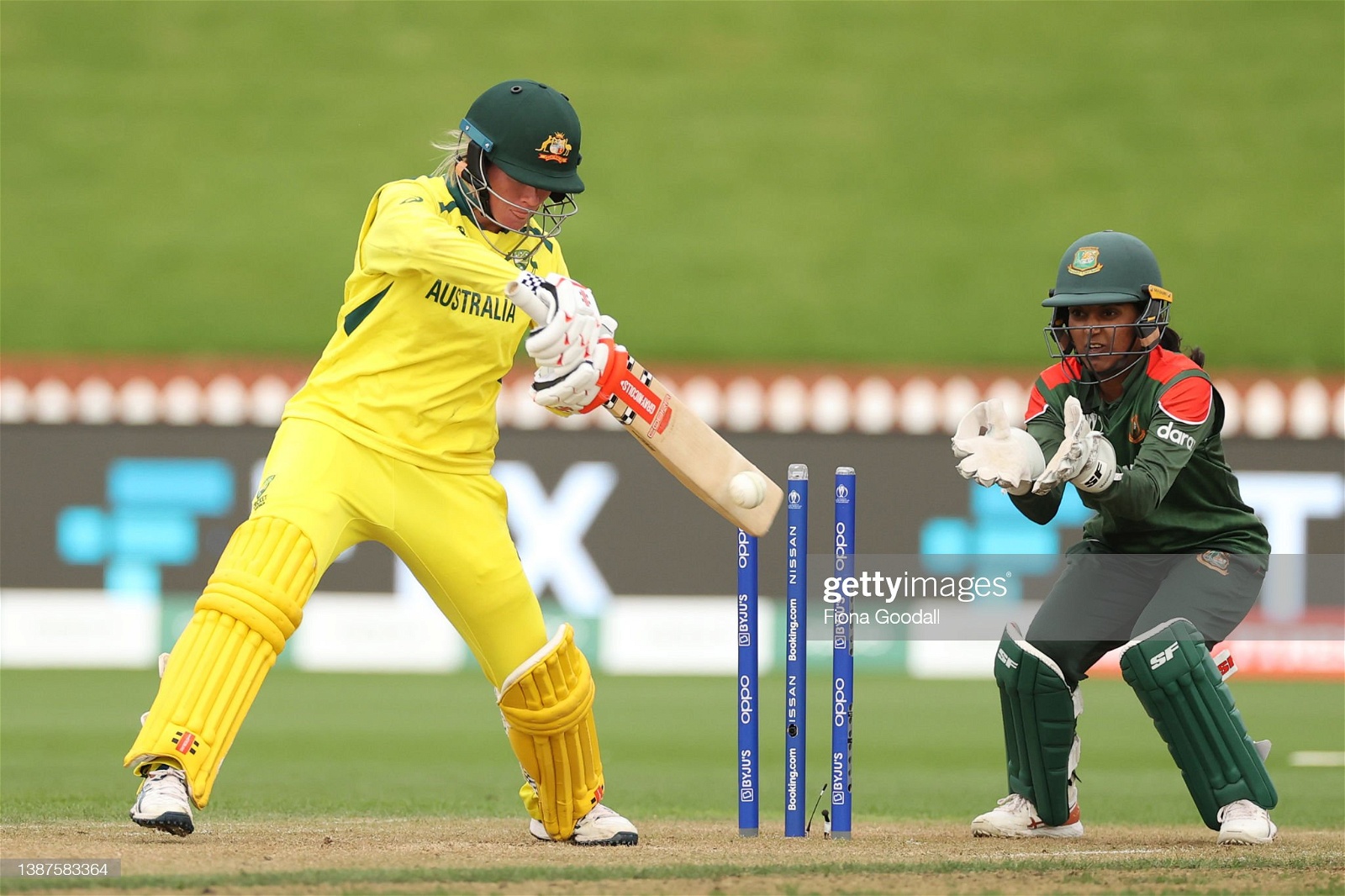 A 66-run outing from Beth Mooney helped Australia to a five-wicket win over Bangladesh, continuing an unbeaten run through the preliminary stage of the Women's Cricket World Cup.

A 66-run outing from Beth Mooney helped Australia to a five-wicket win over Bangladesh, continuing an unbeaten run through the preliminary stage of the Women's Cricket World Cup.

A wet and windy Wellington day was just a backdrop to another stellar win for Australia, who goes through the preliminary stage of the Women's Cricket World Cup unbeaten in seven matches.

Beth Mooney made another half-century with the bat, continuing her impressive match-winning efforts this World Cup, which followed a superb performance with the ball from Jess Jonassen.

Speaking after the win, Mooney was happy to do her job and complete the chase for her team, but key to it was riding out Bangladesh's high from taking early wickets.

"I think just taking the sting out of [the game was key], obviously Bangladesh being pretty highly emotional at that point, having taken two or three wickets in a row," she said.

"We know that that's sort of what they get like, what teams get like, when they're on a roll, and they take a few wickets, they ride on that emotion a little bit.

"So I sort of just knew that we needed to build a partnership somewhere along the way to take the sting out of that a little bit, come sometime strong, but obviously we lost a couple more wickets than we would have liked, but I thought Bellsy (Annabel Sutherland) came out and played really mature."

Teams did not arrive at the ground until after the original start time of 11am local time. A delay was expected after rain ruined Thursday's contest between South Africa and West Indies, but thankfully Wellington saw some cricket today.

Finally, at 12.30pm local time (10.30am AEDT), the toss was won by birthday girl Meg Lanning, who elected to bowl first. The only change to the XI was the inclusion of quick Darcie Brown for Ellyse Perry, who missed the match after back spasms in the South Africa game.

The match was reduced to 43 overs per side, with a nine over Powerplay.

The opening Bangladesh partnership of Murshida Khatun and Sharmin Akter Supta started solidly against the Australian bowlers, putting together 33 runs before Khatun fell to Ash Gardner, caught by Rachael Haynes for 12.

Fargana Hoque Pinky only scored eight runs, but it was enough to surpass 1000 runs in ODIs, a feat no other Bangladesh woman has achieved before. She was caught behind by Alyssa Healy, off the bowling of Annabel Sutherland.

Akter put on 24, before she was trapped LBW by Jonassen, the result of very good, tight bowling from the Australians.

In 43 overs, Bangladesh managed to put on 135 runs, while Gardner and Jonessen picked up a pair of wickets each.

Jonassens' two wickets came from a nine-over spell, which included three maidens at the expense of just 13 runs.

After the break, Healy and Haynes were in the middle to get the chase started for Australia, and it was going beautifully, until Healy was caught by Alam at deep square.

From there, a peach of a delivery got Lanning for a duck, and then an excellent catch by Pinky sent Haynes back to the dugout as well. Australia was 3/26, chasing 136.

Tahlia McGrath lasted a couple of overs at the crease with Mooney, but only managed to put three runs on the board before she was trapped LBW by Nahida Akter.

The combination of Mooney and Sutherland stood up, the former making the runs and the latter playing a supportive role, while hitting boundaries herself.

Light was playing a factor, the grey, darkened skies making it difficult to see the ball. Mooney managed her way to a 66-run effort that sealed a final preliminary stage victory for Australia.

The five-wicket victory sees Australia move through to the semi-finals unbeaten, with another win in different, challenging conditions under the team's belt this campaign.

Speaking after the match, player of the match Mooney said they were really very challenging conditions, commenting that "it was a bit dark out there" as the chase wrapped up.

"It was a difficult chase in the end. I thought Bangladesh bowled extremely well, and obviously the conditions weren't that favourable", she told.

Batting out a win, in such challenging conditions, was just another example of Australia being able to find a way to get a victory, showing the strength of its entire squad.

Asked whether the match had prepared them to potentially play in the conditions again, Mooney said "absolutely".

"Obviously, we're not sure if we're going to play the semi-final here in Wellington or in Christchurch, so we could be thrown those conditions again," Mooney said.

"If we do play the semi-final here and obviously with the late start as well, and not losing too many overs, with no lights being here in Wellington it can make for quite a dark second innings once we're out there.

"So to be put under some pressure and play in those conditions and be able to learn from it, have that kind of pressure thrown at us leading into a semi-final is absolutely critical."

Preliminary matches will continue over the weekend, before Australia is back in action for the World Cup semi-finals on March 30 and 31, with the final on April 3.