The theme at this years Met Gala was Gilded Glamour and while we got some of the best Met Gala looks we've seen to date, some missed the mark. 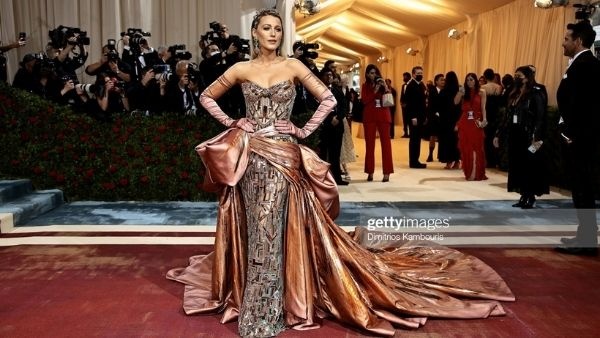 The theme at the 2022 Met Gala was Gilded Glamour and while we got some of the best Met Gala looks we've seen in a while, as always, there were still some thatreallymissed the mark.

The Queen of the Met Gala has done it again in a stunning transforming Versace gown. Blake Lively started out channelling the iconic Chrysler Building, that revealed a stunning blue extended skirt that represents Lady Liberty's now iconic oxidised blue hue. Topping the metamorphosis with a glove reveal, Lively has, as always, eclipsed the show. We would have loved a smoother, more seamless reveal, but it is also pretty on theme to have your lackeys make it happen for you.

Jamaican-born designer Edvin Thompson shows up all the male guests who took the theme 'white tie' too literally. Yes we know the tie is not white, but he is absolutely dressed for the occasion in Thom Browne, and adorned from head to toe in Johnny Nelson jewellery. Thompson appeared at the 2021 Met Gala repping his own brand, Theophilio. This year, he proves that he can rep others just as well.

Cynthia Erivo looked a vision, dressed in a Louis Vuitton textural melange of white lace and feathers. Her headpiece really tied the look together, both aesthetically and thematically. Erivo explained that the head scarf is actually a sheet, inspired by 19th-century African American women who were required to cover their hair. Also, we mustn't forget to shout out her amazing nails, done by Gina Oh.

Billie Ellish understood the assignment with a beautiful piece of couture which is everything that we were asking for. The Gucci design takes us back to the ton with the outfit giving those Bridgerton inspired vibes. Many have already noticed that the dress is a nod to a portrait of Madame Poirson painted by John Singer Sargent in 1885.

Lizzo absolutely served in her Thom Browne look. It was an outfit meant for a queen pairing a black silk moiré exaggerated hip corset dress and dropped skirt with a regal black robe embellished with beautiful golden florals. We also love that the flute made an appearance.

Evan Mock's cream-coloured suit effortlessly combined wonderful tailoring with the intricacies of corsetry. The look was designed by 2022 CFDA/VogueFashion Fund finalist Head of State, which was founded by Nigerian-born Brooklyn-based designer Taofeek Abijako when he was still in high school. The tulip collar and shock of pink hair keeps the look funky fresh.

Taylor Hill was only one of the many amazing blue looks that graced the Gala, arriving in a full-on hand-painted Miss Sohee ensemble. Those boots! That embroidery!

Paapa Essiedu gives a masterclass in accessorising with his look. The oversized velvet tuxedo with satin lapels from genderless label Veert was already a win. Pairing it with emerald body jewellery in place of a shirt just takes it to the next level.

Let it be known that Met Gala regular Sarah Jessica Parker absolutely aced the assignment. Her Christopher John Rogers plaid and taffeta gown is an homage to Elizabeth Hobbs Keckley, a former slave who became the first Black female fashion designer in the White House. And with a Phillip Treacy headpiece to boot.

Cardi B looked absolutely stunning in her Versace gown with the sewn on gold detailing really hitting the Gilded Glamour theme out of the park. As well as the accessories and her hairstyle really making her stand out as one of the best dressed this Met Gala.

Going into the Met Gala, we explicitly said that we didn't want to see was those Great Gatsby-inspired outfits and that's exactly what we got from Emma Stone, in Louis Vuitton. Anachronistic flapper looks are guilty of being cliche and historically inaccurate. That she is re-wearing her wedding reception dress is the least of our concerns. In fact, given the wrath of overconsumerism, we actively encourage it.

Just because the collar of his coat is flipped up, we're not going to let him get a pass. It would be great to see Mendes in some different silhouettes rather than a normal suit with a coat over the top. This coat is kind of nice, but absolutely not interesting enough for the Met Gala.

Cabello mentioned that Prabal Gurung's design was entirely "up-cycled and sustainable", which deserves an applause. But perhaps it needed a couple more sessions at the drawing board. The skirt looks ill-fitted and lacking structure to hold such a large floral ruffle. And something about the proportions of the top and the criss-crossing straps is off too.

In Addison Rae's second Met Gala, she's made the deadly sin in fashion of making the same mistake twice, with her outfit not working in with the theme. While the dress would be suitable for a red carpet, it's not one that's relevant for the Met Gala or Gilded Glamour.

Let's start by saying that denim can be done so well, particularly within the theme of American fashion. But when it came to Kodi Smit-McPhee's denim on the red carpet, Ashton Sanders did it better in his gilded denim look, complete with fangs and coloured contact lenses.