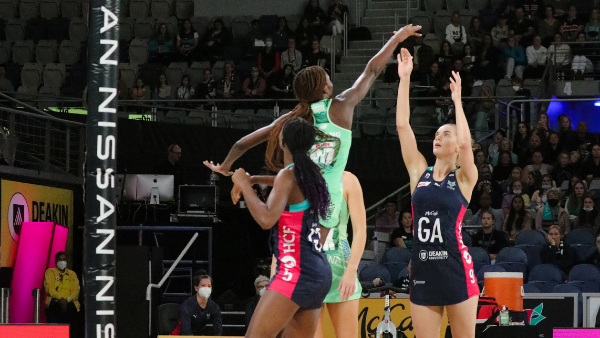 The Melbourne Vixens put out a strong performance against the West Coast Fever in a top of the table clash with the hosts finishing nine point victors.

The Melbourne Vixens put out a strong performance against the West Coast Fever in a top of the table clash with the hosts finishing nine point victors.

The Melbourne Vixens put out a strong performance against the West Coast Fever in a top of the table clash with the home side coming out nine point victors over the Fever.

West Coast Fever got off to the perfect start, with an offensive contact call on Vixens co-captain Kate Moloney the Fever getting out to a three goal lead early before a goal from Kiera Austin was able to get the home team on the board.

Back to back goals from the Vixens saw the sides draw level with eight minutes to play in the first quarter. A turnover in the Fever front end allowed the Vixens to get one point ahead at the start of the five, with Fever calling a time out to try and prevent momentum going the Vixens' way.

A turnover call from Sasha Glasgow gave the Vixens the chance to pull ahead with a three-goal lead but an overcooked pass on the sidelines saw the ball back into the hands of the Fever.

Glasgow then made up for her past mistake with a Super Shot to level the score with three minutes to play. The Vixens quickly responded down the other end with a Super Shot from Kiera Austin bringing the margin back to two.

The Vixens pulled out to an eight-goal lead early in the first quarter, with the Fever bringing on Stacey Francis-Bayman to try and reduce the impact of Austin.

The Fever were able to get momentum back and bring the margin back to just three points with the Vixens calling a timeout to stop the Fever's run but an early turnover on the edge of the circle just after the time out saw the ball going back into the hands of Fever.

Olivia Lewis came on in goal keeper in her first match against her old side but with just three minutes to play in the second quarter the Fever were able to regain the lead thanks to a goal from Jhaniele Fowler.

Rahni Samason came onto court to try and bring back the spark with just under three minutes to play and was able to get the Vixens first goal since the timeout and get a Super Shot of her own to level the score.

Samason was the spark that the Vixens needed with the Vixens scoring four consecutive Super Shots to finish the half time break with a five point lead.

An intercept from Olivia Lewis saw the Vixens transition down the court to start the third quarter but a pick up from Verity Charles saw the Fever regain possession and go back down the other end.

Emma Cosh came on at goal attack and brought that injection of speed into the goal circle and immediately made an impact shooting a long range shot.

Mwai Kumwenda kicked off the power five in the third quarter bringing the margin out to nine points.

A tip from Emily Mannix saw Lewis pick up the scraps and send the ball down the other end where Austin was able to extend the Vixens lead by ten.

Vixens' coach Simone McKinnis said that she was happy with Lewis’s performance throughout the match.

“One thing that Liv does really well is she just goes for the ball,” McKinnis said post match.

“She attacked it from the moment she stepped on which was great. It’s a hard game against the Fever, hard work to be done and it’s making the most of the opportunities that come from that hard work that’s done."

Glasgow two super shots to bring the margin down to eight points going into the final break of the match.

A footwork call from Fever in their goal third saw the Vixens pounce, bringing the margin out to 11 points with the Fever calling a timeout in an attempt to stop the Vixens momentum.

The Fever made a few changes out of the time out, bringing Rudi Ellis on into goal keeper, Courtney Bruce out to goal defence and Sunday Aryang into wing defence.

An intercept from Lewis, and Austin capitalising with a long-range shot, saw the Vixens extend their lead to 14 goals with seven and a half minutes remaining in the game.

McKinnis was pleased with the consistency that the Vixens were able to maintain for the whole 60 minutes of the match.

“As it is always with Fever, it’s a really really hard, tough game. They’ve been playing some super netball, we just knew it was going to take the work across four quarters.

“I thought there were some super performances across the match. I was just really pleased that we again maintained the work rate, generally, for the four quarters.”

Fever Coach Dan Ryan felt that the Fever took a lot away from the match and will hold them in good stead going into the next time his side meets the Vixens.

“I think it was a tough match for us, the only way you can beat the Vixens is by being at your very best,” Ryan said post match.

“So, I think really valuable to feel them early in the season and see where we’re at up against them.

“Knowing that we’ve had a pretty hectic week leading into it, but certainly we just weren’t as sharp as what we needed to be today against a top-quality side with world-class players. We battled hard, but just weren’t good enough today.”

Despite a disappointing loss, there were still a few positives for the Fever, but they weren’t able to maintain the standard for a full 60 minutes

"We competed well, we started the game pretty well. Obviously disappointing to be a little bit further down than what we would’ve liked in that first quarter but I thought our response in the second quarter was very strong, and realistically, we should’ve been up at halftime.

“I think that would’ve made a bit of a difference to how we attacked the third quarter. Some missed opportunities there and that’s on us. We just didn’t have what it took tonight to run with and enjoy the Vixens. Full credit to them, they were a class above tonight.”