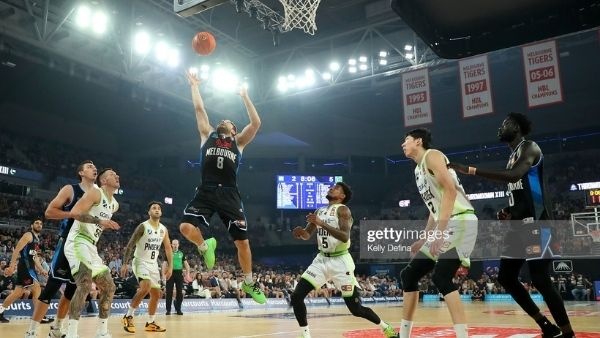 Melbourne United 'locked in' ahead of Throwdown with the Phoenix

Melbourne United are looking to remain at the top of the NBL table as United takes on cross town rivals in the South East Melbourne Phoniex.

Melbourne United 'locked in' ahead of Throwdown with the Phoenix

Melbourne United are looking to remain at the top of the NBL table as United takes on cross town rivals in the South East Melbourne Phoniex.

After a win over the Perth Wildcats saw Melbourne United reclaim the top spot on the NBL ladder the side is fully intending to stay that way as they gear up for the clash with cross-town rivals in the South East Melbourne Phoenix.

Captain Chris Goulding and Matthew Dellavedova spoke to the media this week ahead of the Throwdown at John Cain Arena.

Once again the side will have to be on their a-game as every side wants to knock off the reigning champions.

"If you're not at a really high level you're going to get beat.

"There's too many good teams in this league and you know, when we're sitting at the top of the ladder or you know we're coming off a championship-winning season, everyone wants to beat us.

"So if we're just that little bit off we're going to get beat so it's been a reckoning for us. Over the past however many weeks of the season, we're getting every team's best shot every night and you've seen a couple of times if we're not there with our defence and we're not as sharp offensively plain and simple you lose."

While the rivalry isn't something that is being hyped up within the side, Goulding said that it's a rivalry that is good for the league.

"I didn't play the last time so I had a pretty good view of it from the sidelines but I think everyone outside of the playing group will probably pump it up more so than us.

"We're pretty locked in, in the fact of wanting to get where we want to and wanting to stay at the top of the ladder and playing away that's going to keep us there which will hold us in good stead for the back end.

"So in that regard, it's another game, but it's a game on our home court against the other team within the same state.

One moment from the last time that these two sides met that stood out was the dunk from Phoenix star Mitch Creek on Dellavedova.

"I mean, it got a lot of views on social media and worldwide reach., you got to thank both guys it was a fantastic dunk.

"Delly, a global name global superstar when something happens with him good or bad it's gonna go around the world. You know for the league and for their social reach and the notoriety of the league it was great. "

While for Dellevadova the dunk isn't something that he was too concerned about.

"I've been working in a gym with our strength and conditioning coach on some more plyas so we'll see what happens."

United was without key personnel in Goulding and Jack White last time these two sides met with the pair making a big difference since their respective returns.

"Whitey [Jack White] has been unreal since his comeback. I think just his defensive intensity rebounding ability to run the floor, guard multiple positions he's really provided a lot for us and it's fun having him out there.

"Then CG [Chris Goulding] we all know what he provides and those two are big pieces."