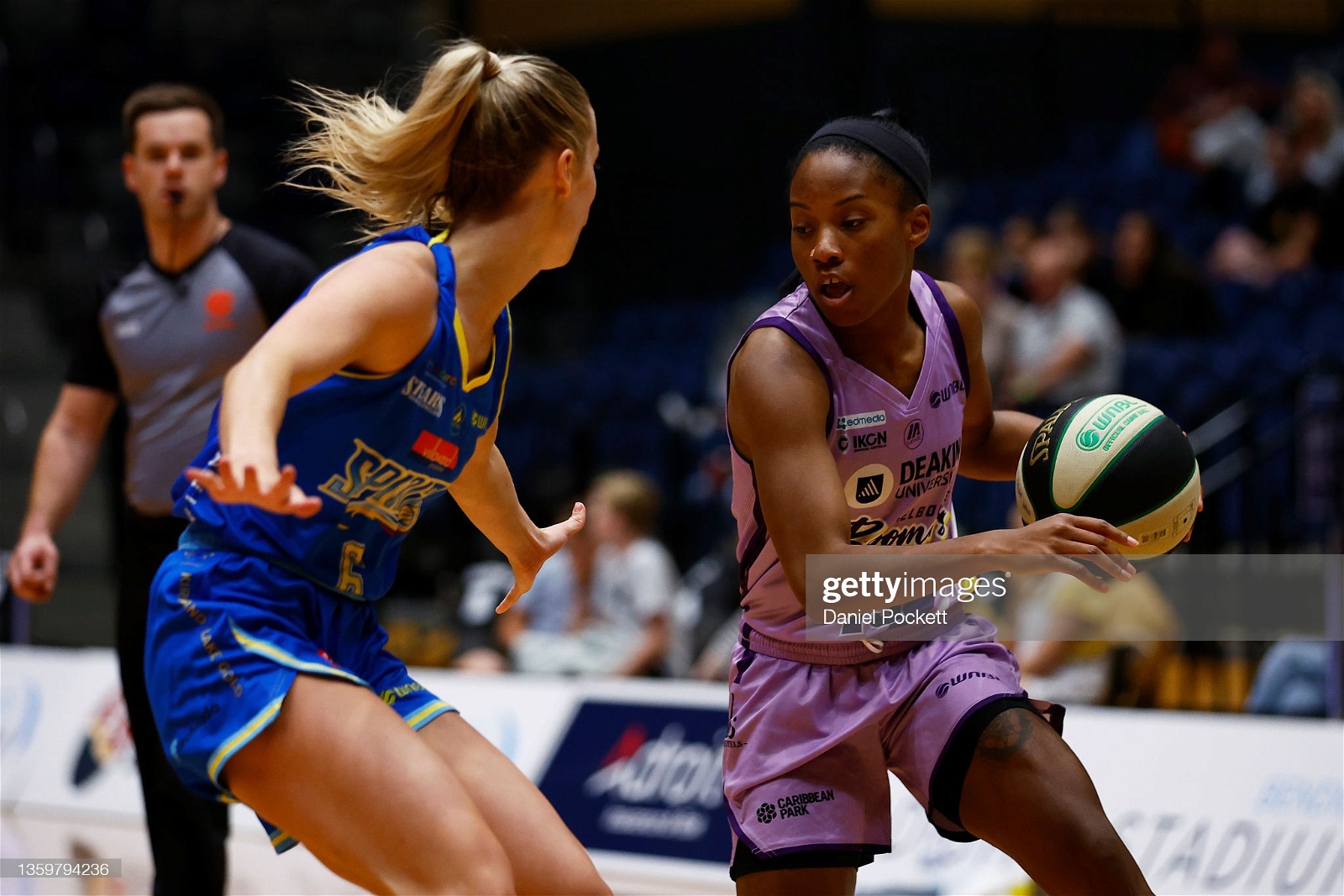 Lindsay Allen has called the Melbourne Boomers home for three seasons of the WNBL, with Allen playing a key role in the clubs success this season.

Lindsay Allen has called the Melbourne Boomers home for three seasons of the WNBL, with Allen playing a key role in the clubs success this season.

American International Lindsay Allen has called Melbourne her home during the summer, pulling on the purple for the Melbourne Boomers during the WNBL for three seasons.

Lindsay Allen spoke toEdge of the Crowdabout her decision to return to the Boomers for the 2021/22 season as well as how the side is going in 2022.

Allen first joined the Boomers for the 2018/2019 season after a pretty successful season with the Las Vegas Aces in the WNBA, with the decision to join the WNBL coming sooner than she expected.

"I think it was just kind of the league overall that drew me I knew I wanted to get out and play in Australia at some point because I've heard so much about the country, just kind of lifestyle and all that sort of stuff," Allen said.

"It happened sooner than I thought it would, just in terms of like my playing career. But yeah, I think it's been a great experiences and I've been enjoying myself."

Allen missed the 2020 bubble season due to the pandemic but coach Guy Molloy had a role in getting her to come back for this season.

'When it came down to it, this is a very attractive place to come back to because Guy was still the coach and a bunch of my teammates and the core of the group would be back. Cayla George, Ezi [Magbegor] and all those kinds of people, so it was just the kind of a place I wanted to get back to.

"I knew that Tiff [Tiffany Mitchell] would be playing with me as well, we built a relationship over the summer in the WNBA. So it's just kind of yeah, this is the right fit for me for the overseas season."

Indiana Fever teammate Tiffany Mitchell joined Allen at the Boomers this season with the pair forming a tight relationship over the WNBA season, which has already shown in Boomers matches.

"It's been good just getting to Tiff from my time in Indiana before I came here and learning, you know who she is as a person but also her style of basketball and who she wants to play and all that kind of stuff.

"I think it's helped us here because we just have such a close relationship where I feel like we can talk about anything to each other and in a really respectful way as well.

"So if there's anything she sees she's talking to me about if there's anything I see I'm talking to her about it. So just kind of a really good dialogue back and forth, I think between me and her and we're just able to kind of mesh well together and just be where the other person or teammate needs them to be."

Molloy has been at the helm of the Boomers since Allen joined the club, and with this season being his last, there is motivation to send him out on a high.

"Guy's been a big part of just my evolution as a player and as a person. He's taught me so much about the game of basketball and I think he's just such a great basketball mind.

"It's been great to be coached by him but also he just supported me and has just supported everyone he's ever coached and in just such a unique way that he's been one of my favourite coaches.

"I think every season we play here with the Boomers, we're playing for a championship. This being guys last season, of course we want to do it for him but it doesn't add any pressure in that way.

"We're still wanting to play the games that we want to play them and in the Boomers way, and then obviously send him off in the right way."

KELLY WILSON TO WRITE HER NAME INTO THE WNBL HISTORY BOOKS

It's been an up and down season for the Boomers so far, currently sitting second on the ladder with four wins and two losses.

"I think it's been good, I think it's about not really where we expected to be or want to be, but I think it's just kind of the way we see the season kind of flowing and waxing and waning and all that good stuff.

"We have a lot of talent on this team and so it's just about making those pieces fit and how we can kind of maximise everyone's talent at the same time and making sure that you know, we're not looking away from someone or we're not going away from them or anything like that and making sure we were using our players off the bench as well because they're equally as talented and they work equally as hard as we do.

"So we're just trying to figure out how we fit the pieces so to speak, but I think Guy's done a really good job just kind of tweaking things week to week and just kind of seeing where we are and also seeing who we're playing against."

The Boomers last match didn't go the way that they'd hoped, going down to Adelaide Lightning by 12 points but the Boomers were able to take lots out of the match.

"The game against Adelaide was just kind of us trying to figure out how we can still score and how we can still you know play our brand of basketball even though we're not shooting the ball well.

"So I think, you know, you want to start the game off and you want to kind of set the tone for your team and how you want the game to go. So if you give the other team a chance to set the tone and the team as talented as Adelaide is, at home you know they kind of took it and ran away with it. "

"So I think we do a better job of settling into our stuff and making sure that we're still getting good shots, even if we're missing and that we have a good flow to what we want to do, both on offence and defence."

Between the match against Adelaide and the Boomers next match against the Southside Flyers, they've had a 17-day break due to Covid. Allen said that it's something the Boomers and the rest of the competition have had to adjust to.

"We talked about it at the beginning of the season, it's the team that can handle Covid the best throughout the season, will end up being the most successful.

"It's unfortunate that games are getting cancelled and postponed and people are getting sick but we've kind of have to roll with the punches right now and just control what we can control."

The Melbourne Boomers' next match is against cross-townrivals in the Southside Flyers at 5.00 pm tonight back on the home deck at the Melbourne Sports Centre.