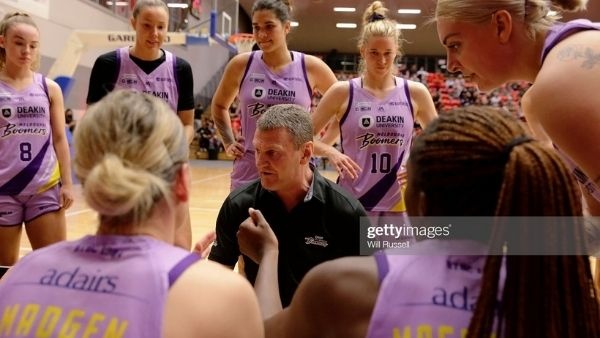 While the first game was disappointing for the Boomers going down to the Perth Lynx by 27 points (98-71) at the Melbourne Sports Centre in Parkville. The Boomers were able to peg the series to one all after a nail-biting one-point win over the Lynx in Perth (76-75).

“We were clearly thumped in game one and in the loss really stung everybody,” Molloy told Edge of the Crowd

“We know Perth's a great team and they put forward one of their best performances for the season and we put forward one of our worst. So I think that that gave us a bit of confidence we knew we could respond in game two and do a hell of a lot better.

“We changed a few things around and credit to the team. I was really proud of him coming away with the wind and just setting up a fantastic game three showdown."

One of the Boomers' strengths this season is the side's depth that can come off the bench and make an impact. Molloy said the decider can’t be won with just the Boomers starting five players.

“You just don't do it with five players alone and the quality of the rotation that we have is essential because fatigue is a real factor now.

“Both teams have had pretty horrendous travel days from Perth back to Melbourne. Probably from the time of getting up to the time of landing in beds. It's been 13,14 hours for both teams in the present travel climate that we have.

“So I just think that fatigue is a factor. Starting fives alone aren't going to do it. You know, it's a whole team effort.”

For the Boomers to take out the championship they will have to shut down the Lynx players that are making an impact on the scoreboard like Marina Mabrey and Darcee Garbin.

“The signature style for us is much more based around our defence and I think that Perth is really renowned for just having a very high powered offence and shooting ability. So we need to guard them very well.

"We have to pay a lot of attention to how we guard because of the stars that they have and then at the other end we have to execute very well and give them enough challenges to solve defensively themselves and we hope that we can do that."

This season will be Molloy’s last at the helm of the Boomers after nine seasons at the club and while leaving with a championship will send him off on a high note, Molloy wants to win the championship for the team and the club.

“It's actually my third grand final series and I'd hate to go away empty. It's not about me. I understand that it's about the club and everyone involved in the club and that's who I really want it for.”

“It's not so much a personal thing for me. I just would love the club to enjoy that success. For just all the adversity we've faced over the years and the difficult times and the way we've come through it to find ourselves where we are now.”

In terms of legacy, Molloy wants to leave the Boomers in a better place than when he started with the club back in 2013.

“I think standards is the word that comes to mind, we started sweeping the floors ourselves in a little local primary school in Donvale, that's where we used to train.

“Now in terms of women's basketball in Australia, we're the standard-bearer for so many things on the court and off the court.

"I would hope that the legacy left for the next person to move into the head coaching role is that it's just able to catapult them and the club into the next stage of its future which will be very bright."

The Melbourne Boomers take on the Perth Lynx in the deciding game of the 2022 WNBL Finals series at 5 pm Saturday night at Melbourne Sports Centre in Parkville.